A Disciplined Ballerina’s Passion to Perform 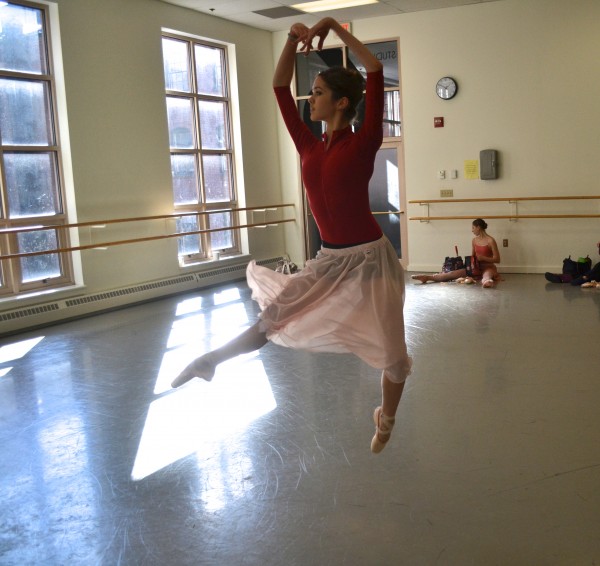 Brittany Stone stands in first position, both feet turned outwards creating the letter “v.” She stretches forward, her arm shaped in a crescent moon, and leans to create a 90-degree angle with her body. Stone rests in this position for two minutes while moving her right foot from planted flat on the ground up into an arch, allowing her toes to take all the pressure of her weight while the sole of her foot creates an a letter “c.” She repeats this movement with her left foot.

Stone, a 21-year-old from East Hartford Conn., always dreamed of being a ballerina.  After entering the world of dance at age 6, she progressed quickly in her talent and now is a member at the Boston Ballet, where she dances in the ballet ensemble called the Corps de Ballet.

“This is a dream job,” Stone said. “It’s something I always kind of hoped will happen and it came true.”

She is petite, slender and wears uniform of a simple leotard and a bun. In her morning warm up class, Stone extends from her 90-degree position to straight up with perfect posture. Her round, brown eyes focus intensely on an unknown object directly in front of her while effortlessly moving through each warm-up motion.

“Dance is something you have to be very disciplined to do,” Stone said. “It’s mentally and physically draining.”

When Stone was 13, she was invited to join the American Ballet Theatre Jacqueline Kennedy Onassis School in New York City. This decision moved her, her mother and younger brother to the city while her father and older brother remained in Connecticut. For a young artist, this school works to produce superb dancers who have no technical limitations and are sensitive to different qualities of movement necessary to correctly execute the classical, non-classical and contemporary dances, according to its mission statement.

“Making the decision to move was really hard, especially for my family because we had to split up,” Stone said.

Stone knew she was making a life-changing decision to move at 13 years old for a career, aware this was a decision that most young adults don’t face until 17 or 18 years old when choosing what college to attend.

“[My life] is a lot different than what it would be if I didn’t dance,” Stone said. “If I just went to school and then college. It’s backwards.”

Ballet Master Larissa Ponomarenko has been teaching at Boston Ballet since 2011 and has worked with Stone for countless hours.

“Brittany’s a beautiful dancer,” Ponomarenko said. “She hasn’t been formed into a particular dancer yet and has a lot of potential to move forward.”

In the world of dance, a ballerina usually does not have longevity. Simply reaching the age of 40 or snapping an ankle can end a career and force a dancer to find a new outlet or means of income. Because of Stone’s disciple to perform, she tries not to let unknown factors in a ballerina’s career affect her dance and performances.

“I just love being on stage.” Stone said. “You can rehearse something to no end but getting on stage, getting on stage is why I’m doing it. It’s really hard in the studio rehearsing every day, but that feeling is like nothing else.”

Although Stone does not foresee a life outside of ballet, she’s currently taking a class at Northeastern as part of a comprehensive educational program that help professional dancers earn college degrees to help prepare them for careers after dancing.

“I’m working now and I’ll get a degree later on,” Stone said.

The program, called Northeastern University-Boston Ballet Education Program, allows Boston Ballet dancers to take courses online or in class over a long period of time to get a degree. Stone is currently taking one class online each semester to finish her general education requirements.

The self-proclaimed procrastinator said that although having the opportunity to get a college degree while dancing is a unique advantage that the Boston Ballet offers, it’s hard to do because the dancers have to learn how to manage their time outside of the studio.

We’re kind of psychically and mentally drained by the end of the day, so it’s challenging to do our work,” she said.

As for Stone’s anticipated college degree, she has no idea what she wants to major in. For this dancer, becoming a professional ballerina was always her ends to a means, despite the physical pressures her job demands of her.

“Today it felt like a job.” Stone said. “A lot of times it’s not though. A lot of times you’re rehearsing something you really enjoy and then you have more inspiration.”