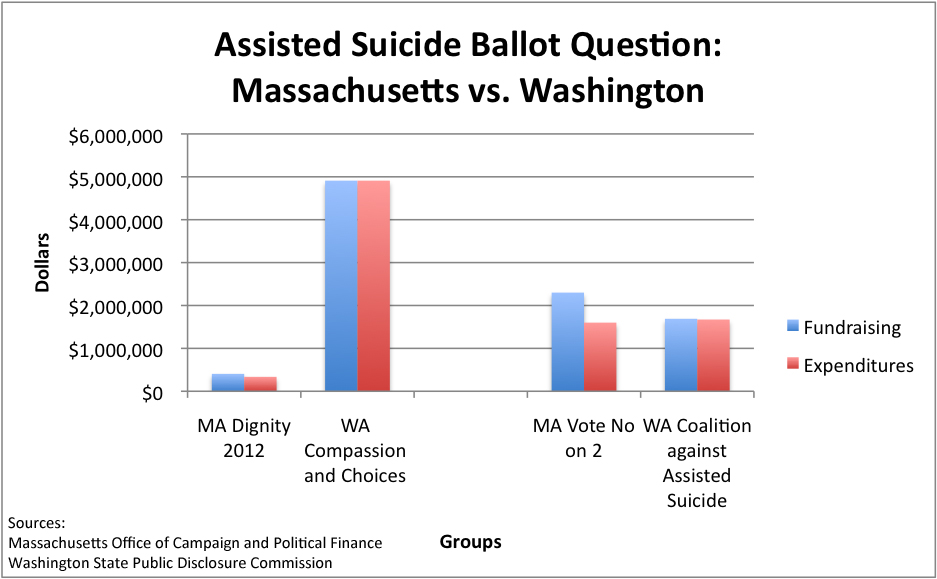 Inundated for months by political ads for the presidential and congressional races, Massachusetts’ voters heard little from the campaigns opposing and supporting controversial ballot questions to legalize medical marijuana and physician-assisted suicide.

That has changed in the last two weeks.

But even as the groups ramp up advertising and public statements, the efforts – and spending – of the campaigns remain much smaller than similar ballot efforts in other states and past ballot issues in Massachusetts:

– The Committee for Compassionate Medicine, which supports the medical marijuana ballot question, raised $545,845 and spent $871,961 as it continues to raise money. The opposing committee, Vote No on Question 3, raised $3,350 and spent $39.80.

– The numbers pale in comparison to some earlier Massachusetts ballot campaigns. In 2006, both sides spent $11 million on a ballot question to permit the sale of beer and wine in supermarkets. That proposition was defeated following a heavy media campaign financed by liquor store owners and supermarket chains.

This year’s ballot issues have seen an acceleration in campaigning and advertising in the last two weeks. Opponents of the assisted suicide question launched their media campaign of eye-catching ads more than a week ago, largely funded by Catholic groups in and out of Massachusetts. Proponents began airing ads this week on a more limited basis.

But the ad campaigns haven’t registered on voters interviewed around Boston last week.

“I haven’t seen any advertising on TV or in print. So when you first asked me, I couldn’t answer because I wasn’t aware of it,” said James Lee of Walpole.

Tobe Berkovitz, a political media consultant and professor of advertising at Boston University, says it’s common for both sides of ballot initiatives to wait until the final weeks to begin advertising.

“You figure a week of decent television is over $350,000 so you do two or three weeks of television and you’re right up around a million dollars,” he said. “You can burn it up really quickly at the end.”

But a look at campaigns for these issues in other states shows campaigning and advertising started sooner, spent more money and maintained higher profiles.

Supporters of the Washington state assisted suicide referendum spent far more, and advertised earlier. By mid-October of the 2008 campaign, the Washington committee had already spent $1.3 million on ads.

Seventeen states have legalized medical marijuana use, 10 through ballot referendum. Spending on those campaigns have ranged from $1.9 million in the 2006 Michigan vote to the $216,000 spent so far for an upcoming vote in Arkansas.

Part of the strategy for the proponents of both Massachusetts ballot questions may lie in the fact that polls last month showed they were comfortably ahead.

Of the two issues, assisted suicide had attracted more money and attention.

Dignity 2012 raised just over $400,000 in the past 10 months, most from outside the state. Key contributors have been the Death with Dignity National Center in Portland, Ore., and the advocacy group Compassion and Choices of Washington state. Washington and Oregon are the only states to have passed assisted suicide laws by referendum.

Proponents of assisted suicide in Massachusetts have not had a strong presence in the political media wars so far, relying mostly on Internet-based campaigning.

According to reports filed with the state’s Office of Campaign and Political Finance, Dignity 2012 spent $5,900 on media production from Fletcher Rowley, Inc in Nashville, Tenn. on Oct. 15.

Fletcher Rowley also produced television ads for the group that supported physician-assisted suicide in Washington State in 2008. A statement for prospective clients on Fletcher Rowley’s website says a last-minute ad they produced for Washington supporters had a big impact on the race:

“One week before Election Day, our polling showed us in the mid-to-high 40’s. We produced a new ad that the campaign manager called a ‘political sledgehammer.’ On Election Day, [the Washington ballot question] was approved by a 19 point margin.”

Dignity 2012 bought six Facebook ads and Google Ad Words in October. It has $76,000 left to spend in the last two weeks before the election.

Two committees that oppose Question 2 will outspend Dignity on media ads and may surpass the level of spending seen in other states in the final weeks.

The group has raised $2 million since January, mostly from Catholic groups across the country. Top donors include St. John’s Seminary in Boston’s Brighton neighborhood, the Catholic Association Inc, in Washington, D.C. and the Knights of Columbus of Hartford, Conn.

“This is a campaign of education. We’re getting the word out,” said spokesman Andy Hoagland.

Less money is being spent on advertisements for Question 3, which would legalize medical marijuana.

The Committee for Compassionate Medicine, which backs the question, has raised just over $545,000. Ninety-one percent of the money came from one person: Peter Lewis, the billionaire CEO of Progressive Insurance who has been bankrolling marijuana legalization efforts across the country.

The group has relied mostly on the Internet and social media, spending $14,000 on Facebook ads, Google Ad words, and You Tube ads.

Jennifer Manley of Dewey Square Group said she would not comment on campaign strategy.

“The OCPF reports speak for themselves,” she said.

There is support for the initiative outside the committee. Mike Crawford, also known as “Mike Cann,” former president of MassCann/NORML, a non-profit organization looking to reform marijuana laws, said he has posted pro-videos on his YouTube account.

He said he expects to see more visible advertising in the final days of the campaign, similar to the surge seen in the 2008 vote to decriminalize small amounts of marijuana.

“That’s really what we saw last time, the last two or three weeks, they really hit the airwaves,” he said.

The group spending the least amount of money is Vote No on Question 3, which opposes medical marijuana. The committee has raised $3,350 since July. Its biggest donors are the Massachusetts Major Cities Police Association and the Middlesex Chiefs of Police.

The only expenditure this committee recorded with the Office of Campaign and Political Finance is $39.80 to PayPal in September.

“We just don’t have a million dollars to do this through glitzy advertising,” said Josephine Hensey, a Westborough homemaker who runs the committee. “We’ve had a lot of media interest so we’ve been able to talk to print media and TV media, so we’re getting the word out that way,” she said.

But despite the final efforts, the message may not be getting through.

“I haven’t seen them at all,” said Brendan Maier, a Cambridge personal trainer, said of the political events and advertising. “It’s what, twelve days away now and I had no idea.”