Volunteers find a cold-stunned Kemp’s Ridley sea turtle stranded on a beach in Cape Cod on a cold Saturday in November. Click here for the full story. 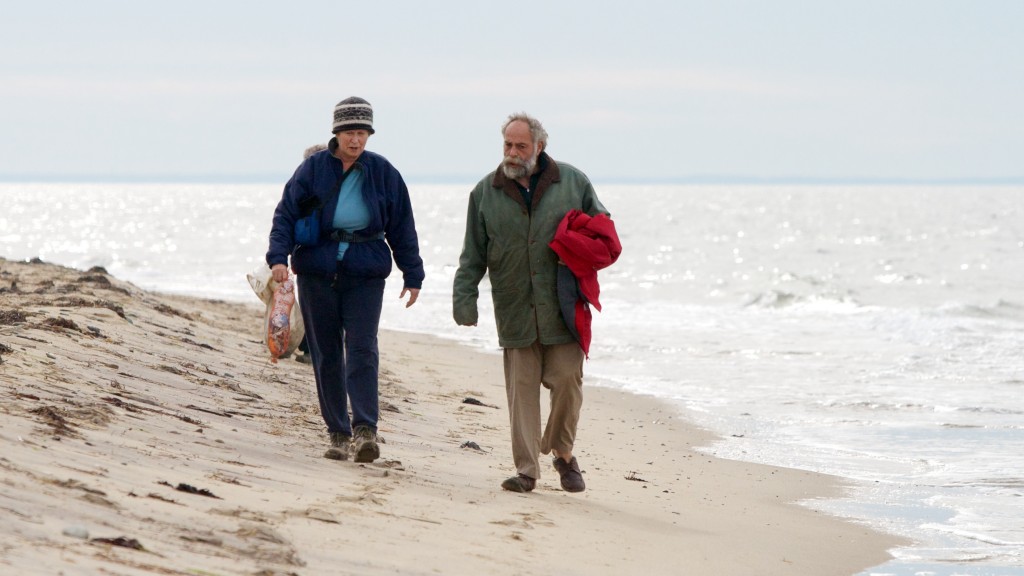 Dennis Murley, pictured at right, walks with a volunteer on a beach in Wellfleet in Cape Cod. Murley works through the Massachusetts Audubon Society to coordinate volunteers to search for stranded sea turtles. Last year, Audubon recovered 400 such turtles on the beach and about 200 made it to the Aquarium for rehab. Photo by Poncie Rutsch. 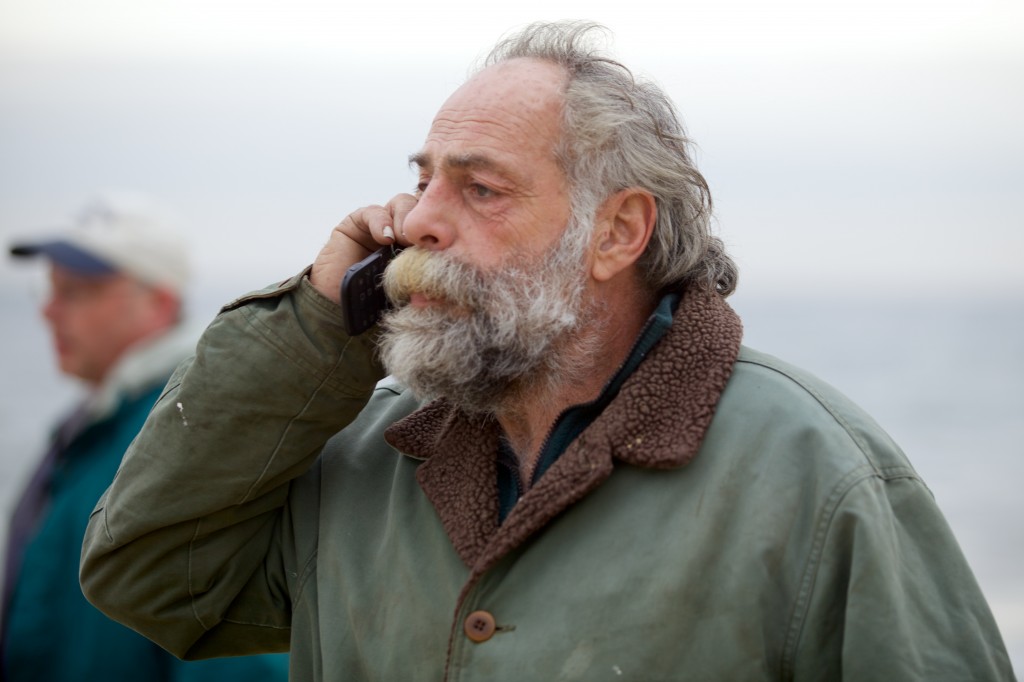 Dennis Murley answers the phone to learn that volunteers have found a sea turtle stranded on the beach a few miles south of him. According to Murley, one day, he received seven calls from volunteers who found turtles on the beach in fifteen minutes. Photo by XiaoZhi Lim. 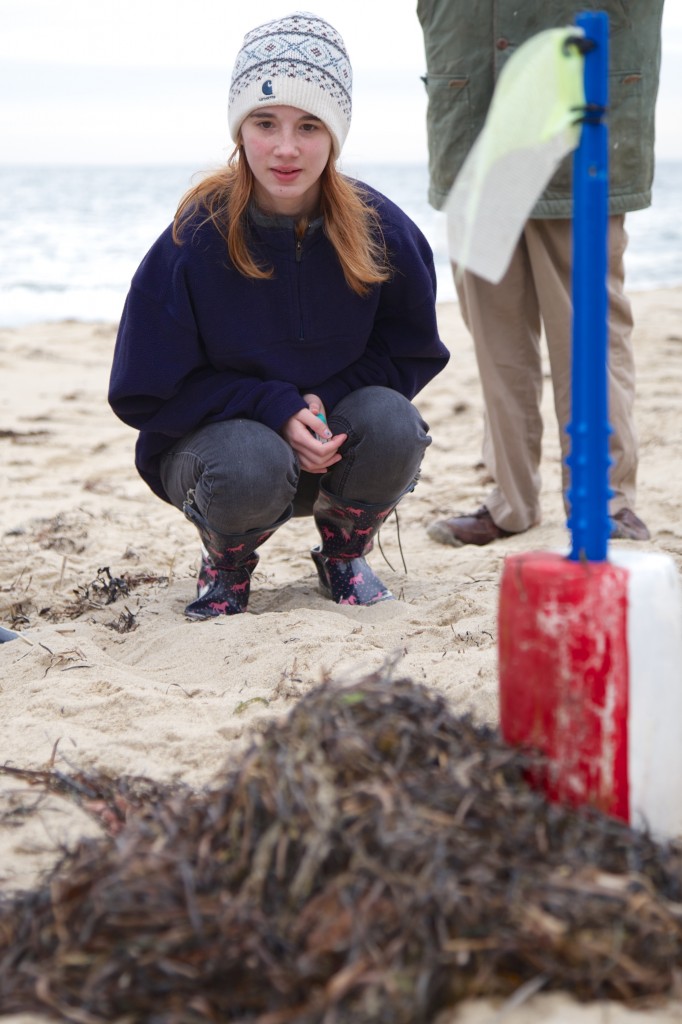 Volunteer Kayla Phelps squats to get a better look at a cold-stunned sea turtle, which volunteers have moved farther up the beach and covered with seaweed. Phelps is a college student in marine biology and aspires to study sea turtles in Florida. Photo by XiaoZhi Lim.

A cold-stunned sea turtle, nicknamed Alfalfa by the people who found it, lies covered with seaweed to prevent the cold wind from reaching it. Photo by XiaoZhi Lim.

Dennis Murley uncovers Alfalfa, a Kemp’s Ridley sea turtle, to identify it and check for signs of life as other volunteers on the beach look on. Photo by XiaoZhi Lim. 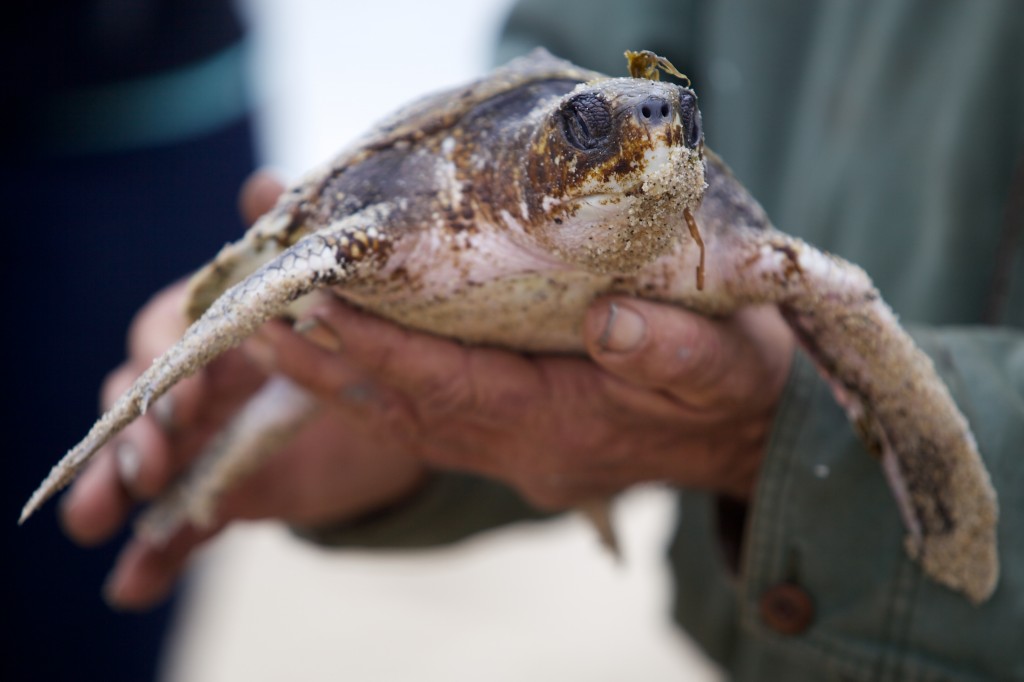 Alfalfa the sea turtle looks out from Dennis Murley’s hands. Murley estimates that Alfalfa has a ninety plus percent chance of survival. Photo by XiaoZhi Lim. 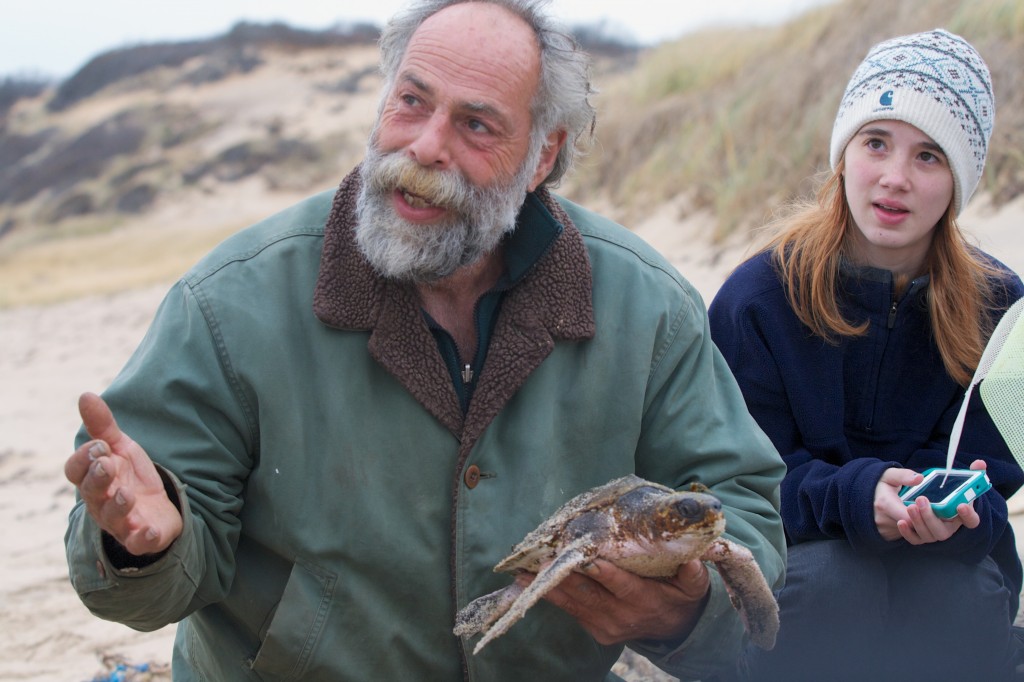 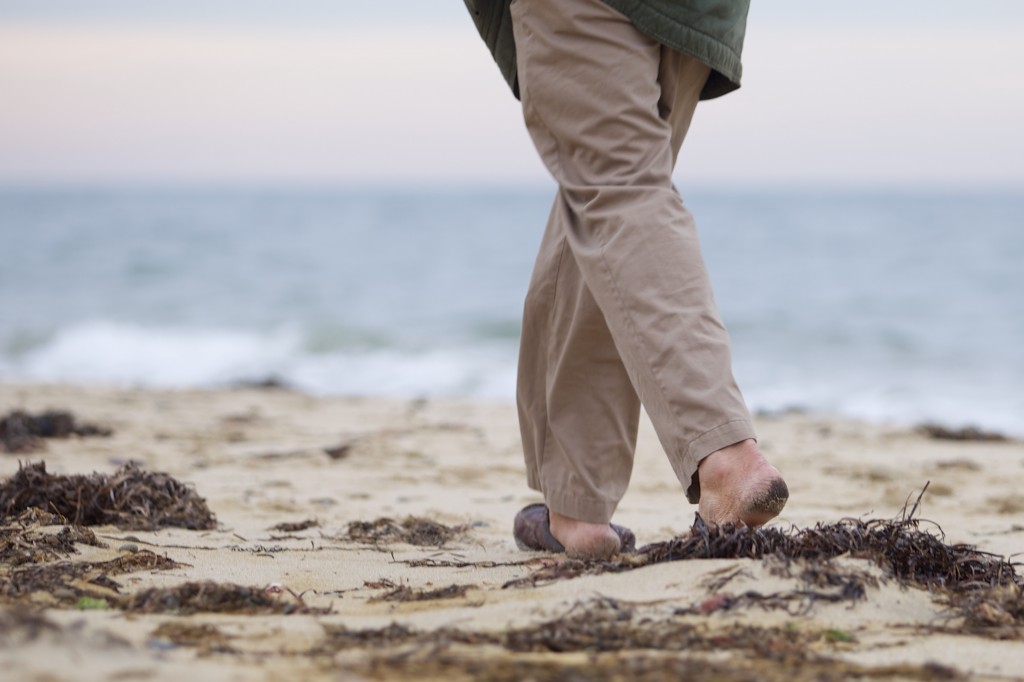 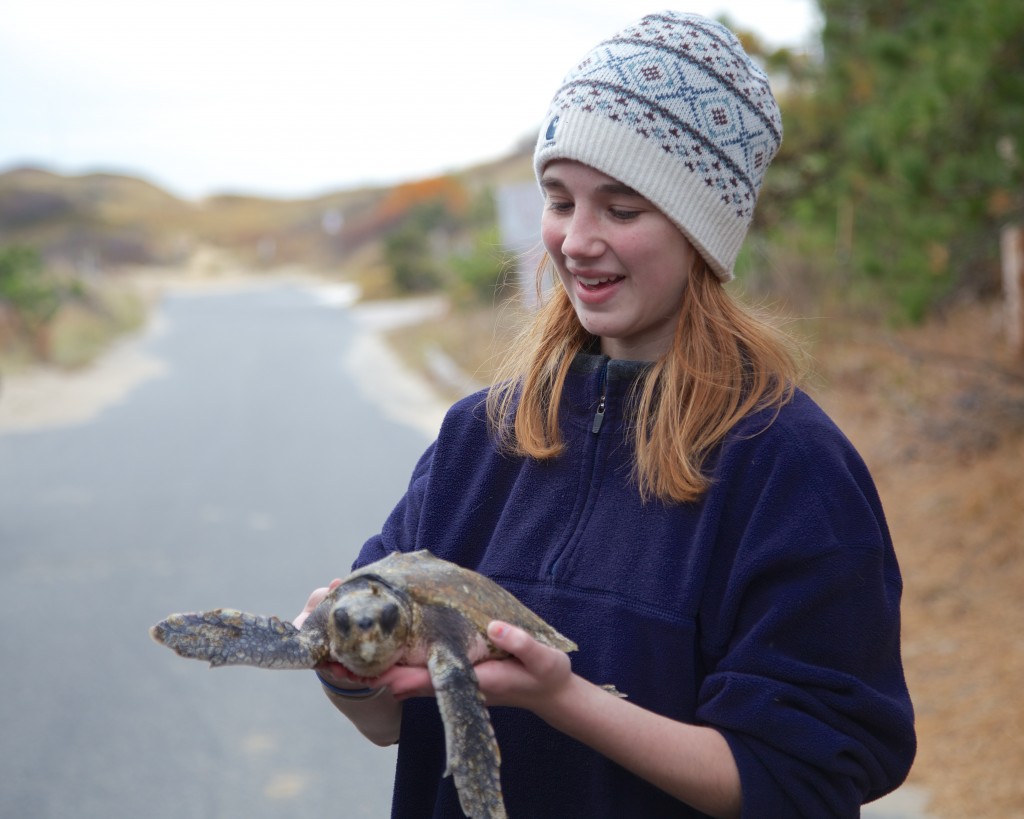 Volunteer Kayla Phelps carries the Kemp’s Ridley sea turtle back to the Mass Audubon headquarters in Wellfleet, where the turtle will receive some immediate care before heading to a turtle medicine facility in Quincy. Photo by XiaoZhi Lim. 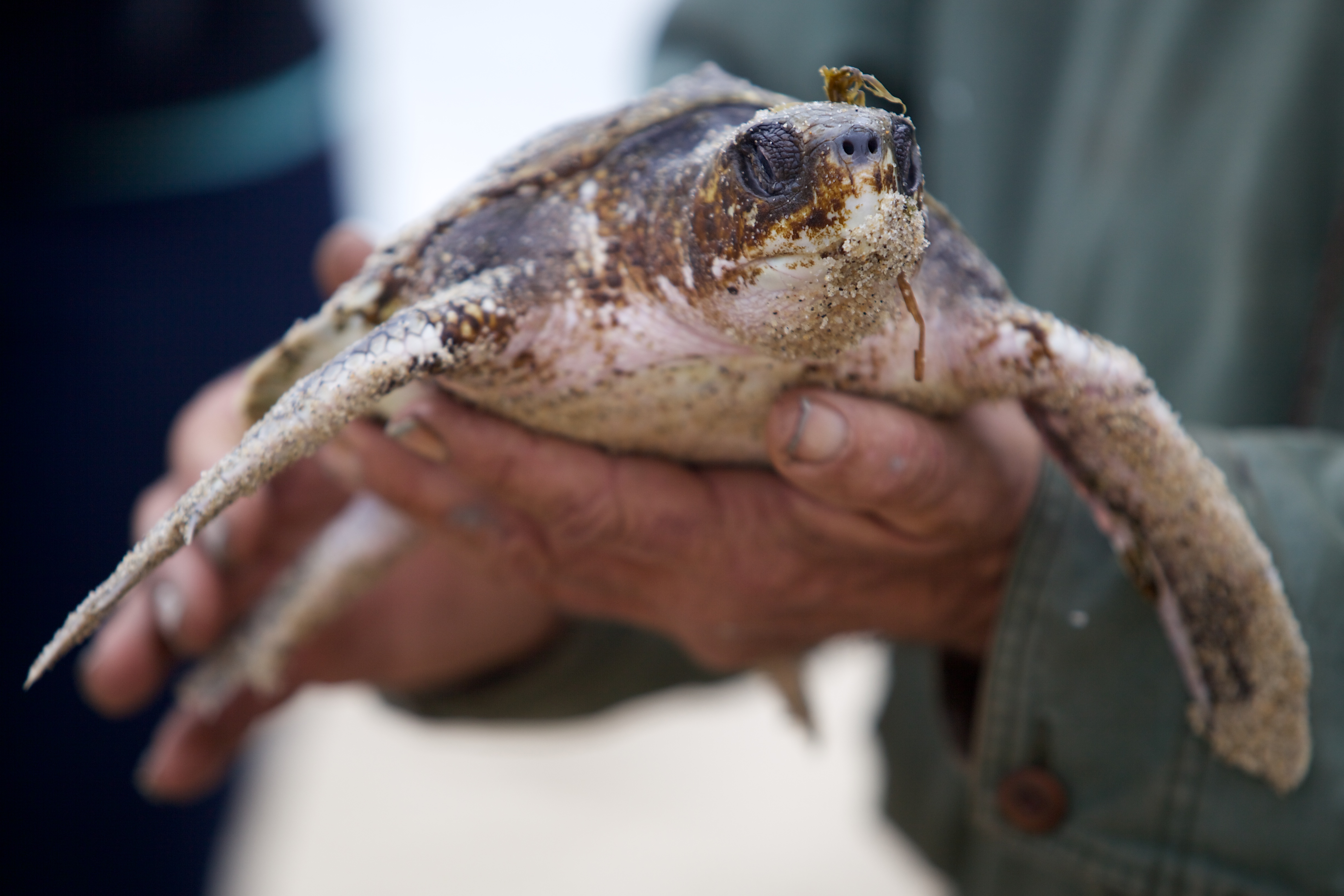 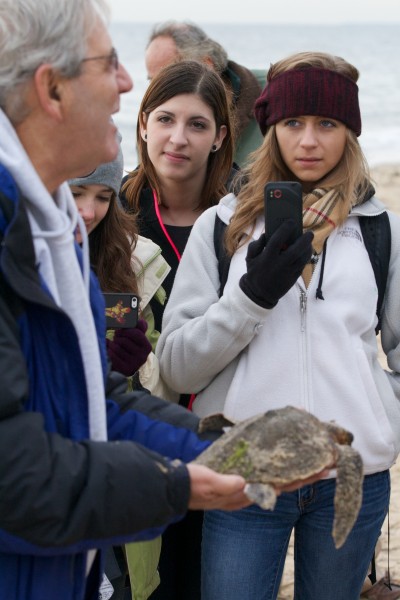