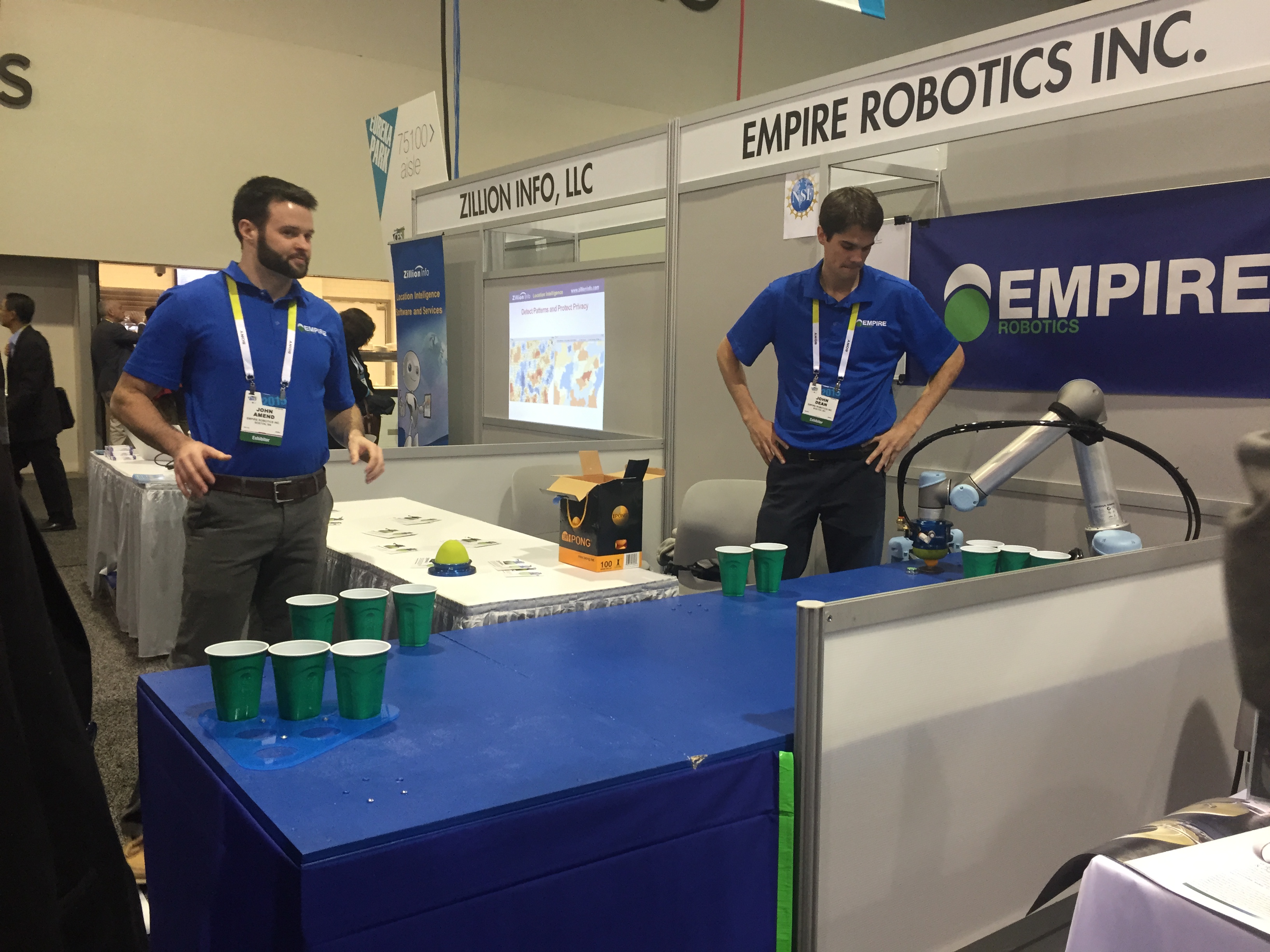 Las Vegas— CES officially opened today in Las Vegas with thousands of exhibitors showing off new products and technologies in innovative – and interactive – ways. So interactive, in fact, that one robot is challenging innocent passersby to a game of beer pong; and beating them nearly every time.

Of course, the point of this robot isn’t just be a good college roommate, but instead to highlight the “soft” robotics technology being developed at Empire Robotics, Inc. The Boston-based company uses this technology to create a ‘bot that can better pick up objects, the Empire co-founder and CTO John Amend said.

The “hand” of the robot is actually a half-sphere shaped ball that is filled with what feels like grains of sand. As in the case of the ping pong ball at CES, the “hand” is able to mold around the ball and use an inner vacuum to suck out air between the grainy material in order to maintain a firm grip, before it’s able to aim and shoot the ping pong ball across the table at a cup. This soft technology makes it possible for the robot to pick up virtually anything it wants because it can mold to the object’s specific shape before lifting.

As for releasing and shooting the ball, this robot is pretty accurate, too. The arm is pre-calibrated to shoot at the center cup 10 times in order to lock down the cup’s location, then slight adjustments are made from there to aim at any surrounding cups. So if you weren’t already impressed, that means that the robot aims at specific cups before shooting, rather than just releasing the ball wherever it can.

The technology can be used commercially in manufacturing, cutting down on tool change time and time of overall production. While it’s in Vegas, however, the robot has seemed to have found its use in the party scene. 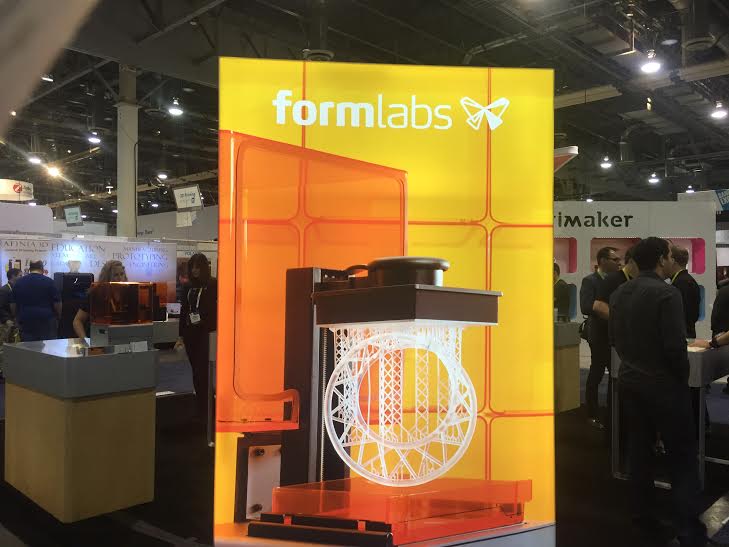 Las Vegas— Somerville-based 3D printing company Formlabs has continuously been at the forefront of the 3D printing trend, and here at CES that’s been no different. The company today announced an update in its software that will help to 3D print objects faster on its Form1+ printer than ever before.

Now, Formlabs announced, its Form1+ printer will work in what’s called “Draft Mode;” printing in 200 microns and using up to 60 percent fewer materials in print supports. While this results in a slightly reduced quality of the product, it also means faster printing and better functionality, which is helpful in rapid prototyping. Draft Mode can now shave minutes off of the printing of certain objects compared to other commercial 3D printers.

Formlabs got its start as a Kickstarter success story in 2012 with its first generation printer the Form1. The Form1+, which rolled out last summer, is the latest printer developed by the company that makes easy and professional 3D printing available for any user, with some new improvements over its previous model. The printer is renowned for its precision laser capabilities and use of liquid resin to build the object it’s printing, rather than melting plastic and waiting for it to harden like many other printers. 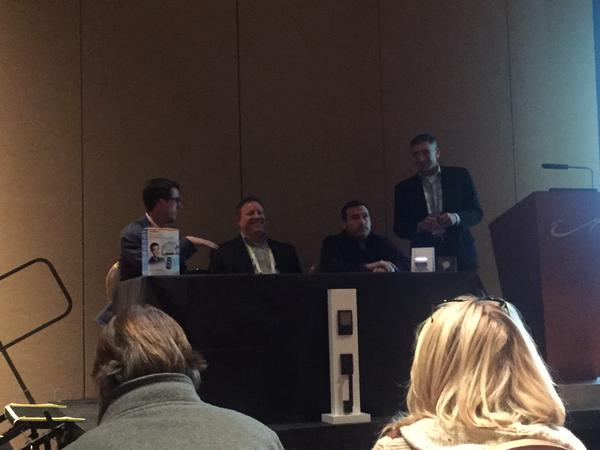 Las Vegas— Smart home gadgets have dominated the International CES scene so far, signaling a trend that will keep going for 2015. From controlling the temperature of your home to having the ability to turn on and off lights and appliances remotely from your smart phone, everything is starting to be connected wirelessly.

Apple has been at the forefront of this technology, announcing HomeKit, the Cupertino company’s mobile platform for smart homes announced last summer at its World Wide Developer’s Conference, but the tech giant has been noticeably absent on the follow through of these devices. Very little has been revealed about how or when the technology will be made publicly available, but we may have just received more clues at CES.

With HomeKit, Apple won’t be the one making devices to control your home, but rather supplying the support and framework for other vendors to create these products more easily. Such as with iDevices, those products will be housed in one place, and one app, all on your mobile device.

While the tech giant is not present at the event, iDevices, Schlage and Chamberlain are three companies that announced HomeKit compatible devices that will be available later in the year.

iDevices Switch, which will launch in Q2, is a fully functional device that plugs into any light socket in an individual’s home, allowing the owner to access controls over the functions in their home. From turning on the lights to locking doors, Switch talks to your home network via WiFi to control what you want and when. Home owners will also be able to put devices on a timer in order to turn on and off automatically.

Lock maker Schlage will also offer a HomeKit-compatible lock for home doors, which will incorporate both Bluetooth and WiFi in order to connect to the user’s iPhone and save power, which will be available later this year.

The last big HomeKit device will be available through Chamberlain garage door openers, which will allow a homeowner to remotely open and close their garage door from their phone as well as track when the door is opened and closed; great for parents of teens who don’t come home on time for curfew. 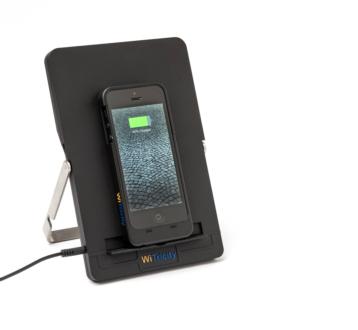 Las Vegas — Sunday marked the beginning of a week-long preview of the biggest and most innovative gadgets and trends that will dominate the 2015 consumer tech industry. While International CES annually takes place out West, that doesn’t mean East Coasters aren’t well represented at the show, especially companies that got their start in Boston.

More than  50 companies who call the Hub home will be showcasing their products throughout this week, and we’ve highlighted five that are poised to steal the show. Here’s a closer look of what you can expect out of Boston at CES 15.

A featured exhibitor this year, WiTricity is focusing on wireless charging. The company is giving a behind-the-scenes look at the commercial future of its technology by demoing a Rezence-ready wireless charging hotspot where attendees can power up their devices, Rezence-enabled consumer and automotive demonstrations, and a glimpse at the “Home of the Future.” The Watertown-based company is the only one from Massachusetts to be chosen as a featured exhibitor, and could dominate wireless talk at the convention.

While Apple Pay may have stolen the show this year as the mobile wallet go-to, LoopPay is poised to be a strong competitor. Aiming to replace all your physical credit and debit cards with easy mobile payments stored on your phone, LoopPay is currently accepted at more than 10,000 locations across the US. And unlike Apple Pay, the system is compatible with older iPhone models as well as some Android devices and is offered in the form of a phone case, FOB key chain and LoopPay Card. The company is based out of Burlington, Mass.

Empire Robotics, Inc, which got its start at Cornell before moving to Boston in 2013, is a robotics company that specializes in “flexible robotic end-effectors that leverage the jamming phase transition of granular materials.” In plain English, visualize a robotic arm with a squishy grip attached to the end that molds to the shape of an object making it easy to pick it up. The team of self-dubbed “soft robotics experts,” materials scientists and automation engineers from Empire have come to CES to show off what their technology can do for the field; and they’re doing it in the most fun way possible. Empire has brought along a robot that will challenge CES attendees to a game of beer pong, which will show the ability of the ‘bot to grasp the ping pong balls and launch them towards their target.

The 3D printing design and manufacturing company out of Somerville will focus on its Form 1+ printer here at CES. The printer is an all-inclusive, easy-to-use 3D printer that anyone can buy (for a cool $3,299, that is). Using new materials such as Castable, a liquid resin that allows for little friction and more precise printing of pieces, Formlabs and its devices will be in the mix of trendy 3D printing companies at the show.

Following the huge trend of 2014 and leading into 2015, ecovent is focused on smart homes. By adding sleek, unassuming vents around your home, the company helps you manually spot heat and cool those individual areas by controlling the temperatures via your smart phone. By adding an ecovent to places where there isn’t an existing vent built into your home, you can pinpoint specific areas that need more temperature control than others, like a nursery, for example. The devices can also help save money by eliminating the need to heat empty spaces, like a college student’s empty room while they’re away at school.

For a full list of Massachusetts exhibitors, head here.