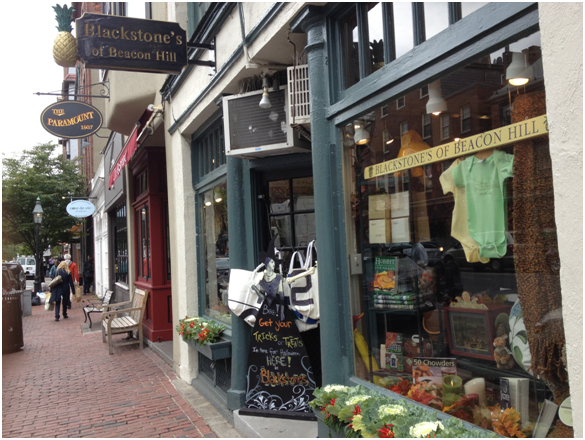 BEACON HILL — With its eclectic mixture of old, family run businesses and up-and-coming boutique stores, Charles Street is seeing steady retail growth even in what most hope is the tail end of a tough economy.

Crush, an upscale women’s fashion store here, is thriving and expanded to Newbury Street with a second store last February.

Laura Macris, co-owner of Crush, said the retailer did not experience a big downturn in sales during the recession since it had only opened the first store in 2007. But the firm’s success is the result of careful business planning, too.

“We also restructured how we bought [our products],” said Rebecca Penner, fellow co-owner along with Macris. “We brought in some lower price lines so people would still shop here and be able to get goods at a lower price so we didn’t lose customers. That was very helpful and we have a very loyal clientele here in Beacon Hill. They continued to shop because they were already a fan of the store.”

Customer loyalty is also a major component of Dan Greenfield’s business. The owner of Gary Drug Co., an independent pharmacy, Greenfield said the store’s following protected the business from the recession.

“We have customers that have been with us for 30-plus years. Their kids are growing up and they have kids but they’re still coming to us,” said Greenfield.

Built in 1934, Greenfield’s father bought Gary Drug Co. in 1972. The family has been in the drug store business ever since, serving the residents of Beacon Hill and nearby Back Bay. Although there has been no huge dip in his business during the recession, Greenfield did see a noticeable lack of tourists and walk-in customers.

Greenfield said another shield his business has against  the recession is the fact that it sells essential items,  such as prescriptions and medicine. In addition, Greenfield’s family owns the building that houses the store so he does not have to notoriously high rent like many of his Beacon Hill neighbors.

“If we had to pay rent, we probably wouldn’t be here,” Greenfield said.

Jim Klocke, executive vice president of the Greater Boston Chamber of Commerce, said that Beacon Hill got through the economic recession so well because it is a generally affluent neighborhood with people who are willing to spend money at the stores there.

“The other related reason is the high educational attainment of the residents, which results in their having higher-paying jobs and more job opportunities,” Klocke said in an email.

However, not all stores on Charles Street share in these successes. Blackstone’s of Beacon Hill, a gift shop that recently won the Gifts & Decorative Accessories Magazine Award for efforts to raise money for pediatric cancer research, is still feeling the reverberations from the 2008 recession.

Jennifer Hill, a co-owner of the store, took over Blackstone’s in 2006. Hill said that financially the store was hard hit in 2008 and she had to find ways to cut back on expenses.

“It meant many changes,” Hill said. “It meant we had to cut back on staff, which of course has ramifications in the economy. You’re not hiring and that adds to the unemployment. We couldn’t hire seasonal help to the extent that we had in the previous years.”

As for business today, Hill said this year has been better but she knows sales may not bounce back to levels when she first took over the business. She credited the business’ early sales boom to customers’ accessibility to easy credit.

“[Before], for good or for bad, the consumers spent in some ways uncontrolled. Back in 2006, those were feel good days and credit was easy to get. The average wallet opened up and a credit card was matched by 10 [other credit cards],” Hill said.

Still, Hill said she is optimistic for the future of her business and has faith in her customers: “I think people are feeling a bit more confident. They’ve gotten used to what their spending budget is, and I think they’re learning to live within it.”