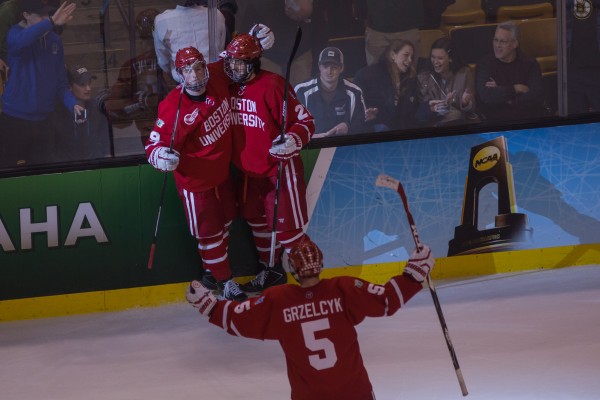 Terriers fans got a little more excitement than they bargained for, but they nonetheless got to witness the Boston University men’s hockey team defeat the University of North Dakota 5-3 in the Frozen Four semifinal on Thursday night at TD Garden. BU will take on Providence College in an all-Hockey East tilt in the National Championship game on Saturday.

Providence College defeated Nebraska Omaha, 4-1, in the first semifinal on Thursday. The Terriers will play for their sixth national title, having last won it in 2009.

Four different goal scorer got in the act for the Terriers, including Jack Eichel, who tallied three points.

Eichel opened the scoring with his 25th goal of the season and potted a crucial empty netter in the final seconds of the third period. He additionally assisted on freshman A.J. Greer’s second period marker. Senior Cason Hohmann recorded two assists while freshman Brien Diffley also posted a pair of helpers. Sophomore Doyle Somerby scored his first goal of the season. Ten Terriers scored at least one point tonight.

It was a wild finish, as North Dakota almost erased a three-goal third-period deficit. UND outshot BU 14-7 in the third period and 39-28 for the game, but the Terriers remained resilient and Eichel sealed the deal with a long-range empty-net goal.

The Terriers controlled play in the early going and held a 7-2 lead in shots through the first 13 minutes. They were able to get their first marker five minutes into the game. Junior Ahti Oksanen set a screen in front of UND goalie Zane McIntyre as a shot came from the point. The puck then bounced to Eichel, who deposited the rebound into the open net.

Play started to shift toward the BU end of the ice for the rest of the game. However, and O’Connor was called upon to make plenty of key saves to keep the Terriers on top.

Freshman Brandon Hickey drew a boarding call late in the opening frame and took advantage on the ensuing power play. Hohmann dished the puck back to Hickey at the left point, who blasted the shot through McIntyre’s legs for his sixth goal of the season.

UND had a power play to start the second period and capitalized when Luke Johnson rifled a snap shot just under the crossbar to cut the deficit to 2-1.

Moments later, Greer regained the two-goal advantage for the Terriers at the 11:20 mark of the second stanza. Eichel slid a perfect pass for Greer, who stepped into it in stride and one-timed the puck past McIntyre for his third goal of the season.

Somerby made it 4-1 with 6:50 to play in the middle period. He got the puck along the left half-wall and sent a bad-angle shot towards the goal. The puck found its way through two Terriers in front of McIntyre and into the back of the net.

UND nearly mounted a comeback in the third period, beginning with a rare gaffe by O’Connor. He misjudged a dump-in and allowed Troy Stecher to put the puck in the open net for a shorthanded goal at the 7:50 mark. Connor Gaarder then scored on a power play to cut the BU lead to 4-3. After senior Evan Rodrigues and Stephan Pattyn received matching minors with 1:33 to play, UND pulled McIntyre in favor of an extra attacker. It did not come to fruition for them, as Eichel got the puck just inside his own blue line and calmly sent it the length of the ice into the empty net.