Microfilm Gets Micro Use 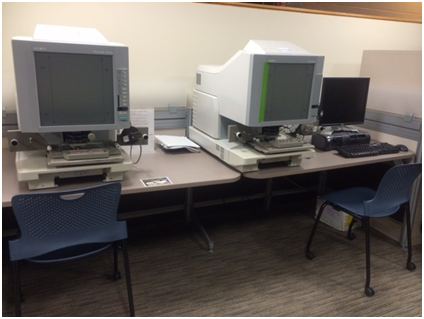 As patrons emerged from the dim staircase leading to the basement room of Boston University’s Mugar Memorial Library, fluorescent lights bright enough to dilate their eyes greeted them. They headed toward the back wall’s Krasker Film Library, where they could view anything from Billy Budd on VHS to The Great Gatsby on Blu-ray. Not one patron bothered to glance at the stacks of black cabinets that reached the ceiling or the machine the size of one of the first computers known to man–the microform viewer.

“Students waited in line to use the machines. Now, mostly PhD students use them when they need an obscure journal or archived material,” said Roland Rodene, the supervisor for the Microform and Current Periodicals department since 1996.

This traditional research method, used by generations of students and researchers,was invented by John Benjamin Dancer in 1839 to preserve microphotographs. In the early 1850s,John Glaisher suggested using the same technique to preserve documents. Microform was commercialized in the 1920s as along-lasting, compact and an inexpensive alternative to the codex format that was easily damaged and yellowed with age.

However, what were once advantages of this research device are now seen as time- consuming inconveniences because of advances in technology. Most journals, magazines and newspapers have moved online and have digitized their archives. For some universities, this digitization has caused their libraries’ microform departments to become archaic.

A sheet of sticky yellow dust covered the machine that was once the color of stone. The machine had the appearance of an oversized microscope with a screen instead of an eyepiece. It had two wheels to insert and navigate through microfilm, a stage that emits light and was hooked up to a computer monitor that bore the words, “Computer for scanning only!” Between the machine and the monitor was a sign with instructions on how to scan microform.

“Microform is a dying research tool. Many organizations that have microfilm are digitizing them and making their contents accessible on web-based interfaces,” said Anthony Cocciolo, an assistant professor at the Pratt Institute School of Information and Library Science in New York City. Cocciolo has researched the uses of emerging information and communications technology and the interplay between digital and physical spaces.

“We used to be really busy before the World Wide Web. People used to do a lot of research down here, especially during finals. We had at least 12 machines and now we have three. People were always waiting to use them back then because you had to look through several reels of film to find the article you needed,” said David Perkins, the night staff for the Microform and Current Periodicals department.

“The major problem is access. Young people find it very foreign, and have no interest in using something so slow and cumbersome,” said Cocciolo.

To use the microform viewer, patrons turned on the machine, inserted the film into the first wheel, guided the film under the glass covering the stage and into the second wheel and then turned the wheel to make sure the film can was entered correctly. Patrons used the buttons in front of the stage to move through the film.

About a decade ago, patrons could only print the images they needed at a rate of five cents per page. But within the past decade, the department has tried to connect with the digital age by adding a scanning function, which allowed patrons to scan and save their files digitally, reducing the cost of this research method while encouraging sustainability.

“We got the scanner in 2006 and it was supposed to be temporary, but we kept it because it was much more popular than the paper method,” Perkins said.

“We have seen a decrease in subscriptions because everything is online. We probably only have 100 subscriptions left. Microfilm is very expensive—one roll costs about $100 with a subscription. But one microfiche only costs a fraction of a penny with the subscription,” said Perkins.

Most students no longer had to visit the library to research their papers and the foreign aspect of this research method has become common.

“I’ve never heard of microform. I use online databases to do research for my papers or I go straight to the journal’s website if I know what article I want,” said Dharati Joshi, who studies math and chemistry at Boston University.

Joshi is not the only one who has never used microform before.

“If I could find the same kind of information online then I wouldn’t use microform because the big machine is kind of scary and seems like a hassle to use. But if I were required to use it, then I’d make one of the students at the desk help me,” said NehaNarula, a psychology major at Boston University.

But Mugar isn’t the only university library that has cut workers from its microform library.

“Until about two years ago, a Current Periodicals and Microfilm desk was staffed to assist users with those collections. That desk is no longer staffed, presumably due to decreased use of the microfilm collection,” said Thomas Souers, the stack coordinator of Tufts University’s Tisch Library.

The drop in use of the Microform and Current Periodicals department at Mugarwas accompanied by a reductioon in space.

In the last two years, the Microform and Current Periodicals section has become unrecognizable. The microform viewing room now shares its space with the Krasker Film library and the Current Periodicals section, located across the hall from the Microform and Krasker Film Library and home to the collection of microfiche, currently contains no periodicals because the room has been rationed as an extension of the Law Library.
The department has seen some unconventional usage.

Two years ago, before the Microfilm room shared its space with the Krasker Film Library, the department valued dim lighting because it was ideal for viewing microform. Now the Current Periodicals room is the only place with dim lights—the ideal setting for naps in between classes.

However, Cocciolo states that there is still some interest in microform as a preservation medium because digital preservation has not proven itself as stable as microfilm.

“Microform is estimated to have a life of at least 500 years. It is also technology independent: all you need is a light and a magnifying glass. So it isn’t unheard of these days to output select digitized content to microfilm for long-term preservation,” said Cocciolo.

While some university libraries have seen a fall in the use of microfrom, others have shown an interest in keeping microform around despite the move toward online research.

“Use in the two years that I have been at Newcomb has increased.Our library recently invested in ProScan2000 microform readers because researchers come to our library specifically to view our unique microform collection. I believe this is because our collection is vast and contains rare items which are now easier for the public and our consortium libraries to find. But this increasemay also be due to our new sophisticated equipment,” said Carrie Blabac-Myers, the assistant head of Reader Services in Newcomb at the State University of New York at Binghamton’s Bartle Library.

But Binghamton is not the only public university that is optimistic about the future of microform.

“We continue our microform subscriptions to many domestic and international newspapers that are also available in databases provided by the library because microform provides additional information not found in the database. And our subject selectors continue to review and purchase research material that is only found in microform,” said Marcia Bailey, the head of the Serials and Microforms department at the University Library at the University of Michigan.

Not all microform departments have had a dwindling staff like the ones at private universities like Boston University.

“Staffing and hourly student budget for the Serials and microforms department has remained relatively constant over the ten years I have worked in the department,” said Bailey.
But public university libraries are not the only ones who are optimistic about the future of microform.

“We started to see a decrease in the purchase of microform in the mid to late 90s, but we still have bulk business in case our computers blow up,” said Rhoda Zink, who has worked for 30 years at ProQuest, the largest distributer of microform in the country. “There will always be a need for an archive.”