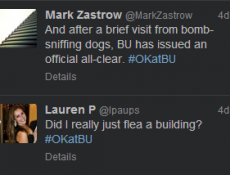 Boston University student Erica Leblang was catching up on homework at her parent’s house in Wayland when she saw a TV news story about bombs going off near the Boston Marathon finish line. Wanting to confirm the safety of friends and a coworker, she turned to Twitter and created the hashtag #OKatBU.

Her idea caught on: more than 200 people used #OKatBU to confirm their safety when there was little or no cell phone service. In the following days, at least 150 more tweets containing the hashtag went out on Twitter when the manhunt for one of the bombing suspects led to lockdowns at BU and surrounding areas where many students lived.

Official accounts from BU, including the Howard Thurman Center and the university’s student activities office, started sending tweets with the hashtag and telling others to use it. BU news outlets, such as The Daily Free Press and WTBU news, also urged people to use the hashtag, and USA Today College even joined the trend.

“I was thinking that I might see people who I work with pop up on the feed and I’d just know that one more person was safe,” said Leblang, a senior at BU. “I had the #OKatBU feed up and saw how many people were using it. It wasn’t just students saying that they were okay, but alums wishing everyone well and people just sharing information.”

To help to get the word out about the new hashtag, Leblang sent a tweet about her idea to @BUDogPound, which has 1,270 followers who are mostly BU students. One of the account administrators, David Bartlett, saw her tweet and immediately spread the news.

“Cell service was down and none of us could reach our parents, let alone our two missing friends,” said Bartlett, a junior at BU. He was watching the race at the 25-mile mark and two of his friends running the marathon had just passed him when the bombs exploded. “I got a notification for the tweet, read it, and realized that Twitter could facilitate the communication we all were lacking.”

Bartlett said he had no idea that the hashtag would take off when he first told people to tweet #OKatBU, but he understood why.

“People just wanted to find out if their friends were OK and also let their followers know that they were safe,” he said.