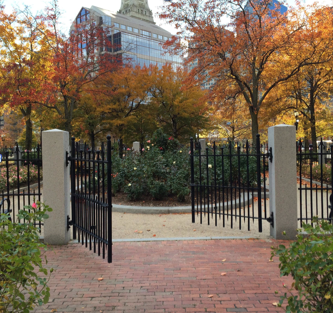 BOSTON — On a cool, crisp November day, Denise Labardi sat on a park bench admiring a small garden enclosed by a large cast iron gate. Orange and yellow leaves littered the ground and swirled as the wind blew. The garden was full of pink roses, some dying as winter was approaching. “It is so cold, but still very pretty,” said Labardi.

Labardi,who  was visiting from St. Louis,  stopped by the Rose Kennedy Garden on her travels along the Freedom Trail in the North End. In 1987, the garden was planted to honor Rose Fitzgerald Kennedy, the mother of President John F. Kennedy whose life was lost 50 years ago. The garden, a small section of the Christopher Columbus Waterfront Park, contains 104 rose bushes  – one for every year she lived. She died in 1995 at age 104.

“My mom was a huge Kennedy fan. I was only two when he died, so I don’t know much about him or Rose Kennedy. I only know about him from my mother,” said Labardi. During a tour of Boston, a guide mentioned this historic site, which convinced Labardi to visit during her stay. Not knowing much about Rose Kennedy, Labardi read the two mounted, bronze plaques at the entrance of the park.

“With this garden the people of Boston honor all gold star mothers,” was written on one plaque. Rose Kennedy was named a gold star mother in 1944 when her son Joseph Patrick Kennedy Jr. was killed in World War II. Two more of her nine children also lost their lives serving their country: President John F. Kennedy and Senator Robert F. Kennedy were assassinated while in office.

Rose Kennedy was born not far away from her garden, at 4 Garden Court in the North End. As daughter of  Boston Mayor John Francis Fitzgerald, and wife of U.S. Ambassador to Great Britain, Joseph P. Kennedy, her life blossomed in the world of politics. “The garden is dedicated to a woman of faith and courage,” one of the plaques reads.