Chefs and Fish Distributors Use More ‘Trash Fish’ for Sustainability 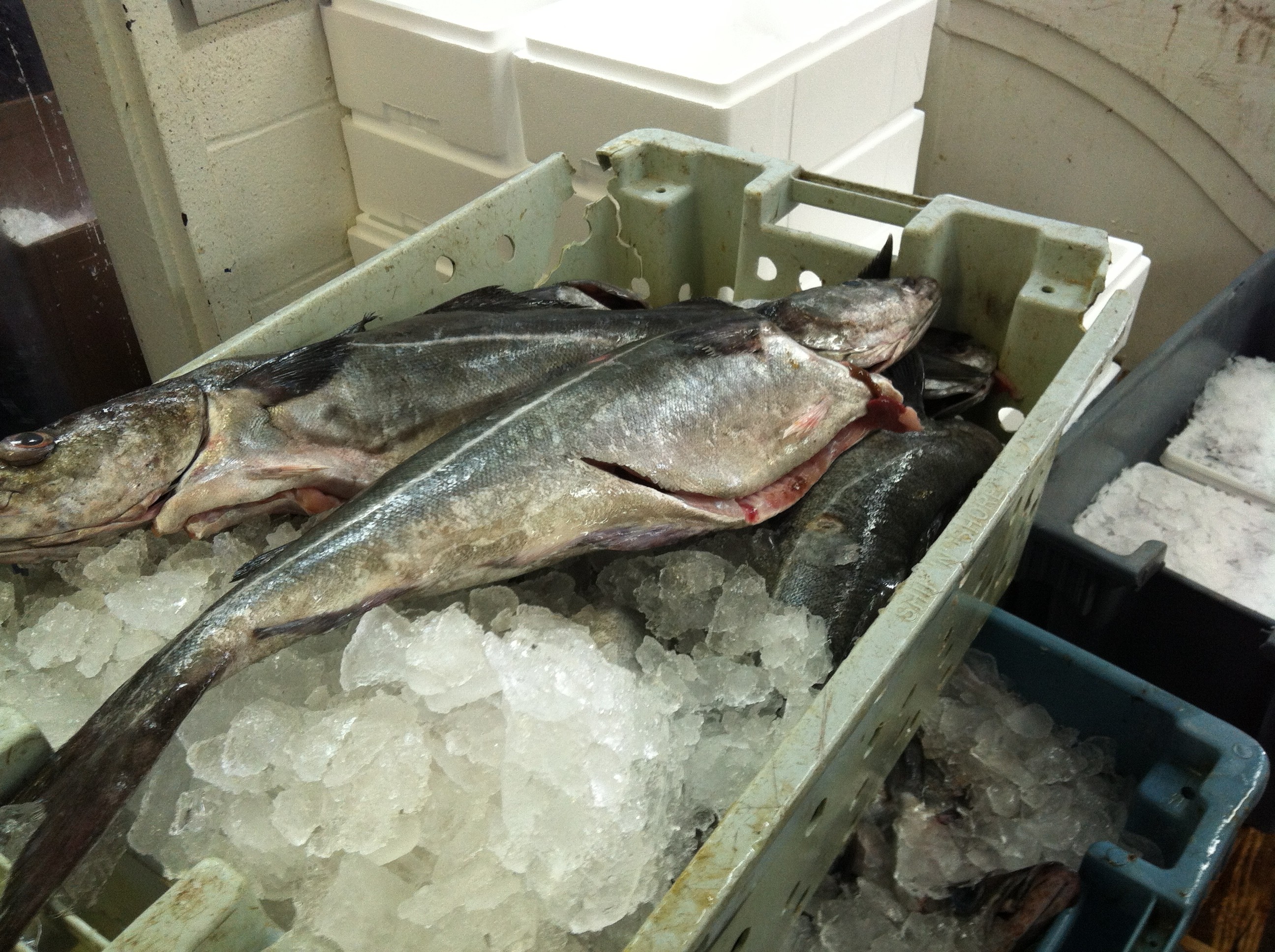 A man in a waterproof orange slicker suit grabs gleaming freshly processed cod from a white container lined with ice and heaves the fish on and off an industrial scale, weighing them for market.

Auerbach, 33, with bright blue eyes and thick brown hair pushed into a Boston Red Sox hat, surveys the room before splashing across the wet concrete floor to an open door that offers a view of the shimmering inky-blue harbor. The water ripples gently in the wind and jostles a few docked fishing boats. Two expectant herring gulls perch on the wooden pier with tilted heads, each balancing on one yellow-webbed foot.

“It’s too warm for this today,” he explains, shutting the door with a clang. “Have to keep it cold in here.”

The men barely glance up as Auerbach inspects the heart of his operation. It’s 11 a.m. and his men are deeply focused on the midday process of packing the seafood to be picked up by trucks later in the afternoon and driven to Logan airport. From there, the produce of New England fishermen who work with Red’s Best will be flown to wholesale markets all over the world.

Methodically, another orange slicker-clad worker bends down, reaches into a white container brimming with ice, picks up a clam and tosses it down a metal chute. The bivalves land in cardboard boxes marked with varying destination points in black sharpie—some are as nearby as restaurants in New England; some say “Hong Kong.”

Hundreds more cardboard boxes sit neatly stacked around the room. Some are filled with historically popular seafood like live scallops, salmon and cod, while others are filled with what some refer to as “trash fish,” but what Auerbach likes to call “underappreciated” suspects—Acadian redfish, hake, monkfish, scup and pollock.

“The culinary world has used the term trash fish and I don’t object to it,” Auerbach said. “I think it’s great if it brings attention to less popular fish.”

The term “trash fish” originated in the mid 19th century and stood for fishermen’s catch that was only partly processed—meaning, organs had been removed but the fish were not yet filleted, according to “A History of Fish and Fishing in the Upper Mississippi River,” by HB Carlander. These fish were heavier than fully processed fish and literally weighed down boats on their way to market, slowing them down and threatening to spoil the whole catch. They had to be discarded, hence the term “trash fish.” This expression evolved into a derogatory phrase for any fish that was considered commercially unpopular and undesirable to eat.

The term “trash fish” has caught on in the Boston culinary world, however. Sustainability efforts have led some chefs to use the “catchy” nickname to draw attention to underutilized fish that they say tastes just like more popular species like cod or tilapia, Auerbach said.

“There’s plenty of fish like Acadian red fish, which in a blind taste test holds up to any other fish,” Auerbach said. “For some reason, there’s just not that consumer demand. If you write it down on a piece of paper next to a better-known fish like cod, people will pick cod.”

America’s obsession with cod dates back to the 17th century. Cod was so abundant in the Atlantic then that it was said that you could “walk across the ocean on their backs,” by fishermen, according to the National Oceanic and Atmospheric Administration’s site.

Cod became one of the most lucrative trading products during colonial times in New England and the silvery heavy-bodied fish was ordained as the most succulent white, flakey fish in Georges Bank—the “chosen fish” of Boston, or what Auerbach likes to call “Old school New England crap.”

The species is said to have had its heyday in the 1980s and 1990s, according to NOAA, but in the mid-1990s, overfishing caused U.S. stocks of cod to come close to commercial collapse. Fishing for the species became highly regulated—in Georges Bank and the Gulf of Maine, it was reduced to one-third of its 1994 level by The New England Fishery Management Council.

Despite regulation efforts, NOAA’s 2012 fisheries assessments state that cod is still being overfished despite stocks making some headway. The overfishing of cod not only throws marine ecosystems off-balance, but also hurts New England fishermen who have long made their livelihoods providing cod to restaurants and markets.

This is where Auerbach and “trash fish” come in.

After “cutting his teeth” in the Alaskan commercial fishing industry and taking odd fishing jobs here and there in New England, Auerbach said he founded the seafood distribution company in 2008 as a way to promote environmentally sound fishing.

“A lot of little boats as opposed to one large boat produce the highest quality of wild fish,” the Newton, Mass., native said. “I wanted ways to sustain these small fishing fleets.”

To do so, Auerbach became the go-between for roughly 700 fishermen—“from one guy raking for clams in the mud to huge yacht-type boats trolling for tuna off the continental shelf,” and high-end wholesalers that restaurants buy from. Auerbach created a traceability system that tracks buyers’ seafood from ocean to dinner plate, electronically dog-earing catches from the moment his workers unload fishermen’s vessels, through transportation, processing and distribution.

Every box of seafood distributed by Red’s has a QR code, or barcode, embedded on it. This code can be scanned for access to data about the fisherman who caught your catch, the fish species, the vessel and gear type used to catch it, and the port of origin. The hope, Auerbach said, is that buyers and consumers care about where their seafood comes from.

“We just want to incentivize chefs to support local fishermen instead of importing fish,” Auerbach said.

And a large part of supporting local fishermen involves wholesalers buying what fishermen are able to provide and not putting impossible demands on both fishermen and specific fish stocks like cod. Chefs and consumers alike, therefore, have to be open to trying less popular seafood, Auerbach said.

“I understand fishermen’s hesitancy about that name,” Leviton said. “No fish are trash. But it’s catchy and it does advance the agenda.”

Leviton, a short, wiry 48-year-old with intense brown eyes, has been on the board of the Chef’s Collaborative for the past six years and took part in the “Trash Fish Boston 2014” dinner. Area Four, a restaurant that features gourmet pizza and salads, has been open for the past three years.

Leviton said he thinks it is environmentally and economically important to create a market for these types of fish.

“If we don’t support our fishermen, we’re gone,” Leviton said. “Part of sustainability means making sure everyone along the proverbial food chain is able to make a living doing it.”

All too often, Leviton said, getting cheap calories onto the table drives the American food system. Attendant costs, like the depletion of marine biodiversity and the lack of social justice for fishermen, fall by the wayside.

Much of this comes back to the customer, Leviton said.

“Part of problem is we still are obligated to keep our doors open and we can’t make people buy it,” Leviton said of “trash fish.”

Although customers might shy away from lesser-known fish like pollock and hake on the menu, Leviton uses it anyway. He said he often smokes Acadian redfish for recipes he used to use trout for.

The white, flakey fish tastes just as good, he said, but is often more abundant than trout in fishermen’s catch.

“There are ways to slide it in without them realizing,” Leviton said.

So much of Boston’s rich history is embedded in the fishing industry, Leviton said, and keeping that tradition alive is just another reason he feels it is his duty to be a sustainable chef.

“Fishing is a part of so much of our sense of history as Massachusetts or New England natives,” Leviton said.