BU Students Defy Odds To Become a Part of History 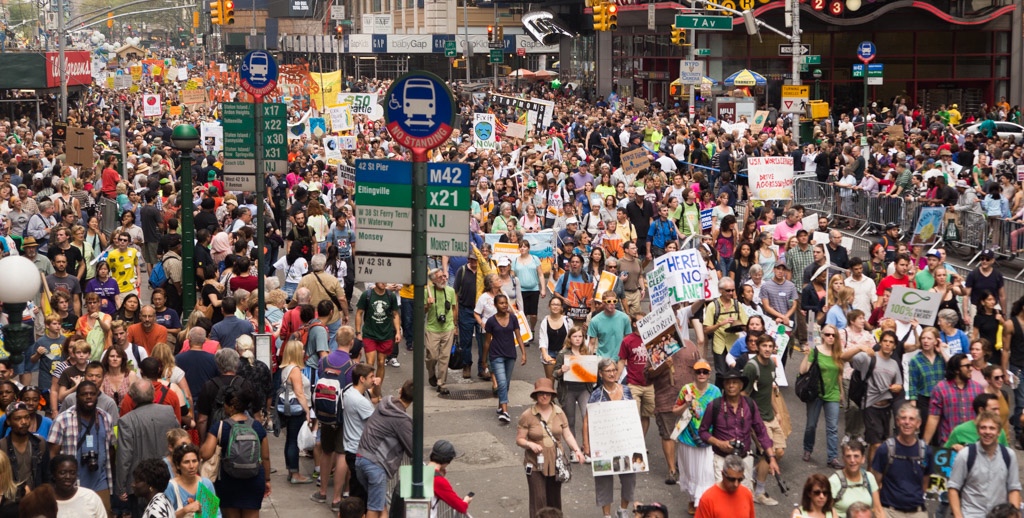 Any other group of young individuals might have given up on their quest after facing as many deterrents as a group of Boston University students faced during their journey to the historic People’s Climate March that filled the streets of Manhattan this past Sunday.

But this group of students, comprised of freshmen in their third week of school to seniors only months away from graduating, could not be kept away.

Determined to make it to New York to be among the hundred of thousands of protestors who flocked to the streets of the New York City on Sunday, September 21, the Terriers, who are a part of the ‘Students for a Just and Sustainable Future’ group on campus, defied odds to march on Central Park and voice their concerns, which they hoped would fall on the ears of world leaders..

Around 50 people currently residing in the Greater Boston area headed to the climate march and gathered outside Ruggles Station near Northeastern University at around 4:30 a.m. on Sunday morning to board the reserved bus that was scheduled to depart for New York at 5 a.m.

Many brought banners with slogans urging for immediate climate policy change, like “There’s no Planet B” and “Climate Policy Now.” It was very early and the sun hadn’t risen yet. Most of the city was still sound asleep after an eventful Saturday night, but the excitement among the hopeful participants was contagious as they waited to be a part of history in the making.

“So I’m going because I would never be able to look my children in their face if I didn’t do everything in my power to make sure they had a world that they could live in,” said one of the participants.

“I’m going to People’s Climate March because it’s really important to have global climate policy and the U.N. Summit can help,” said Caroline Birsner, a BU student, as she waited for the bus.

However, around 5:15 a.m., news broke that the driver of the bus had a personal emergency and wasn’t going to make it to the pick-up location. Trip leader, Isabel Jordan of Northeastern, then made repeated attempts to reach out to the bus owner. At 7:15 a.m. , he said that he didn’t have anyone to bring the group to New York.

The eager activists were disappointed – some returned to their dorms or apartments dejected.

However, a small group of about 18 individuals, most of them BU students along with some Northeastern students and a faculty member, looked for immediate transportation options that would get them to New York right away. The group descended for South Station Bus Terminal while searching for bus tickets online, while another set of BU students decided to carpool to the march and left for the parking lot.

Upon arriving at the bus terminal at around 7:30 a.m., the group dispersed to different ticket counters to inquire if any companies had sufficient open seats for the fist bus leaving the station. Eventually, the group hopped on a Mega Bus that left for New York at 8 a.m., which was scheduled to reach the destination around 1 p.m.

The double-decker bus zipped under cloudy skies and made it to New York just short of noon to the delight of the once discouraged activists.

Relieved sighs and joyous shouts were exchanged among the group which then navigated its way around the New York Subway line and headed off to Central Park where the rally was supposed to start.

The first group of the thousands of protestors had already begun their march at 11:30 a.m. from Columbus Circle and the second installation of thousands more was getting ready to embark on the march as the Boston representatives reached the designated area.

The two-mile long rally was packed with people of all ages, race, gender and occupation. Deafening shouts and drums reverberated on towering skyscrapers across blocks of New York City.

The atmosphere was electrifying. Many news outlets hailed the march as “historic.” It was the largest climate march in history, as an estimated 400,000 people were claimed to have participated in the march. It attracted a fair share of celebrities and leaders including United Nations Secretary-General Ban Ki-moon, former U.S. Vice-President Al Gore, New York Mayor Bill de Blasio, Hollywood stars Leonardo DiCaprio and Mark Ruffalo, and activist Jane Goodall, among others.

The march ended around 4 p.m. Members dispersed around New York to explore the city, while others sat on the street and rested themselves while waiting for the 11 p.m. bus that would bring them back to Boston.

Claire Richer, a senior at BU, said she was very tired after the march but noted that the march was worth the effort.

“Right now, I feel really tired, but it was really, really great amongst so many people who really care about climate change.  It really makes you feel like it’s possible to be able to make a difference,” said Richer.

Hannah Cawley, one of the BU students at the march said it was one of the “greatest unifying experiences” she has ever been in.

“Everyone views it in a different way,” said Cawley reflecting on her experience of the march. “Some people focus on, ‘I’m doing it for my kids, my grandkids.’ Some people focus on ‘I’m doing this because, you know, I’m afraid that our water supply is dwindling.’ The bottom line is that everyone is looking out for the same thing – everyone wants a better environment, a cleaner environment, and a future environment for all of us.”

The IPCC 2013 climate report in pictures and videos