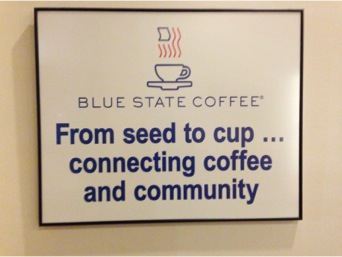 Neil Young coos in the background as bundled up customers hurry in and out of Blue State Coffee shop. Many rush to the counter, but not before noticing the chalk-written message scrawled on the wall above them; “There is nothing wrong with America that cannot be cured by what is right with America.” The words of William Jefferson Clinton compliment the coffee shop, which prides itself on its commitment to philanthropy, sustainability and community involvement.

Blue State Coffee first opened in July of 2007 in Providence, R.I. Its CEO, Drew Ruben, wanted to establish a place where members of the public could contribute to good causes as effortlessly as they purchased their daily caffeine.

“Our owners wanted to do more than the original coffee, so they established a coffee joint that was founded on political grounds,” said Marissa Bieger, manager at the Commonwealth Avenue location.

Bieger, along with each of the other Blue State employees, strongly supports the company’s efforts to offer only environmentally sustainable and fairly traded coffee and reduce potential waste wherever possible. It makes washing dirty dishes and taking out recycling a little bit less of a chore when you know you’re doing something good for a good cause.

“I’m not saving the world, but working for people who care makes work a little bit easier to come to everyday,” said Blue State employee Alex Kramer. A recent Boston University graduate, Kramer has been committed to Blue State and its cause for a little over a year.

Throughout an average day, customers are fighting for a seat in the coffee shop, which opens at 7:00 a.m. and closes at 11:00 p.m.

“We have a lot of ‘regulars’ that know our names and we know theirs,” said Bieger.

Aside from the everyday business crowd, students flock to the shop. Angel Villa, a Boston University junior, said she prefers Blue State over Starbucks “100 percent.”

“Starbucks is really loud and really busy,” she said. “The space isn’t conducive to doing my homework productively.” At Blue State, she said, “the food and coffee is good!”

Lots of things make Blue State Coffee different from any other local coffee shop. The atmosphere is soothing and makes for the perfect study spot. The food is fresh and all the ingredients are locally produced. Most notable, however, is the company’s charitable efforts. Four times a year, each Blue State location donates two percent of proceeds to four local non-profit organizations. Since it opened in 2007, the company, with locations in Providence, R.I. and New Haven, Conn., has donated over $355,000 to more than 150 non-profit organizations.

However, it is the customer that determines how the two percent is divided among these organizations. Each Blue State customer has the opportunity to vote with the drop of a token in a small glass jar, each representative of that quarter’s chosen non-profits. This quarter, customers have four options to choose from: The Big Sister Association of Boston, The Community Legal Services and Counseling Center, The Youth Enrichment Services Program of Boston, and the Mystic River Watershed Association. Currently, it looks like The Community Legal Services and Counseling Center will be receiving the bulk of the two percent, but that could change within a week, when the proceeds are split and the process starts all over.

Sarah Mercurio, a Boston University senior and frequent Blue State customer, dropped her token into the jar designated for The Big Sister Association of Boston.

“I try to vote every time I come in here, which is often,” she said. “I voted for The Big Sister Association program because my friend, Meagan, works with them. She’s a Big Sister to a girl at a local school and she goes to visit her every week.”

Community is surely what makes this coffee shop thrive. Each customer has a voice and most of them make good use of it. Whether they are suggesting new pastries that they would like to see in the glass display case, suggesting non-profits for the next quarter, or promoting their band on the shared community bulletin, Blue State Coffee is to many “my coffee shop.”