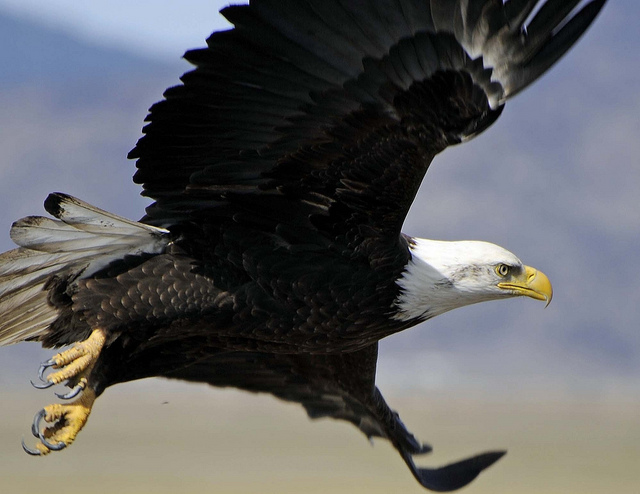 There is nothing more majestic than an eagle soaring through the sky, but the rise of renewable energy—especially wind energy—is encroaching on their airspace with deadly consequences. Last year, the U.S. Fish and Wildlife Service (USFWS) proposed new permit regulations that would allow wind farms and other renewable energy industries to kill a set number of eagles over a period of 30 years. Previously, the permits only lasted five years. Critics argue the proposed changes weaken protection for eagles in favor of promoting the growth of the renewable energy industry. A final decision is expected before the end of the year.

Wind farms—clusters of turbines 30 stories tall with rotors 180 feet wide—kill more than 573,000 birds annually, including 83,000 predatory birds such as eagles, falcons, and hawks, according to a study published in March in the peer-reviewed Wildlife Society Bulletin. The spinning turbine blades can create wind vortexes up to 170 mph that suck birds into the blades, killing them.

As wind energy continues to be one of the fastest growing energy sectors, thanks to the $1 billion-a-year tax break provided by the government, concerns over bird deaths are becoming more urgent. Last year, turbines at wind farms in California, New Mexico, Nevada, Oregon, and Washington, killed at least 27 eagles according to the Associated Press. That figure is substantially underestimated, according to scientists, because wind energy companies are not required to report eagle deaths.

The USFWS hopes to change that and believes the proposed regulations will not only encourage the growth of wind farms, but will also encourage wind farms to be more conservation-minded. Stipulations of the new permit include consultation with the USFWS during design phases, building turbines away from ridge edges to decrease eagle collisions, avoiding the use of structures attractive to eagles for perching such as transmission towers, and implementing advanced conservation practices such as shutting turbines down during the times of day or year when eagles are migrating. “If fatalities were occurring then we would require [wind farms] to implement experimental conservation practices to mitigate the deaths,” said USFWS Biologist and National Raptor Coordinator Brian Millsap. “Once we scientifically show that a measure reduces fatalities, then it would become a formal practice and we would require it as the regulation specifies.”

Some conservationists remain skeptical of the proposed regulations’ scientific rigor. “They need to set up a program that works, which means they need to immediately get started on gathering the data and research to do that,” said Katie Umekubo, a renewable energy attorney with the National Resources Defense Council (NRDC). “There are a lot of data gaps right now that we need to fill,” she said.

However, finding the necessary research funds could prove to be an even bigger challenge.  A portion of the $36,000 per permit fee is intended for research, but that money combined with government funding won’t be enough—at least in this political and fiscal climate, according to Executive Director of the Ornithological Council Ellen Paul. “We are putting a lot of birds at risk. Those turbines will be going for 30 years and all that time people will be hoping to figure out what to do about mortality,” said Paul. “There isn’t enough research money and we don’t know if the research will help us devise meaningful management practices.”

The International Union for Conservation of Nature removed bald and golden eagles from the list of threatened and endangered species years ago, but the birds are still protected under the Bald and Golden Eagle Protection Act and the Migratory Bird Treaty Act. The five-year time-frame allotted by current permits was deemed too short by the USFWS for long-term energy projects to secure funding and other necessary assurances to move forward with construction. No wind farms currently hold permits and only one application is under review—something the USFWS hopes will change under the new guidelines.

Although the proposed permits last for three decades, they would still come with constant and intense oversight. The USFWS would treat the permit as if it were issued in five-year increments, examining data collected on deaths and determining what advanced conservation practices should be applied, Millsap explained. But if turbines continue to kill eagles and operators can’t get it under control, then the USFWS has the right to rescind the permits. Operators would have to decide to cease operation or operate without a permit and risk prosecution if an eagle is killed.

Though the guidelines call for better monitoring, the lack of transparency is troublesome, especially to the NRDC. “We’ve been told that the five year reviews will not be public,” said Umekubo. “One large concern is how we will ensure effective oversight and implementation of the best available science and adaptive management.”