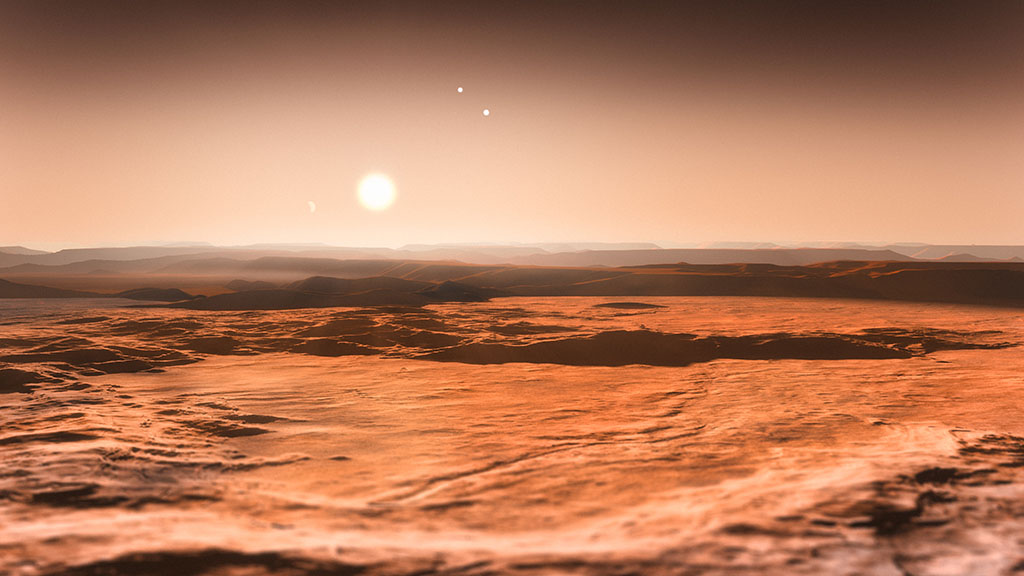 Alien worlds may be even more alien than we thought.

For decades, astronomers’ visions of a habitable planet circling distant stars were like holding up a mirror to our own: it had to be rocky (not gaseous like Jupiter), at just the right distance from its star to support liquid water (not too hot, not too cold), and orbiting a friendly yellow star like our own.

But within the last two years, scientists analyzing data from NASA’s planet-hunting Kepler space telescope have overturned that last assumption. It seems we were blinded by our biases; it turns out that the stars that hold the most rocky planets with just the right temperature are not like the Sun. Instead, they are a long-overlooked class of stars, the most common in the Galaxy: the diminutive M dwarfs. Now, astronomers are paying attention to them. If these systems harbor alien life, we might be able to detect them in less than ten years.

Compared to the Sun, M dwarfs are puny, with half the mass and half the diameter at most. They’re cooler, with surface temperatures that max out at 6700º F, compared to the Sun’s 10,000 ºF.  They give off a faint red glow much dimmer than the Sun’s fiery yellow. To be warm enough to support liquid water, any planet orbiting such a star would have to be close. The star would loom large in the sky, causing tides so great, they would stop the planet’s rotation. One side would be locked into perpetual day, the other in eternal night.

Until recently, astronomers had no reason to think there would be many of these planets around M dwarfs. To be honest, M dwarfs were kind of an afterthought,” says Andrew Howard, who coauthored an August 2012 study of Kepler’s first batch of data when he was a postdoctoral fellow at the University of California–Berkeley. NASA had launched the space telescope in 2009 specifically to find habitable worlds around stars like the Sun. But when Howard and his team ran the numbers on Kepler’s first 1200 exoplanets, they found a surprise: there were many more Earth-like planets around small stars than around those that resembled our sun. They had overturned the very assumptions that begat the satellite’s conception.

These miniature M-dwarf systems filled with rocky planets were an entirely new species of solar system—and highly prized by planet hunters who began to refocus their efforts. “This is where it starts,” says Andrew West, an astronomer at Boston University who specializes in M dwarfs. “When this came out, I was just like, ‘Holy crap. That is awesome.’”

Confirmation soon followed. In January 2013, a Caltech team led by astronomer Jonathan Swift published another analysis of the Kepler data showing that planets seemed to be everywhere—on average, one for each of the 300 billion M dwarfs in the galaxy. The next month, Courtney Dressing and David Charbonneau of the Harvard–Smithsonian Center for Astrophysics announced they’d found an error in the Kepler database that had been overestimating the size of most M dwarfs. This was even better news because astronomers measure the sizes of Kepler’s planets relative to the size of their host stars. If the stars were actually smaller, then so were their planets, meaning a lot more of them are Earth-sized.

With these revised figures, Dressing and Charbonneau concluded there’s a 95% chance that an Earth-sized planet that could support water around an M dwarf is less than 17 light years away, a tiny distance on a galactic scale. If the Milky Way’s diameter of 100,000 light years were shrunk to the size of the United States, that planet would be just a stroll across Central Park.

There’s no consensus yet as to why M dwarfs have so many rocky planets. One leading theory is that since stars and their planets are born out of the same cloud of gas, a small star simply doesn’t have enough leftover material to make large gaseous planets such as Saturn and Jupiter.

Whatever the reason M dwarfs produce rocky planets, it’s a lucky break for astronomers. With the limits of today’s technology, it’s also much easier to find Earth-like planets around M dwarfs than around stars like the Sun. That’s because it’s hard to find planets just by looking—they tend to hide in the glare of their bright stars. Instead, astronomers search for signs of the planets’ influence on their host stars.

They use two main methods. The first is to detect the gravitational wobble of the star as its planet pulls on it ever so slightly. As the star rocks toward and away from us, its light shifts between bluer and redder colors due to the same effect that causes the sound waves of a train’s whistle to shift pitch as it rushes past us. It’s easier to detect this shift in a tiny M dwarf because it gets yanked around harder than a more massive star. Plus, any habitable planets produce an even larger wobble because they are so close to their M dwarfs.

The other method for finding planets is to monitor a star’s brightness, hoping for a planet to wander in front of it, blocking some of its light and temporarily dimming it each time it “transits” its host star. NASA’s Kepler mission exploited this to great effect, using it to discover thousands of likely exoplanets. This, too, is easier with a small M dwarf because the planet blocks out a greater fraction of the star’s light.

Astronomers salivate at the sight of transits for another reason: it gives them the opportunity to detect life. A planet that transits also disappears behind its host star on the other side of its orbit. This allows astronomers to measure the star’s light alone. Then, they can subtract the starlight from their previous measurements, isolating the effects of the planet and its atmosphere.

After NASA’s next-generation James Webb Space Telescope (JWST) launches in 2018, one of its projects will be using this technique in an attempt to find the chemical footprints of organic molecules in exoplanet atmospheres. According to Jonathan Lunine, a planetary scientist at Cornell and member of the JWST science team, it will focus almost entirely on M dwarfs to maximize their chances.

Despite these advantages, any claim that a planet around an M dwarf is truly “habitable” comes with caveats. One is that the stars’ strong magnetic fields twist and writhe, releasing enough UV radiation to sterilize the planet. Life on Earth copes with similar flares from our own Sun, which occasionally disrupt satellite communications, but they’re much weaker—“microscopic in comparison,” says Howard.

Another worry is that when a star is born from its nebulous nursery of gas and dust, all that coalescing material keeps the young stars hot well into middle age. In an M dwarf, this period lasts much longer than a sun-like star—so long, that it could boil away a young planet’s oceans. “You basically get a Venus scenario,” says Gibor Basri, an astronomer at UC–Berkeley and an early proponent of M dwarf studies.

If there are oceans on planets around M dwarfs in which life can spawn and flourish, there is one thing working in its favor: time. As the M dwarf ages its rotation slows down, weakening its magnetic field and reducing the amount of UV radiation. So even if James Webb doesn’t discover any life around M dwarfs in our epoch, West is optimistic that life will have a chance in the future. Unlike our Sun, which will run out of fuel, sputter itself away, and die within 4 billion years, M dwarfs are “the VW Beetles of the galaxy,” says West. They can last for up to trillions of years—thousands of times older than the current age of the universe. “It may just be we haven’t been around long enough to really see M dwarf habitability,” he says. “You could imagine that when the first round of M dwarfs’ [magnetic fields] really shut off, then maybe life sets up. … We might be at the wrong time.”