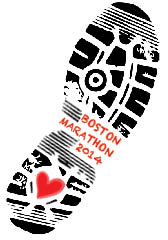 Last April, Paula McLaughlin said she was at the finish line of the Boston Marathon taking pictures of the five runners on her team when the first bomb went off.

All she could see was smoke, pluming up like a mushroom cloud, she said.

“It was so loud,” McLaughlin said. “It was deafening. And I could taste it. I could sort of feel the smoke in my throat,” she said.

Although she was only about 90 feet from the bomb, she said she was not injured, but did not sleep well for months afterward.

McLaughlin, 48, is the director of development and public relations of Hale Reservation, one of the charities raising money for the marathon this year. Hale Reservation is a non-profit educational organization, in Westwood, best known for its summer camps for children from low-income schools.

Last year was the first time Hale Reservation joined the Boston Marathon as a charity. Fifteen people ran for Hale Reservation then, and five of them crossed the finish line before the bombing. The size of the team is the same this year with ten of last year’s runners, including the seven who didn’t finish because of the bombing.

After the bombing, McLaughlin said she told her friend Jeff Mahoney that no one was ever going to want to run for her or for Hale again. But Mahoney disagreed, she said, and told her that everybody was going to want to participate next time. Once the marathon runner’s application process had been closed, McLaughlin still got emails from different applicants every day.

In their team, most of the runners are local residents who serve on their charity’s board, or have worked for Hale as lifeguards and swim instructors.

“They know the kids that are benefiting from the charity money,” she said.

With a “Did Not Finish” pass from the Boston Athletic Association, the seven runners who didn’t finish could have run this year without fundraising from any charity. However, they chose to raise money again, McLaughlin said.

The highest record now is almost $9,000 for a single runner.

They raised money primarily for the kids to participate in science education or a team-building program.

“We serve 4,400 children each summer, and about half of them come to Hale with financial aid,” McLaughlin said. Between 800 and 900 of the kids come from Boston.

All charity and nonprofit programs involved with the marathon have raised over $23 million so far, according to Crowdrise, an online donation website.

Another foundation fundraising was formed by the parents of eight-year-old Martin Richard, who was killed in the marathon bombings.

Hurley has been assisting charities, such as Team MR8, to raise money and train runners for seven years.

Charity Team is assisting 21 teams this year, including 321 runners. The total fundraising goal is $3 million, and they are a little over $2.6 million now, according to Hurley. Last year, with 250 runners, they raised $1.6 million.

To cope with re-emerging feelings about the bombing, Hurley brought a trauma specialist to a meeting to help this year’s runners who also ran last year to overcome the emotional difficulty.

“Remember what happened, but try to move forward and make it a happy event for this year,” she said. “Because the Boston Marathon should be a happy event.”