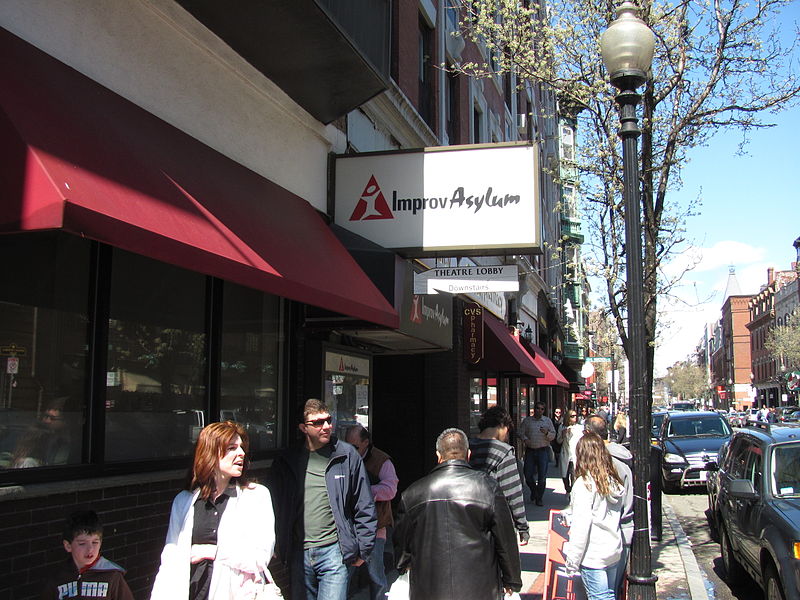 On any weekend night, Kelly Dooley is an overbearing North Shore mother, a ditzy Fox News correspondent, a repairman, an opinionated cafeteria lady, the victim of a serial killer, and a Facebook addict.

Wearing a black dress with her blonde hair half-up and a pair of fashionably big glasses, Dooley looks more suited to attend a cocktail party than to perform on the Main Stage of Boston’s Improv Asylum. Yet, despite the lack of props, scenery, or costume changes, Dooley is a chameleon, embodying each character she plays with a versatility reminiscent of her comedic idol, Amy Poehler.

Watching Dooley on stage, it is hard to believe that the 26-year-old Peabody native had never even participated in improvisational comedy until her freshman year at Suffolk, when her roommates signed her up for an audition with Seriously Bent, the University’s award-winning improv group.

“I always used to watch SNL and I loved it and wanted to do it. I just never realized how,” Dooley said. “I went in and auditioned and I made it. It was such an eye-opening experience.”

After joining Seriously Bent, Dooley says that she was “bit by the bug.” She decided to try out with the Improv Asylum, first performing with NXT, which Dooley describes as the Asylum’s “junior league,” and then working as an understudy before starting as a Main Stage cast member in 2012.

In both the improvisational and sketch portions of the 90-minute long Main Stage shows, Dooley shines in her ability to bring out the best in each of her five fellow cast mates. If improvisational comedy is a team sport, then Dooley is the most valuable player at the Improv Asylum.

Patty Barrett can attest to that sentiment. Barrett, one of Dooley’s closet friends, has known Dooley since they met and began performing together at Suffolk in 2007. They worked together at the Improv Asylum for more than two years before Barrett moved to Los Angeles to pursue a television career.

“Kelly has a great way of being herself on stage,” Barrett said. “She’s a really great improviser and never fails to crack me up with her funny voices. When she comes out in a scene I’m in, I know that I’m going to be supported and I’m going to have a lot of fun.”

Off stage, Dooley is down-to-earth with a sharp, self-deprecating wit and an infectious laugh that seems entirely too boisterous to come from such a petite person.

She jokes that she dresses like a McDonald’s employee, but in a blue Ramones t-shirt with a bright yellow hoodie, hair up in a high bun, Dooley looks more like a busy young artist.

A typical performance day begins at noon, when Dooley and her cast mates pitch rewrites and rehearse and retool material until 8 p.m., when the first show of the night begins.

“More often than not, we’re scrambling, so you run and get dressed and hope that you remember stuff,” Dooley said. “That’s the most stressful thing about rehearsal — getting the material up and hoping that it goes well because everyone’s on their feet. But I think it’s so exciting, too.”

For Dooley, making the audience laugh is serious business. Dooley’s introduction to improv when she was 19 coincided with her mother’s death, and Dooley said that comedy “saved” her. She, in turn, wants to better the lives of her audience through laughter.

“I feel lucky doing this because it’s an hour and a half of someone’s life where they’re coming down here and they’re watching something really happening,” she said. “It’s a shared experience we all have. It’s an escape, a tiny vacation.”

Dooley is constantly challenging herself to move outside her comfort zone when it comes to her comedy.

“If I do the same character a bunch in one week, I want to crush myself because I’m not challenging myself and I feel like a hack,” she said. “So, that’s the biggest thing that goes through my mind: changing it up and really surprising myself and my cast mates.”

Dooley’s desire to push her limits has led her to delve into writing sketches for the Main Stage shows and teaching improv classes to amateurs, two things that she says she loves because they make her nervous.

There is no sign of those nerves during the Character Development course that Dooley teaches at the Improv Asylum on Wednesday evenings. The seven students in the class all tower over her, and yet Dooley is in charge, striking the perfect balance between enthusiastic cheerleader and authoritative instructor.

With a notebook full of constructive feedback on her lap, Dooley watches each student as they perform monologues and scenes about obnoxious co-workers, skydiving, and Build-a-Bear, making suggestions and, on occasion, laughing aloud.

According to Amelia Ariel, a 20-year-old Emerson College student who is currently studying screenwriting, that laugh is what Dooley’s students are hoping to get each time they come to class.

“Her laugh is really unique and hilarious, so when you hear Kelly laughing, then you know that you’ve done something great,” Ariel said.

For Dooley, the classes are not about teaching people to be funny. Instead, she uses the most fundamental rule of improv — always say “yes, and” — to instill her students with a deeper philosophy.

“People are taking these classes for all different reasons — to get over public speaking fears, or just think faster in a work environment,” she said. “Saying ‘yes’ and moving forward and trusting one another is a great philosophy to live by. I always say, ‘here comes my hippie rant,’ but it’s true. I do believe that.”

Ariel says that improv classes have given her more confidence and have helped her to build relationships with her fellow classmates. And, as an aspiring comedy writer in a largely male-dominated field, Ariel says that having a young female teacher is “refreshing.”

“Kelly’s actually not that much older than me, so that’s something that’s really encouraging to me,” Ariel said. “I think she has some of the best character work I’ve seen at the Improv Asylum. That’s something to aspire to.”

In fact, one of Dooley’s reasons for teaching improv classes is to pass on her love for comedy to other young girls and to perpetuate a strong female voice in the world of comedy, just as comediennes like Amy Poehler did for her.

Dooley blames antiquated social norms for the idea that female comedians are not as funny as their male counterparts.

“To me, it’s just dumb,” Dooley said. “The way I look at performing, I’m not male or female; I’m a part of a cast. The way we do things is kind of gender neutral. And that’s how I look at comedy. If something’s funny, it’s funny.”

Having met her goal of making the Main Stage at the Asylum, Dooley is considering what her next move should be on the path toward her dream of becoming a cast member on Saturday Night Live.

“I just want to successfully do this for the rest of my life, in whatever capacity, whether I make it big or am doing shows every now and then,” she said. “I’m not letting this go.”