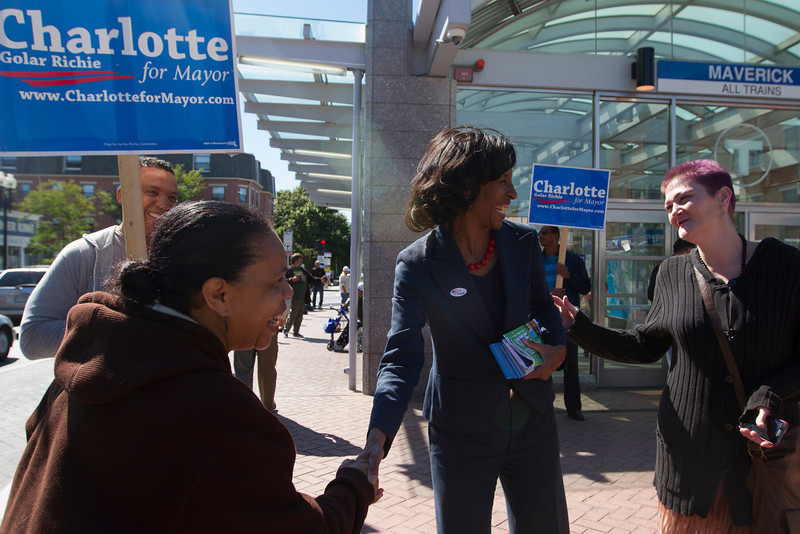 Minorities in Boston were empowered by Charlotte Golar Richie’s campaign for mayor despite the candidate’s loss, her supporters said.

“Charlotte Golar Richie may not be the next mayor, but she’s the first black woman to run and make a name for herself,” said professor Charles Ogletree of Harvard Law School, senior advisor to Golar Richie. “We’ve opened up dialogue all over Boston.”

Golar Richie came in third in the preliminary Boston mayoral election on Tuesday night, earning 13.8 percent of the popular vote. Even though she lost to Martin Walsh and John Connolly and she will not be continuing in the race, Golar Richie’s supporters at her campaign celebration at the Fairmount Copley Plaza still believed that she made a difference for the city.

“Charlotte has a lot to offer,” said Patricia Lynch of Mass Women’s Political Council, which endorsed the candidate early on. “Of course I’m disappointed.”

Lynch said she hoped that women of Boston will follow Charlotte’s example.

“We need more young women to put themselves on the line,” said Lynch.

Golar Richie represented more than just the female community, according to her supporters. She wanted all minorities to feel they had a voice.

“We wanted to be a bigger and better city,” she said. “And not just for some of us—for all of us.”

“The campaign wanted to capitalize on the minorities,” said Kim Vermeer of the South End, a volunteer for Charlotte. “The minority communities are mobilizing and making their voice heard.”

Vermeer was one of many wearing a sticker that proclaimed, “I voted in honor of Trayvon Martin,” right below her “Charlotte Golar Richie for Mayor” badge.

“If you talk about Charlotte Golar Richie, you better talk about Trayvon Martin,” said Ogletree.

Golar Richie joined rallies to protest the not guilty verdict in the trial of George Zimmerman this summer. She thought the trial was an issue important to both minorities and young people of Boston.

“We want our young people to know that they have a stake in this city,” she said on Tuesday night. She mentioned the youth forum she hosted to talk about the Zimmerman trial, saying that she hoped Walsh and Connolly would take up the dialogue with young voters.

Golar Richie specifically thanked all her young supporters. She had many young men and women, some not even old enough to vote, present at her campaign celebration on Tuesday.

The race is over for Charlotte but she does not plan on letting her plans for the city end with her campaign. She plans on speaking to both Walsh and Connolly about her ideas for housing, gun control and job creation in Boston.

Martin Walsh finished on top in the Tuesday night preliminary, clinching 18.5% of the vote. John Connolly came in second with 17.2%. The two candidates will face off in the November general election.