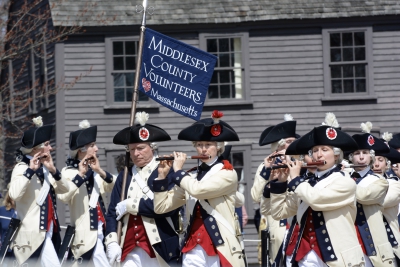 Festivities celebrating Patriots’ Day, which commemorates the start of the American Revolution, kicked off last Saturday with the Meriam’s Corner Exercise, an event held each April in Concord, Mass.

A field stood empty, save for lines of rope strung up on wooden pickets and a small stage where local dignitaries and honored guests would later watch the celebration. It was a warm, sunny spring afternoon, with temperatures reaching the upper 60s, and as the exercise drew closer, families with young children, mostly under the age of 10, wandered in from the parking lot and the makeshift spots on the tall grass behind. Police blocked the road and redirected traffic, and the field, surrounded by stone walls, slowly filled with spectators.

Little boys carried fake muskets and wore tricorne hats, triangular hats popular in the 18th century, while some families lounged on lawn chairs and ate snacks from coolers. Park rangers, dressed in olive green pants, brown shirts and khaki vests and sweaters, monitored the perimeters. There was a sense of anticipation in the air as restless children asked when the reenactment would start. Slowly and softly, the sound of the drum and fife corps could be heard in the distance, a low, rhythmic beat that came from the surrounding woods.

The thump grew steadily louder until the corps was visible, marching in time on Old Bedford Road, carrying American flags. The fife players wore tailored white coats, trimmed with navy blue and adorned with large silver buttons, red vests underneath, and white pants. Each man’s head was adorned with a white wig, a ponytail tied low at the neck with a blue ribbon, and topped by a dark hat with a white feather.

They stopped before the field and then marched through the roped section, before finally settling, followed closely by groups of local militia reenactors. These men wore various shades and styles of brown vests and breeches, with tailored white shirts and stockings, one man carrying a flag for each militia.

There were three minutemen militia groups in attendance, from Acton, Bedford, and Burlington, Mass.  Brass cannons were fired, first hand accounts from colonists were read aloud, and the Star Spangled Banner was played and followed by a gun salute. Onlookers lounged on the grass, some craning for a better view with cameras in hand. Excitement pulsed through the crowd, but the day was equally weighted with solemnity of the commemoration. Deacon Gregory Burch reminded those present that they were standing on fields “watered with the sweat of determination and grief.”

Nancy Nelson, Superintendent of the Minute Man National Historical Park said the reenactors “remind us of the real people whose paths crossed here so many years ago.”

It celebrates the first purposeful battle, Roger Fuller, a National Park Services ranger, said. He stressed that there is an “uncertain knowledge base” about the exact events that took place in Concord that day, however, but it is generally believed that colonists opened fire on a British troop of 700 marching back to Boston.

They hid behind a house that once stood in the field where the celebrations took place, he explained. Colonists were frustrated over British ruling and for being taxed without having a voice in Parliament. It was a “local dispute over sovereignty,” he said.

The British troops were on a secret mission to seize gunpowder in Lexington, Mass., before marching on Concord, according to MOTT. The troops the Red Coats met in Concord fought successfully, however, keeping their gunpowder and sending the British back wounded and empty handed. Now, each April, reenactors pay tribute to the victory with the Meriam’s Corner Exercise and Patriots’ Day celebrations.

Fuller estimated that 110 uniformed reenactors participated in this year’s exercise and that most of them were locals. “It’s very personal to them,” he said, explaining that many of them are ancestors of some of the original colonists. His own ancestors date back to the Continental Army, which was established by the Continental Congress in June of 1775, he said.

The Meriam’s Corner Exercise wasn’t the only part of the celebration of Patriots’ Day last weekend. There was a reenactment of the capture of Paul Revere and reenactors wandered the grounds of the Minute Man National Historical Park, answering visitors’ questions. Near the North Bridge, the site of the “shot heard ‘round the world” is an inscription commemorating British soldiers, where one such soldier, fully uniformed, stood watch. Dressed in a red coat, white breeches and tall boots, a heavy gold plate around his neck, and small circular glasses on his eyes, Steve Leet, an Andover resident, reenacted the role of a Quarter Master General for the British soldiers in Boston. Leet stood still, unsmiling, invoking the slightest bit of unease, like any real British soldier presumably would have.

However, the illusion was shattered when he spoke, his native Quincy accent strong. Leet has been reenacting for 22 years and said he always had a great interest in history. He has been involved in reenactments from Quebec City to Williamsburg, Va. Leet explained that he made his own outfit and that it was authentic and “conformed to 1765 standards,” except that it was sewn on a machine. He was one of the many reenactors who took part in the celebrations in Concord last weekend, and is one of many more who will take place in upcoming celebrations.

Patriots’ Day activities include a dawn salute at North Bridge in Concord, the arrival of the Sudbury militia at North Bridge, and a battle reenactment in Lincoln.