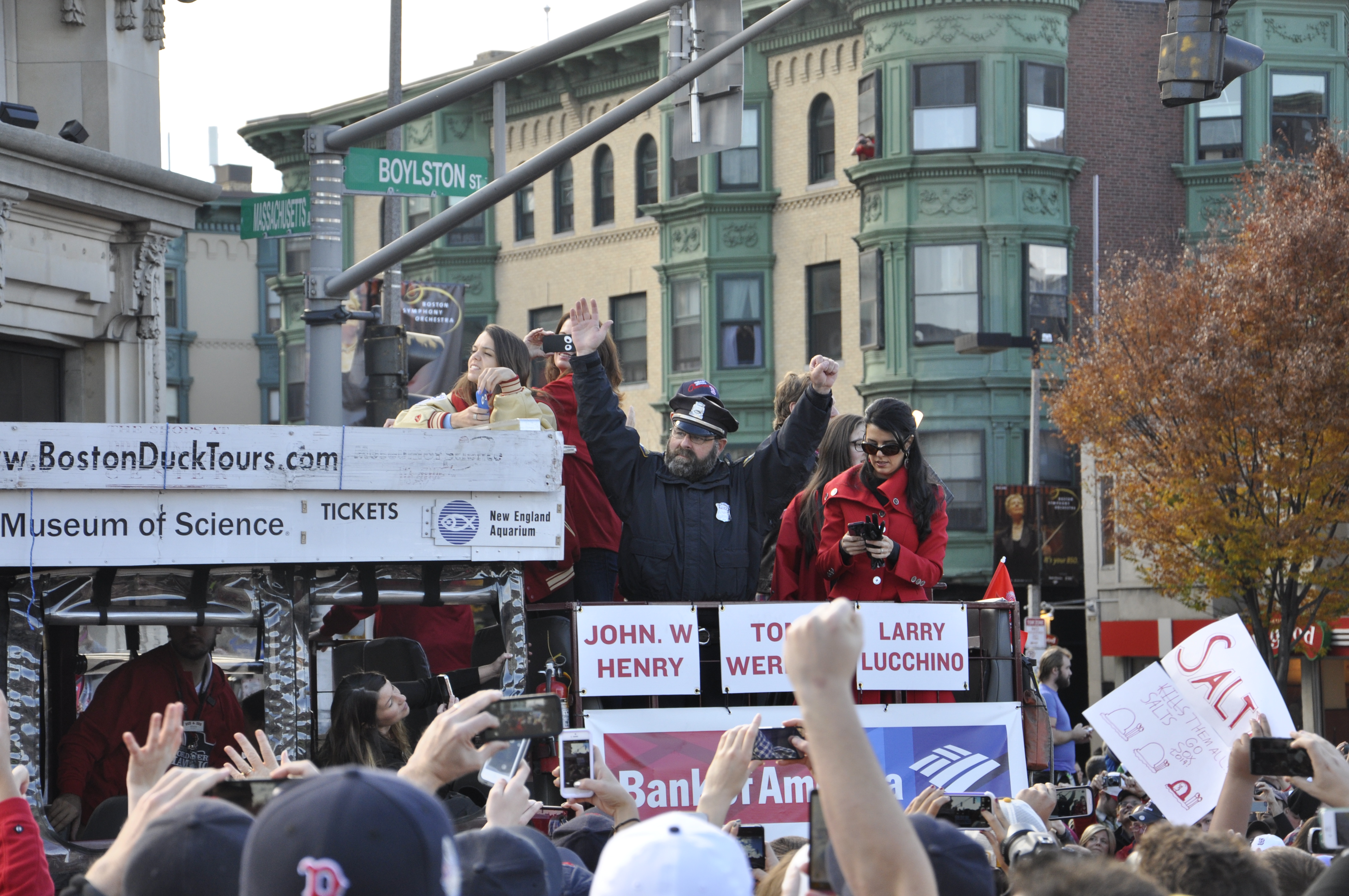 As hundreds of thousands of fans lined the city’s streets loudly cheering them on, the Boston Red Sox’ “Rolling Rally” snaked through the city on Saturday to celebrate their World Series victory. A fleet of “duck boats,” which travel on land and water, carried the players, staff, and a few musicians from Fenway Park down Boylston Street, the site of the Boston Marathon bombings, into downtown Boston, and then for a ride down the Charles River.

“I wanted to be here because everybody else was,” said John Hanes of Concord, Mass. He had seen earlier World Series victories by the Red Sox, but he was especially impressed with this team. “This year you felt like it wasn’t about the money,” said Hanes. (Even though the Red Sox had the fourth-highest payroll in Major League Baseball this season.)

The day’s atmosphere reflected the quirky nature of this year’s team. There were fake beards, ski goggles, and clever signs everywhere. Fans held signs reading “Beard Champs,” “Worst to First,” “Big Papi for Mayor.” One congratulated the “World Series Cup Winners,” tweaking Boston Mayor Tom Menino for a gaffe he made earlier this week. One man walked down Boylston street shouting, “Game seven tickets, get your tickets,” even though the team won the game in six.  There were also “rally monkeys” for sale along with loud vuvuzela horns. A man in a Wheaties Box costume that showed pictures of this year’s team was greeted with cheers walking down Boylston Street.

The victims of the Boston Marathon bombings were remembered when an announcement came over the loudspeakers hooked up to each of the duck boats asking for a moment of prayer. The crowd joined in a rendition of “God Bless America.” Further down the road, in one of the most touching moments of the day, Red Sox players Jonny Gomes and Jarrod Saltalamacchia got out of their boats and placed the World Series trophy at the Marathon finish line along with a jersey that read “Boston Strong 617.” Boston’s area code is 617.

Forum restaurant and bar, which was the location of the second marathon explosion, was packed with parade watchers. Red Sox pitcher Ryan Dempster pointed at the crowd standing on the patio and cheered them on.

The parade was extra special to some. “This year it means a little bit more,” said Heather Rakoski from Onset, Mass., who wished she could be celebrating with her niece, who was studying abroad in Australia.

Many fans didn’t expect this day to come, as the Red Sox were predicted to finish last in their division after a dreadful 2012 season. Kyle Rigsby, Todd Daron, and David Harr, who have been friends since high school, were in town to play a baseball tournament at Fenway Park on Sunday. “We thought we were going to play in October, but it kept getting pushed back because they were doing so well,” said Rigsby. “It’s surreal to be here,” he added. 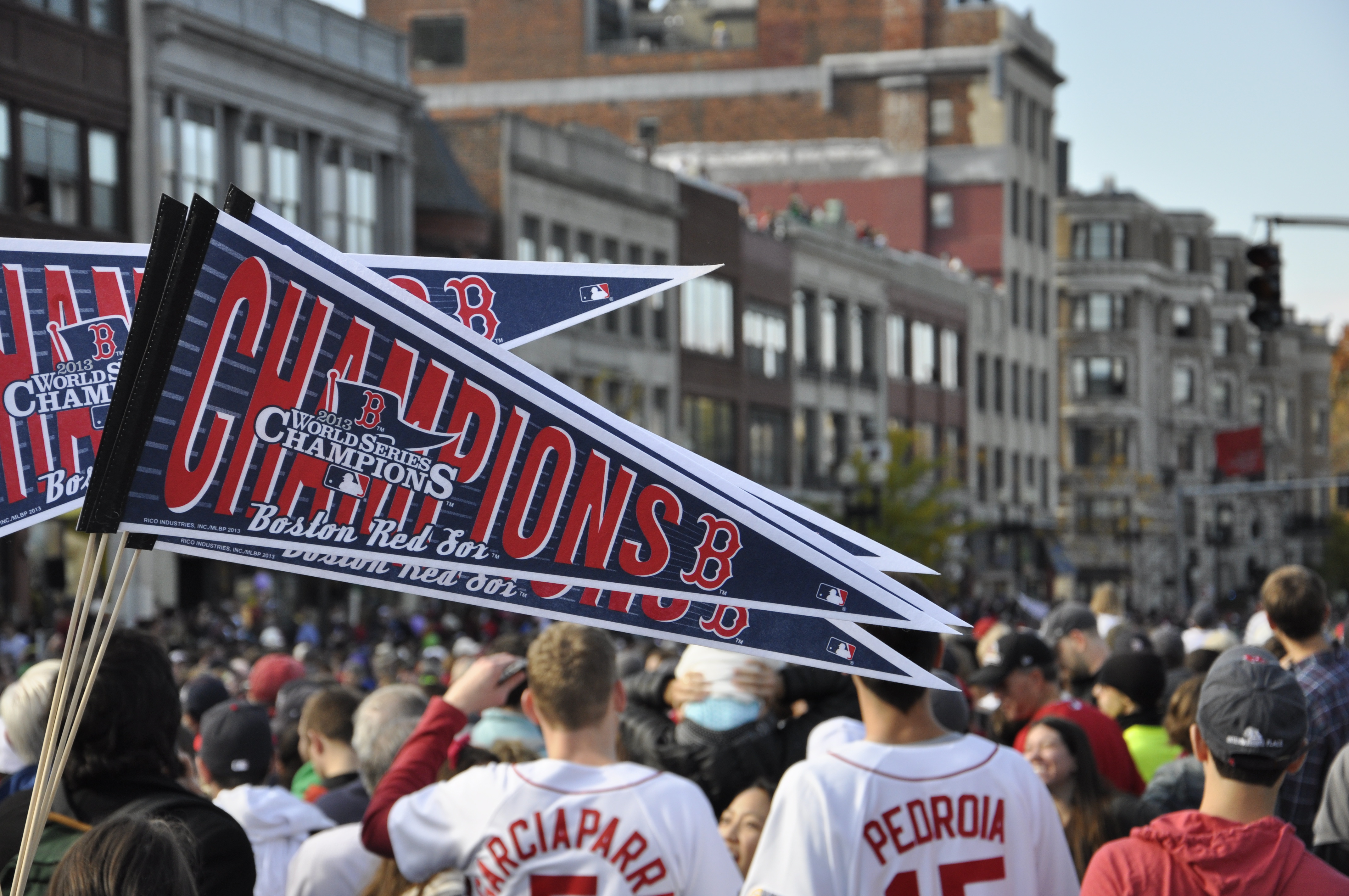