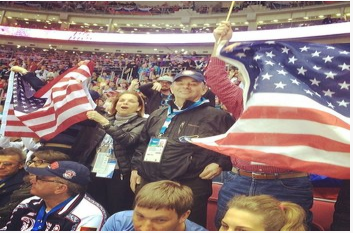 After pounding both Slovakia and Slovenia and edging Russia in a shootout thriller, the United States men’s national hockey team earned the No. 2 seed and will earn a bye round that will take them to the quarterfinals on February 19.

Coming into the Olympics, Team USA’s inexperience and youth was a big reason why they were given the fourth-best odds to win the gold medal. In other words, Vegas didn’t even expect this team to medal. However, three games into the tournament, the world has seen the explosive offense, stellar goaltending, and most importantly, the team’s camaraderie and team-first mentality that has all of a sudden turned them into a gold medal contender.

The Americans have lived up to their expectations offensively. Everyone knew they had a lot of firepower on the wings. Phil Kessel has scored four goals (including a natural hat trick Sunday against Slovenia), and Paul Stastny and David Backes each have two. T.J. Oshie became an overnight sensation because of his breakaway talent on the shootout against Russia, cashing in on four of six attempts. They’ve outscored opponents 15-4 in round robin play.

But the second number in the aforementioned statistic is a testament to solid defensive play and outstanding goaltending by both Jonathan Quick and Ryan Miller. Quick is showing shades of 2011, when he led the Los Angeles Kings to a Stanley Cup championship through his shutdown play. Meanwhile, Miller was fantastic against Slovenia, turning away 17 shots in the win.

Finally, Paul Martin and Brooks Orpik are translating the chemistry they have developed as a defensive pairing in Pittsburgh very well in the Olympic games. Team USA’s goaltenders don’t have to face plenty of shots because of the American defense preventing opportunities from the opponent. The back-end of the defense, which was considered a weakness for the Americans coming into the tournament because of its inexperience, has turned into a strength. Ryan McDonagh, John Carlson, and Cam Fowler have all scored goals and played stifling defense.

Most importantly, though, the Americans have turned into gold medal contenders because of their team chemistry. There’s a different hero every night for Team USA, but nobody ever wants to take full credit. They not only play as a unit on the ice, but they are one off it. They are quick to give credit to their other teammates after good moments.

This team doesn’t have the star power that Finland, Canada, or Russia has. They don’t have a transcendent star like Sidney Crosby of Canada or Alex Ovechkin of Russia. What they do have is an elite head coach in Dan Bylsma, who has taught this team to play as a collective bunch where they play for each other. This has translated extremely well on the ice and the Americans enter the quarterfinals with their heads up high as they await the winner of Czech Republic and Slovakia.