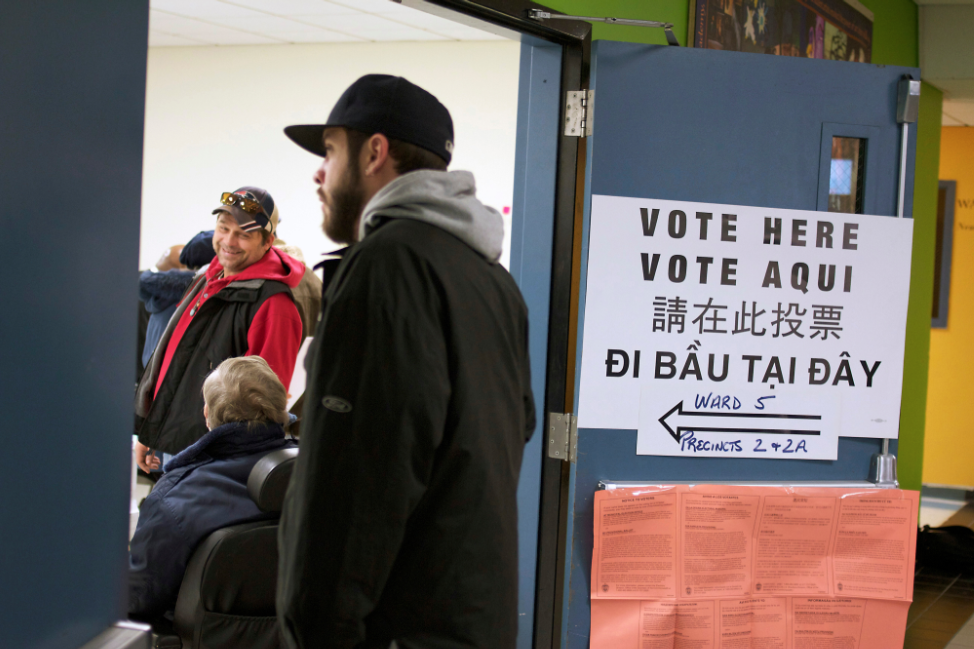 BOSTON—The two teenage poll workers at Brookline’s Town Hall are similar to the typical Massachusetts voter in that they’re rooting for Obama and Warren. They differ, however, since while they’re passionately involved, they’re also ineligible to vote.

Ilana Curtis and Elizabeth Doyle, 16-year-old juniors at Brookline High School, said that they volunteered to be poll workers because they were curious about the whole process of voting. “My sister did it for the last Presidential election and she said it was really interesting,” Curtis said. There are nine student volunteers this year.

This election marks the second Presidential contest in which Brookline high school students have been allowed to volunteer at the polls, thanks to Massachusetts’s “Student Election Assistant Statute,” which allows 16- and 17-year-olds to volunteer with the permission of their parents and school.

Curtis and Doyle both said that they watched the debates and try to keep up with politics. “When I was younger my parents influenced me, but now that I’m older I’m starting to watch the news and to have my own opinions,” Curtis said.

Britt Braudo, who at 24 looks little older than Curtis and Doyle, started as a volunteer when she was 18, before the Student Assistant Statute was passed. This year is her second as a poll worker for a Presidential election. She said that helping out is a rewarding way to get involved, and that she regretted not having the opportunity to volunteer in a state and local election when she was in high school.

“When I was under 18 I didn’t know anything about what was going on, and once I was 18 I didn’t know what I was doing,” she said with a wry smile. “I would have loved to have had the opportunity to do it.”

Assistant Town Clerk Linda Golburgh said that organizing the students takes a little extra effort, but in the end it’s worth it. She coordinated with the League of Women Voters of Brookline to find and assign the nine high school students to precincts.

Golburgh, who has worked in the Town Clerk’s office for 18 years, said that having teenage workers around is a win-win for both the older and younger poll workers. “They do everything that a regular poll worker does, and they get to see behind the scenes,” she explained.

According to Golburgh, the high school students learn a few important lessons—one being that you can’t run an election without poll workers, and another that voters take the act of casting their ballot very seriously.

“The least that I hope comes out of this is that they always remember to vote,” she said. “If I could know that, I would be thrilled.”