Walsh and Connolly to vie for Mayor of Boston 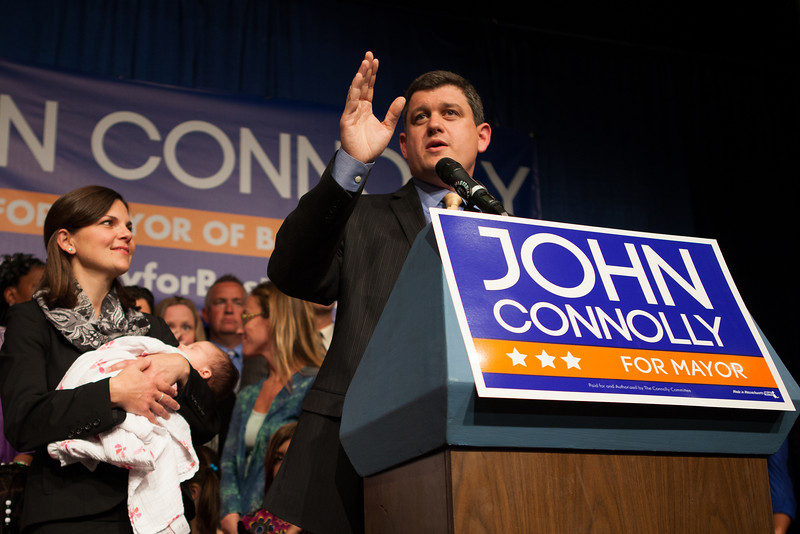 “I have never been more thankful to be in second place in my life,” Connolly said, addressing his campaign party’s reception Tuesday at Hibernian Hall in Roxbury.

The November election will name the successor to Boston Mayor Thomas Menino, who will retire following 20 years in office.

Connolly took the stage in Roxbury as final votes were tallied–fitting to his campaign platform–to the chorus of Jackson Five’s “ABC 123.” Connolly’s focus on education reform is one of the most emphasized pieces of his mayoral campaign.

“I’m running for mayor because I know that together we can transform our schools so that every child receives a high-quality education,” Connolly said at the reception. “And together we can build safe and healthy neighborhoods–and ensure that everyone has access to great jobs.”

Connolly’s connections to education were emphasized throughout the night through references to both his previous employment as a public-school teacher and also the number of campaign supporters who are parents with school-age children in the Boston area.

Yet not all of Connolly’s supporters are singularly focused on his dedication to education reform. Some, like Sherry Dong of Jamaica Plain, were drawn to working with the Connolly campaign for the overall progressive attitude that they feel he would bring to the office.

“I’ve known [Connolly] since he was on the council and I’ve seen how open and representative he is of the whole city,” Dong said. “So, to me, it’s the balance that he represents and the vision and new ideas that he brings.”

Dong said that moving forward Connolly’s campaign has a clear differentiation from Walsh, which should aid decisions for undecided voters.

“I think the two candidates are very different,” Dong said. “It will make a clear choice for people.”

Dong echoed Connolly’s reception address remarks that the campaign has busy weeks ahead, amping up the campaign to attract voters like Luis Groz of Boston who did not go out to vote tonight.

Groz plans to vote November 5 but did not visit the polling stations Tuesday. He said he felt that many were waiting to vote after the pool of 12 candidates had been narrowed in Tuesday’s preliminary.

Others, like James Peterson of Roxbury, who voted for Charlotte Golar Richie, will need to be swayed from other preliminary candidates.

Peterson, who is concerned with crime and safety, said it was straightforward for him what a candidate would need to do to earn his vote: “I need people more involved in the community.”