Tired of the political ads? Smile, you could live in Virginia

WASHINGTON — Massachusetts voters may feel deluged by a torrent of negative attacks in this year’s Senate race, but it could be much worse had the candidates not signed a pledge banning outside advertisements – at least based on the situation in other states with highly competitive Senate contests.

For example, in the Virginia Senate race, outside groups have spent more than $34 million, mostly on TV advertising, while spending by outside groups is less than $4 million in Massachusetts, largely on door-to-door campaigns, mailers, and phone calls.

“I think a lot of Virginians are using the mute button,” Hayes said.

Hayes said the growth of outside spending in campaigns allows candidates to focus on a positive message themselves, while letting other groups focus on attacking the opponent. But Hayes said in a race such as Massachusetts, negative ads would still exist — as they did in previous campaigns.

“The differences may be more in degree than in kind,” Hayes said.

Responsible for the growth in out-of-state campaign spending was the 2010 Citizens United case, where the Supreme Court ruled that groups not coordinating with a candidate’s committee could spend unlimited amounts of money either advocating for or against a candidate. Outside spending from so-called “Super PACs” and other independent expenditure groups has since exploded.

According to the Center for Responsive Politics’ website, Opensecrets.org, in the 2010 election, outside groups spent $255 million. In 2012, such groups have spent more than $900 million so far.

The Federal Election Commission reported that in Senate candidate treasuries, Republicans have out raised Democrats nationwide $341 million to $266 million. The financial edge is larger in outside groups. Opensecrets.org estimated that, within the outside spending, at least $496 million came from conservative groups, while at least $209 million came from liberal groups.

In a look at five other Senate races that have polled closely all year, outside groups favoring Republicans have been more reliant on advertising, with 89 percent of their funds spent on ads versus 84 percent for by those supporting Democrats.

Spokesmen for both Massachusetts Senate campaigns said via email that the so-called “People’s Pledge” has helped voters focus on the candidates and succeeded in keeping outside groups off the airwaves.

The People’s Pledge, signed by both campaigns in January 2012, was intended to bar outside groups from spending money on television, radio, or Internet advertising in the Massachusetts Senate race. If an outside group violated the pledge, the candidate who they aided would donate half of the ad’s cost to charity of their opponent’s choice.

For example, when the American Petroleum Institute ran an ad at one point,, Scott Brown donated $34,545 to the Autism Consortium.

Anthony Corrado, a political science professor at Colby College in Maine, said that without the pledge, the Massachusetts race might have resembled the 2010 Nevada Senate race, which became a national focus with both the parties and outside groups invested in the fate of Majority Leader Harry Reid.

“This is in some ways the marquee race in the Senate this year,” Corrado said of Brown-Warren in a phone interview.

Outside groups spent more than $20 million in the Nevada contest, according to OpenSecrets, mostly on negative advertisements.

David Hopkins, a political science professor at Boston College, believes the pledge may have affected Brown’s campaign at the margins.

“Most of the outside money in other races is coming on the Republican side,” Hopkins said in a phone interview.

Hopkins said the majority of ads by outside groups are negative, while a candidate’s own campaign committee has to balance attacks by building up the candidate’s own image. Hopkins also said that money begins to produce diminishing returns for campaigns.

“Above a certain point, you can spend a million more and it doesn’t make a difference,” Hopkins said. 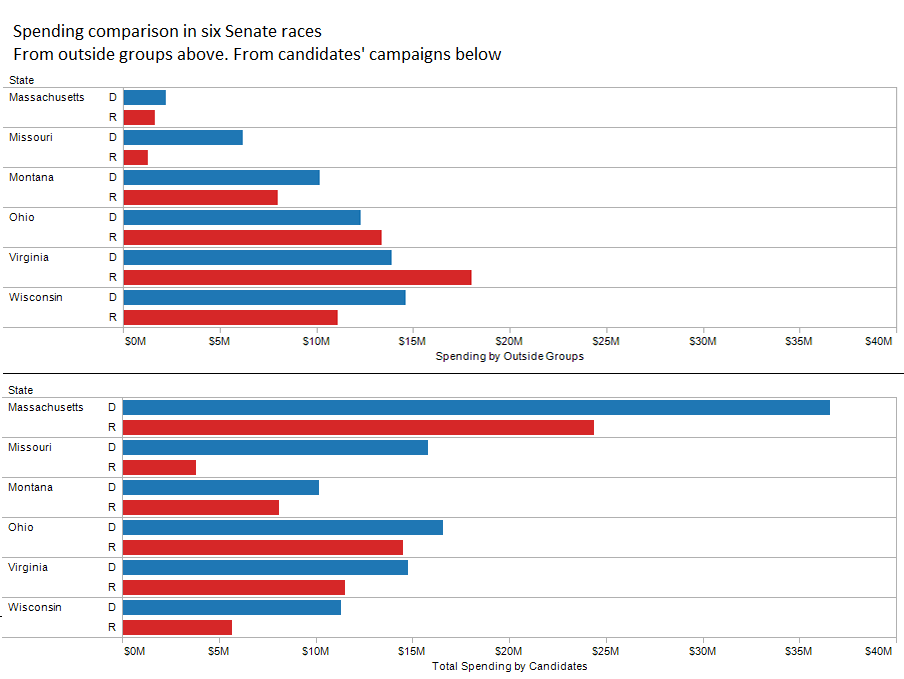 Posted by: Michelle Johnson on November 5, 2012