Transitioning From
Truck To Table

After months of hard work, Mei Mei is finally looking like a restaurant. Located in the Audubon Circle neighborhood of Fenway, near Boston University’s South Campus, the small, bright space is covered in exposed brick and a decorated chalkboard menu. Re-purposed bottles of craft beer serve as napkin and chopstick holders. Egg colored seats mimic Mei Mei Street Kitchen, the food truck that started it all. There is still no permanent sign outside, yet customers flock to the spot anyway. The Li siblings—Margaret, Irene, and Andrew—are busy getting ready for the evening’s first dinner service. There’s no downtime when running a restaurant.

From its humble beginnings feeding hungry blue-collar workers, the food truck has blossomed into an American food institution. According to the research firm IBISWorld, food trucks and carts grew 8.4 percent from 2007 to 2012 and now make up a $1 billion industry.

Coast to coast, food trucks have revolutionized the food scene in the U.S. In Portland, Ore., the food trucks have eclipsed much of the downtown area, occupying both sidewalks and parks. With help from Twitter and Facebook, anyone can find where their favorite gourmet truck will be at any moment and receive up-to-the-minute updates on specials, new menu items and location changes.

“Food trucks offer a few things that traditional catering cannot: variety, accessibility and affordability in a fast-casual environment,” says Ryan Carlin of Roaming Hunger, a website that lists street food vendors in 35 cities across the U.S.

Yet the trend is now shifting to brick-and-mortar, as more food trucks are opening their own restaurants. In Boston, no fewer than five trucks have transformed from truck to table in the past year. Mei Mei Street Kitchen is one truck that’s made a successful transition. With extreme weather conditions, several city regulations, and unforeseen expenses, it’s becoming clearer why Boston food trucks are opening brick-and-mortars.

“Trucks are good way to get a business started but they’re not so good for long run,” commented Patrick Lynch, who co-owns the popular Boston truck Bon Me with his wife Ali. In February, they opened their standing restaurant in Kendall Square. 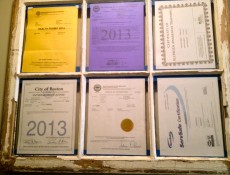 Mei Mei Street Kitchen is a fellow truck that has grown from four wheels to full-blown establishment. In just a year and a half, they became the darling of the Boston food truck scene. Their concept of re-imagined Chinese-American fare has gained a cult following—even famed London chef Yottam Ottolenghi sang their praises. The most popular item on the menu is the Double Awesome: sharp Cabot cheddar, local greens pesto, and a poached egg wrapped up in a crispy scallion pancake, the golden yolk slowing oozing out.

Mei, which means little sister in Chinese, is the brainchild of the Li siblings and began as a way to combine all their skills—food management, business, and creativity. Andrew, a former manager at the Cambridge restaurant Harvest, began the business with sisters Irene, who handles the food, and Margaret, who deals with the business and social media. Committed to sustainability, pasture-raised meats, and local produce, the Li’s fresh and inventive cuisine is street food heaven. But running a food truck proved harder than imagined.

“Not only are [commercial kitchens] very expensive, it’s not your kitchen or your equipment. It’s like sharing a dorm,” said Kim.

In a city that often gets below freezing, running a food truck can be a daunting experience. When Nemo hit earlier this year, several trucks including Mei Mei Street Kitchen banded together to shovel snow off the streets so they could park their trucks.

“Weather was a big part of [opening a restaurant] – food trucks are very much a seasonal business, and we wanted something more consistent,” said James DiSabatino of Roxy’s Grilled Cheese, which will open a restaurant in late January.

For Mei Mei, having pipes freeze meant no running water, which caused the truck to shut down almost immediately. “The truck has a tendency to get much sicker [than us]” said Kim. As another brutal winter approaches, many food trucks in Boston have made the choice to close for the season.

Yet one of the most surprising challenges of running a food truck is the regulations. Food trucks in Boston have as much, if not more, regulations than a restaurant. No less than eight different permits are required, including a health permit and public site license. Boston City Hall’s guide to starting a food truck is nine long pages of information, checklists, and costs.

“There seems to be little urgency on the state’s behalf,” acknowledges Kim, as he sips tea from a plastic container.

Despite these many setbacks, food truck owners are happy to have started off on four wheels. “Trucks are core part of who we are. Our identity is based on trucks,” said Lynch.

Grateful to have started a truck before a restaurant, Kim says, “[Me Mei] was able to gather and build an amazing staff. They’re probably the brightest star we have. We also got to see what [food] items were popular. Now we have become much more fluent in learning about our capacities.”

The benefits of food trucks continue to appeal. Starting expenses, including everything from food to propane, typically run from $40,000 to $150,000, while a restaurant can cost $200,000 and up. The lower price tag of a food truck has a large allure for entrepreneurs starting from the bottom. With the flexibility to try new menu items and find new potential customers, trucks make a smooth transition into the culinary scene. Additionally, moving from location to location means continuous roving advertising.

Patrick Lynch says Bon Me always had a restaurant in mind, but wanted to start a food truck to become familiarized with the food industry. Now with three trucks and a restaurant, Bon Me is experiencing a steady growth. Speaking of opening a brick-and-mortar, he says, “restaurants are more difficult upfront because you’re more concerned with a location.” He points out that it is up to the community to approve a new restaurant. He says that the logical avenue to a open second truck is the more prevalent trend.

Back at Mei Mei, the collective atmosphere of the staff is joyous. After eight months of tearing down the former Giga’s pizza, the Mei Mei employees—most of whom had no previous restaurant experience—are happy in their new, permanent home. Aside from the steep stairs, which connect the main restaurant to the commissary. Mei Mei employee Chris says during a busy service, running up and down stairs can prove a bit problematic. “You don’t take it seriously until you crash into someone,” she notes half-jokingly. Excluding that minor struggle, the new restaurant feels homey and warm. With help from Kickstarter, Mei Mei raised more than $36,000, surpassing their goal of $28,000 to jump-start the new venture.

Boston’s strong sense of community has helped Mei Mei along the way, including the support from local chefs and restaurateurs whom Kim calls “not competitive but very supportive.” Adding to the love from the community, he notes that some people traveled to be at the restaurant’s opening in November.

Despite an increasing trend in brick-and-mortars, there is no reason to fret—food trucks aren’t going away any time soon. Brett Burmeister, managing editor and co-owner Food Carts Portland, a website dedicated to Portland’s many trucks, is confident in the lasting power of mobile eateries.

“The truck revolution of the last five years has shown the masses you can get excellent cuisine out of a mobile truck. The roach coaches of previous decades have gone the way of the dodo bird.”