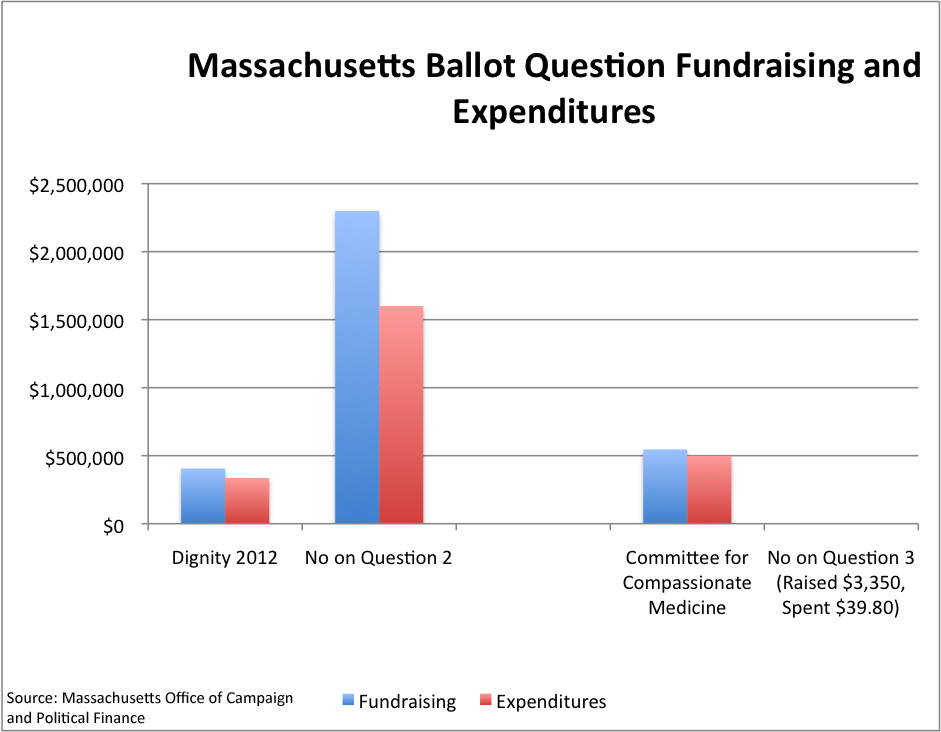 The simple rule of ballot issue campaigns comes down to this: The deeper the pockets and the higher the financial stakes, the louder the buzz.

A 2006 ballot question on the sale of beer and wine in food stores saw the two combatants, liquor store owners and food store chains, spend a total of $11 million on campaigns that included a non-stop stream of television ads.

Dignity 2012, the group sponsoring Question 2 to legalize doctor assisted-suicide for terminally-ill patients, has raised over $400,000 since the beginning of the year – most of it coming from groups in Washington state and Oregon.

The two groups opposing the question raised a combined $2.3 million during the same period – most of it coming from Catholic organizations.

Maurice Cunningham, an associate professor of political science at the UMass-Boston, said the contrast illustrates the change in ballot referendum campaigns over the years.

Originally seen as a way to put power back into the hands of the people, Cunningham says the ballot referendum process has fallen under the influence of deep-pocketed interest groups.

“More recently, ballot questions have been subject to big dollar battles between interest groups, or in some, with only one interest group pounding away,” he said.

The recent history of Massachusetts ballot questions would seem to back Cunningham’s point.

In 2010, the liquor and housing industries each provided over $1 million to fund successful campaigns to roll back sales tax on alcoholic beverages and to maintain a law that reduced local control over the construction of low-cost housing.

In another issue, teachers unions and the Service Employees International Union (SEIU) supported the victorious campaign to keep the state sales tax at 6.25 percent.

In 2006, in addition to the wine and beer question, which was defeated, groups fighting over an initiative to give collective bargaining rights to child care providers also raised over $1 million, most of it from the SEIU.

Among the similarities between the successful fundraisers in 2010 and 2006 was the ability to tap into large, established interest groups for big donations.

This year’s social issues bear more of a resemblance to the campaigns in 2008 over the decriminalization of small amounts of marijuana and a ban on dog racing. None of the groups supporting or opposing those questions were able to surpass the $1 million mark.

This November’s campaigns haven’t raised significant amounts of money from individuals. Big money came from Catholic groups and pro-assisted suicide organizations. Nearly all the money for the medical marijuana campaign has come from one person, Peter Lewis, the chairman of Progressive Insurance.

Lewis, a well-known benefactor of the movement to legalize marijuana, contributed $497,000 to the Committee for Compassionate Medicine in 2012. The amount is over 90 percent of their total donations for the year.