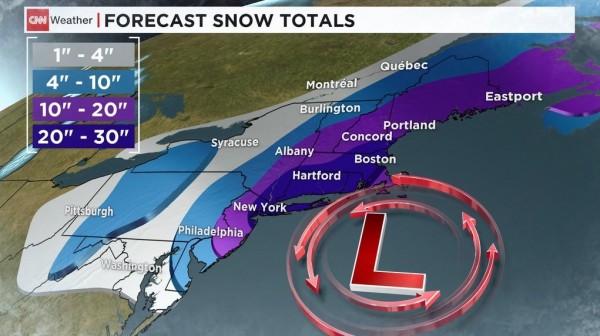 Governor Charlie Baker has declared a state of emergency and banded travel on roads in Massachusetts tonight in the wake of a potentially historic storm that forecasters predict could drop 2-to-3 feet of snow on the area along with hurricane-force winds.

“We are urging all Boston residents to take the storm very seriously,” Walsh said.”Stay off the roads as much as possible.”

Cars left on major roadways in the city will be towed. The MBTA has announced service suspension for Tuesday and late Monday evening. Boston Public Schools will be closed Tuesday and Wednesday. Thousands of flights in and out of Logan airport have been canceled through Wednesday.

Blizzard and winter storm warnings have been issued from Maryland through Maine and into Canada. Up to 58 million people could be put into the deep freeze.

Check back for updates on the storm by BU News Service. (Graphic: CNN)