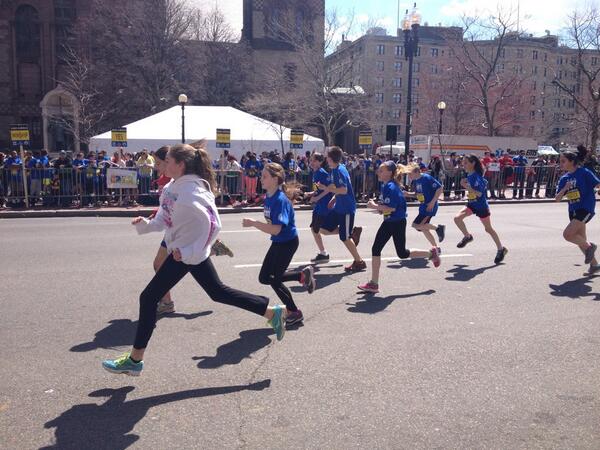 More than a year ago, the finish line of the Boston Marathon, located on Boylston Street between Dartmouth Street and Exeter Street, was the scene of explosions, chaos and blood when shrapnel from two pressure cooker bombs tore through the legs of runners and bystanders resulting in hundreds of injuries, dozens of amputations and three deaths.

On Saturday, two days before the 118th Boston Marathon, more than 8,600 runners crossed that same finish line to complete the 2014 Boston Athletic Association 5K. Among those who ran were about 100 students from nine high schools in the Boston area who are training for a marathon themselves, the Cox Providence Marathon on May 4, in Rhode Island—they are too young to run Boston.

“Most of our kids could barely ever run a mile other than the mile you run at phys ed,” Jamie Chaloff, founder and director of Dreamfar High School Marathon, said in October, before training had begun.

Chaloff worked in special needs education before starting Dreamfar six years ago. She runs the organization out of her house, just like she had with Purple Cow Pre-School years ago. A purple cow figurine still sits on a shelf as soon as you enter her Chestnut Hill house coming through the basement. Chaloff wears feathers in her highlighted brown hair to appear more approachable to the students, she said. And she paints her nails orange, a Dreamfar color, with 26.2 written in her thumbnail for motivation.

“We were looking for the kids that sort of fall through the cracks at school,” Chaloff said. “The honors kids have their honors classes and their AP classes and the athletes have their sports and have their teams. But there are a bunch of kids in high schools that just don’t connect to anybody and connectedness is just so important. If every student has someone to connect to, an adult in the high school, it just makes their entire high school experience that much easier.”

Fatima Ezzahra El Krimi, 15, from Morocco, arrived in America in March 2013. “I don’t miss it,” said Fatima in a telephone interview. She joined Dreamfar because she wanted a physical activity to replace soccer, which she hasn’t had much opportunity to play here.

“I love running,” said Fatima, who didn’t know any English when she arrived in America. She taught herself by watching the news and looking up words on her computer during class. “I want to prepare now to run in the Boston Marathon. Mr. Bob really supports me a lot.”

“Mr. Bob” is Bob Aftosmes-Tobio, Fatima’s running mentor and algebra teacher at Mary Lyon Pilot High School. His wife, Alyssa, is also a mentor and project manager at Harvard’s School of Public Health. The couple combined their last names (Bob Tobio and Alyssa Aftosmes) when they got married, and they are among some other Dreamfar mentors running the Boston Marathon.

Bob wears glasses and has a beard and long brown hair that he puts in a ponytail. Alyssa has short red hair that sweeps across her head from left to right. They live in a sea-green two-story house in Roxbury, which they have been renovating. Furniture is scattered around the house and blue painting tape hugs most of the corners of the walls. A Dreamfar poster leans against the wall just inside the front door. They sit next to each other on a beige couch in the middle of the room in their Boston Marathon jackets from last year.

“Fatima is perfect for the program,” Bob Aftosmes-Tobio said. “She never really talks as much as she talks when she’s running with Alyssa.”

“Oh gosh, no, I think, ‘No I can’t do it,’” Fatima Ezzahra El Krimi said. “But they say, ‘No Fatima you’re gonna do it, just keep running.’ And I just keep running because I want to do it.”

If you just push Ezzahra El Krimi a little, she responds, Alyssa Aftosmes-Tobio said. “I’m excited for her to finish.”

For Bob and Alyssa Aftosmes-Tobio, finishing the Boston Marathon might mean healing a year-old wound. Last year was supposed to be their first marathon together—then tragedy struck. They were on Beacon Street less than two miles from the finish line when the bombs exploded.

“The realization that we were not going to finish was too much,” Alyssa Aftosmes-Tobio said. “I just stood there crying until Bob said, ‘We gotta go, we have to find out where we need to be.’ Thinking back it seems selfish to think that I just couldn’t believe that we weren’t going to finish.”

One of the worst feelings, Bob Aftosmes-Tobio said, was facing the confused spectators and runners looking to them for answers, some following the couple back to their hotel room. It was only once they got to the hotel room and turned on the news that they knew what had happened.

“Who would ever want to hurt runners?” Alyssa Aftosmes-Tobio said she remembers thinking.

“To finish a marathon is like the like step one of healing, I guess,” Bob Aftosmes-Tobio said.

Disclosure note: The author of this article has agreed to film the organization’s activities for use in a promotional video.