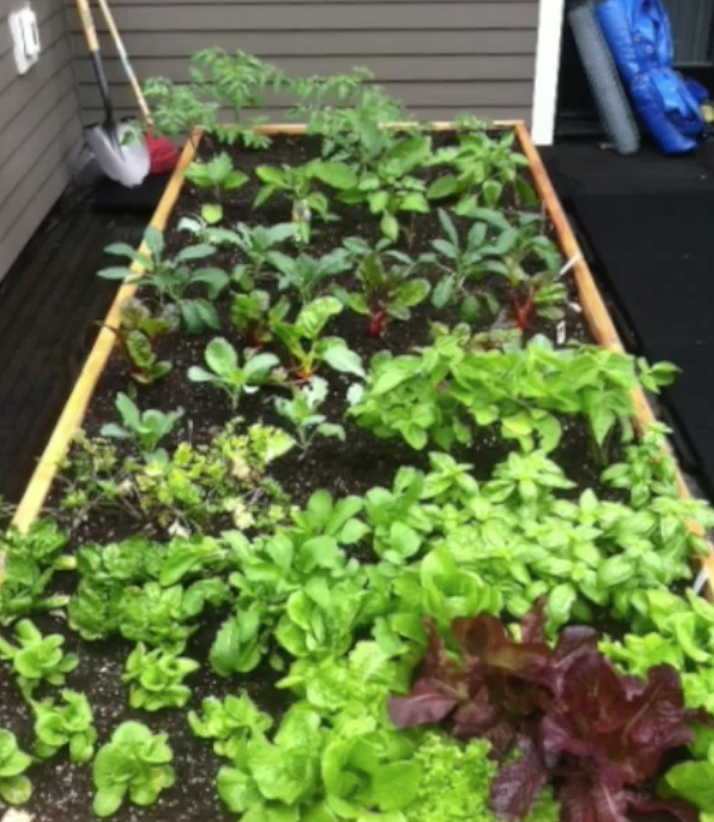 “Rhubarb,” said Derrell, a UMass Boston student and planting veteran of the group that day.

Derrell and Llaquelin, both members of local nonprofit, Groundwork, Somerville’s Green Team, argued over which chard variety to plant in the last tray- only to put the decision to a vote. The Green Team is Groundwork’s youth employment program, where teens receive compensation while working on environmental projects. Llaquelin said she comes to the Groundwork office after school on Mondays, Wednesdays and Fridays, where she can see the Rhubarb Chard they planted (it won by default – there were only a few seeds left in the Rainbow Mix packets) begin to sprout indoors for a few more weeks. Soon, however, her afternoons will be spent outdoors at Groundwork’s South Street Farm.

The farm, which was dubbed Somerville’s first urban farm at its opening in April of 2012, doesn’t look like much right now. A loitering winter has produced a 4,000-square foot landscape of weathered raised beds and frozen soil. But, don’t let the appearance of a barren lot fool you. In a few months’ time these same beds will be overflowing with organically-grown fresh lettuce, broccoli, tomatoes, peas, beans, husk cherries, green onions, and herbs like mint and cilantro. There will be edible nasturtium flowers, known for their peppery taste. There will be rows of bright sunflowers.

Some volunteers aren’t only gearing up for farm work at South Street – they’ll be doing the same in the yards of their own homes. When the Boston Zoning Commission approved codes for urban agriculture in the city for the first time back in December, Groundwork Somerville’s Executive Director, Chris Mancini, said his first reaction was that Somerville, the most densely populated city in New England, would have to start sharing its pride by encouraging residential farming in urban spaces.

“We can’t brag that we’re the only city that has it anymore,” Mancini said light-heartedly during an interview at the Groundwork office.

Mancini was referring to the ordinance on urban agriculture that was approved by Somerville’s Board of Aldermen and Board of Health in September of 2012, more than a year before former Mayor Menino signed off on Boston’s legislation. The ordinance, which was the first on urban agriculture in Massachusetts, outlined rules for the keeping of chickens and honeybees and farming on one’s property.

Mancini and Kristin DelViscio, Groundwork’s Green Team Coordinator, realize that Somerville might not be a competitor when contrasted with a large city like Boston with its seemingly endless resources towards tech innovations and social entrepreneurship ventures.

“They have a lot of community gardens and urban gardening sites,” said DelViscio.

Mancini argued, though, that Groundwork’s South Street farm can be a model for those in the region who are interested in farming but don’t quite have the level of capital to build a rooftop greenhouse or install hydroponic trays.

“It’s a good example of how to do things in a lower tech, more affordable way,” he said.

Because Groundwork was already capable of selling its produce-and does so at local farmer’s markets-the new ordinance didn’t have a direct impact on the organization; but, the intent of the legislation is in line with the nonprofit’s long-term goals.

“It helps us in that it increases growing space and green spaces in the city,” Mancini said. “So maybe someone will de-pave a driveway and have a garden or farm now.”

Another environmentally focused group is helping Somerville residents to do just that.

Green City Growers (GCG), an urban garden installation business, partnered with City Hall last year to start the Urban Agriculture Ambassadors program, which was funded by the Mayor’s Office. The pilot program provided agricultural training to 16 residents last spring, spread over four weekends at the GCG office in Union Square. There participants learned how to control garden pests and build raised beds. These ambassadors then spent at least 30 hours volunteering at one of eight garden sites. One of the sites that participants could be assigned to was Groundwork Somerville. Resident Abe Gore got partnered with the non-profit after completing his training.

“Abe did the ambassador program, he was assigned to our site, he volunteered all through the summer, and now he has his own farm,” said Mancini.

To be more precise, Gore isn’t calling his back deck a “farm,” exactly. He said he would use the term “intensive gardening” to more correctly describe his set-up.

Just a couple months after completing the ambassador program, Gore and his wife incorporated a 10-foot-long raised bed into the layout of their second floor back deck. They planted a variety of vegetables, and while Gore said he is hoping for a better crop of tomatoes and eggplants this year by keeping a close eye on pH levels, the leafy greens like lettuce, kale, and Swiss chard all grew well last summer. He said the success was due to little things he learned from Green City Growers, like knowing the best position for plants to receive sunlight when you live in a densely populated area.

“I didn’t really appreciate just how challenging gardening in an urban environment was until they really spelled it out.”

After his positive experience with the program, Green City Growers asked Gore to join the steering committee for this year’s ambassador program. Gore then helped in choosing the new set of participants, who are already three weeks into their classes.

Gore said that during the last harvesting season he and his wife consumed all the vegetables that grew out on their deck. So as of yet, he hasn’t taken on the role of produce seller and leaves that to the Whatley-based Enterprise Farms and Groundwork Somerville, which sell the fruits of Llaquelin’s and Derrell’s labor at the Somerville Mobile Farmer’s Market. You might even find both Rhubarb and Rainbow Mix chard.