Bee is for Boston 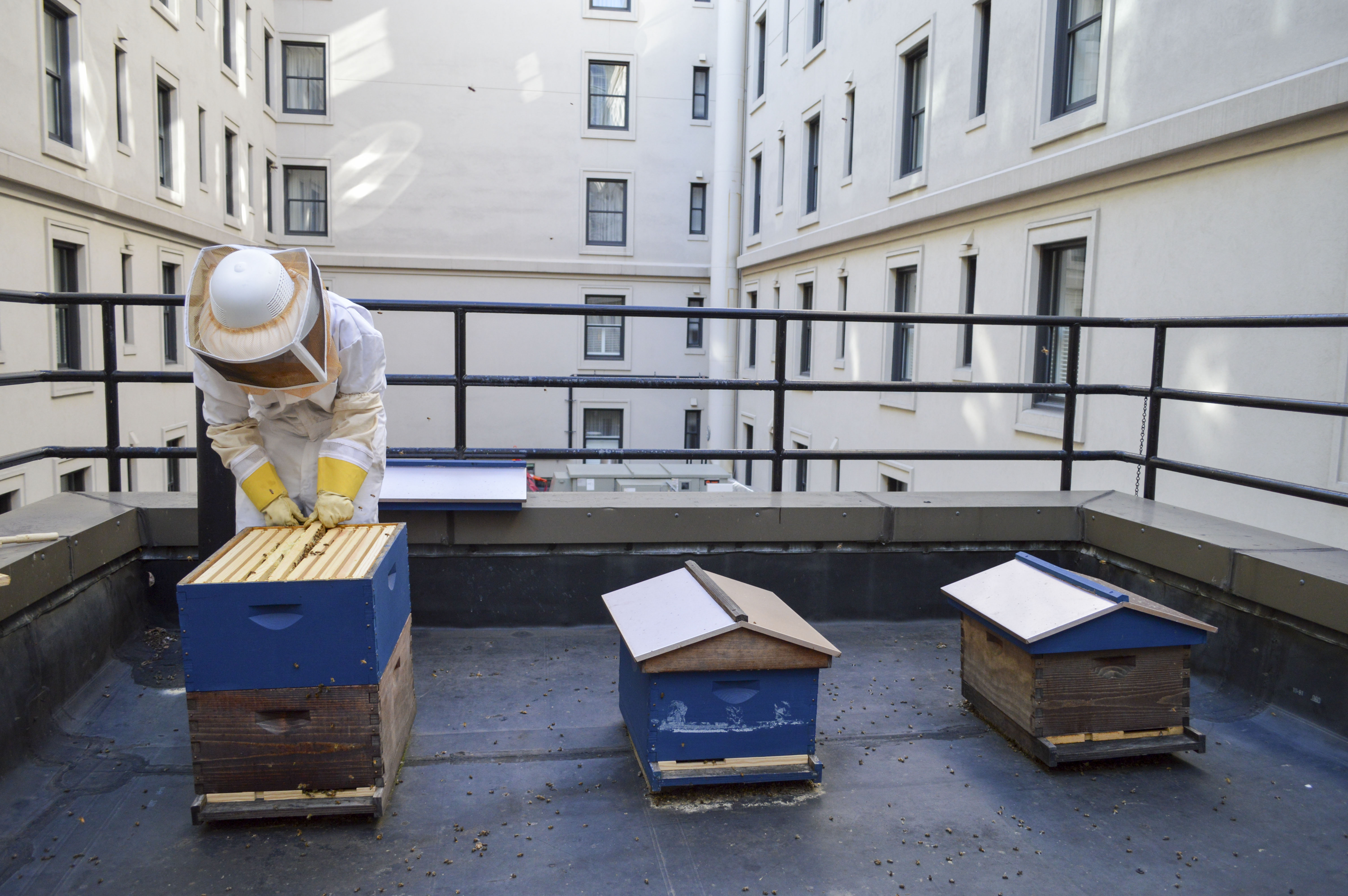 Boston’s Copley Square is the epitome of urban life. Surrounded by towering skyscrapers, people mull about the streets, shop in popular stores, take pictures in front of the Boston Public Library, and people-watch on the grass in the center of the square. But hiding in the midst of this metropolis are colonies of honeybees.

The hives nestled on the rooftop of the Fairmont Copley Hotel belong to a growing trend in big cities such as Houston, San Francisco, and New York. For the past few years, restaurants and hotels ranging from fashionable boutiques to large chains have joined individual city-dwellers in the beekeeping craze. In Boston, at least four restaurants and hotels are raising bees and harvesting honey.

Nationwide, the rise in urban beekeeping can be attributed to the “locavore” movement sweeping the country. People want to know where their food comes from, even if that means growing it themselves. When community and rooftop gardens took root in Boston, urban bees soon followed. After all, plants need pollinators and bees are the most efficient. Yet despite people’s excitement, a mysterious disorder threatens this phenomenon.

Noah Wilson-Rich, a behavioral ecologist and entrepreneur, is emblematic of an innovative and environmentally friendly generation. An expert in bee health, he saw an opportunity to bolster urban beekeeping in Boston and couldn’t resist. In 2010, Wilson-Rich founded Boston’s Best Bees, a beekeeping-consulting firm that’s responsible for over 200 hives in the city, including the apiaries in many bee-friendly restaurants such as The Fairmont Copley Hotel’s Long Oak Bar and Kitchen and The Gallows. Other establishments include The Seaport Hotel and The Taj Hotel.

“Most restaurants and hotels are changing their focus from imported exotic foods to more of a farm to table, local, organic, sustainable cuisine,” said Jessica Tardiff, Fairmont Copley’s sales manager and beekeeper. Last year with the help of Boston’s Best Bees, the Fairmont Copley installed three apiaries, which produced 150 pounds of honey its first season. Most of the honey goes to the restaurant for making honey butter, bread, and turkey brine, or is served during high tea.

This year however, the apiaries only produced 50 pounds of honey. “One of our queens died halfway through our season and one of our hives isn’t that strong,” said Tardiff. “The hives weren’t unhealthy, so we don’t know for sure what’s going on but we think it may have to do with Colony Collapse Disorder.”

In 2006, reports of honeybee disappearances began trickling in. Since then, the decline of bees has increased, which scientists are attributing to Colony Collapse Disorder (CCD), in which entire colonies disappear. Researchers estimate that approximately one-third of the world’s bee population has succumbed to the disorder. This is troubling because bees are responsible for pollinating one-third of the food we eat including over 130 fruit and vegetable crops, according the U.S. Department of Agriculture.

The cause of CCD continues to elude researchers, but they speculate it’s a combination of factors including pesticides, disease, and climate change. While CCD affects bees that pollinate industrial crops most, urban bees are also susceptible. Harvard University Environmental Biologist Alex Lu believes certain pesticides, which compromise bees’ immune systems and leaves them vulnerable to pathogens such as mites and fungus, are the primary cause of CCD. “[The pesticides] are everywhere including residential areas,” said Lu.

One motivation for many restaurants maintaining hives is boosting suffering bee populations said Tardiff. Although urban bees fare better than their rural counterparts (62.5 percent vs. 40 percent survival rate), experts still worry. “Beekeeping in an urban setting is a good way to raise awareness,” said Lu. “But a handful of bee colonies don’t help the whole population.” If people really want to make a difference, he suggests lobbying congress to ban pesticides linked to CCD—something European nations like Great Britain have already done.