Running After Recovery, A Woman’s Goal to Cross the Finish Line 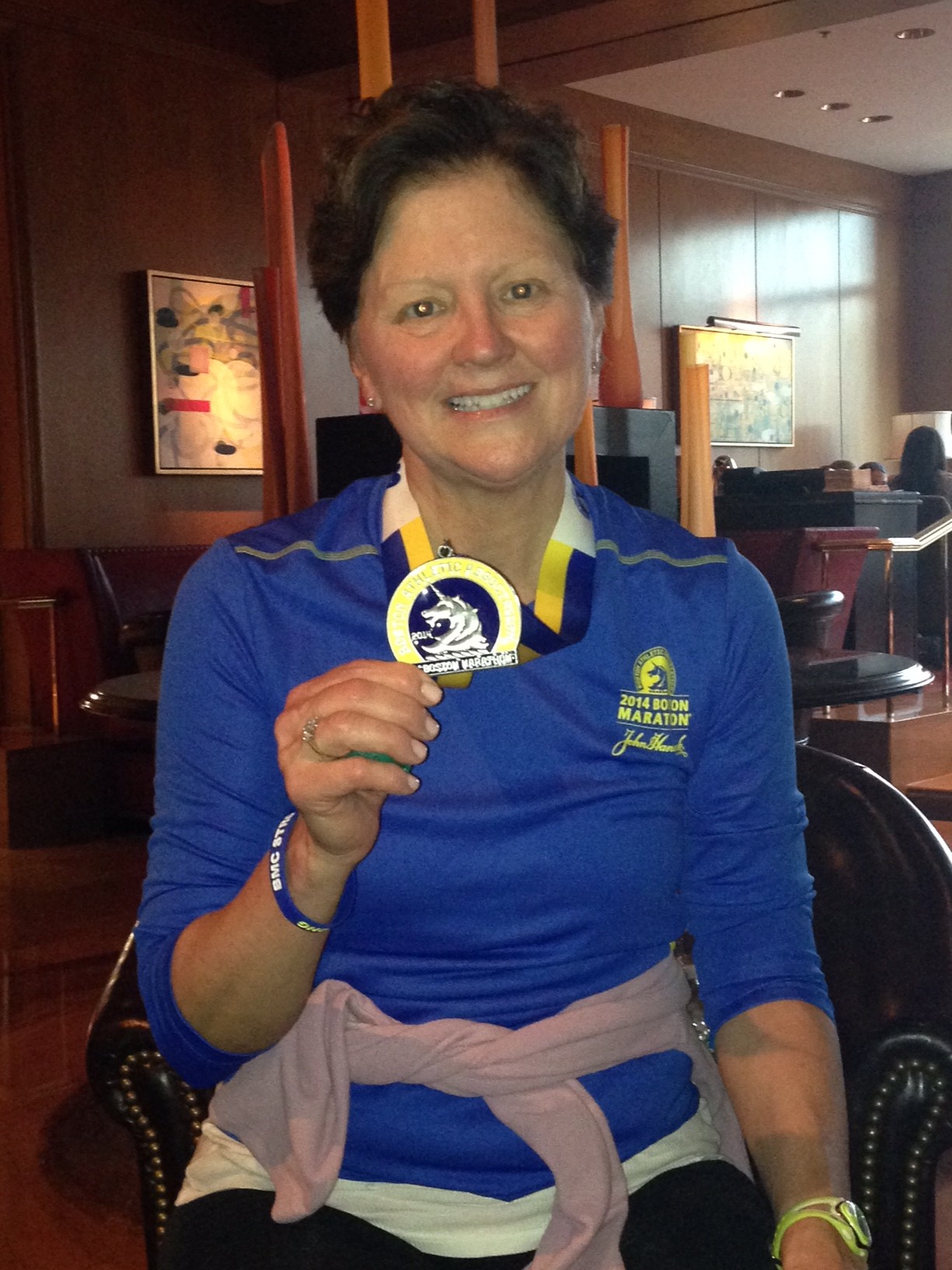 On Monday morning, Dr. Judy Lytle laced up her black-and-pink Adidas running shoes and lined up at mile zero in Hopkinton. Having met up with fellow runners on the Boston Medical Center marathon team, at 11:25 a.m. Lytle began her 26.2-mile trek to the finish line.

Just over one year ago, the starting line of the Boston Marathon was the last place anyone would have imagined Lytle being.

In December of 2012, Lytle was just one month into her dramatic chemotherapy for acute promyelocytic leukemia. The 56-year-old primary care physician for Boston Medical Center was diagnosed with the blood cancer just one month earlier. The treatment left her confined to the hospital during the month of December and, after that, required her to return to the hospital for treatment daily for another two and a half months. During the month that Lytle was confined to her hospital bed, running her first ever Boston Marathon became her seemingly impossible goal.

“Running the marathon seemed like a high-in-the-sky thing to hold onto while I was so confined,” said Lytle, a petite woman with brown eyes and hair and a modest demeanor.

Lytle said she doesn’t know how or even why the Boston Marathon came up that day in her hospital room, but once she made the decision to cross the finish line on Boylston Street in April of 2014, her whole family resolved to help make it possible.

“Running the marathon was talking big from my bedside,” Lytle said. “I said, ‘I’m going to run the marathon next year.’ A few of my family members signed on at that time.”

Lytle got the news that her leukemia treatment was successful in June of 2013, just eight months after the diagnosis. Not long after, Lytle, her daughter Julia and her son Joe began their training.

Julia Lytle, a Boston University senior, started training with her mom in August.

“[The family] is running for my mom,” she said. “And she’s actually running it, which is amazing.”

Although Julia Lytle decided not to run the marathon as a result of tendentious in her foot, Lytle is thankful that Julia supported her throughout her training.

“I kind of envisioned she and I would literally run the marathon together,” Lytle said. “Julia and I were much more at the same pace than my son.”

When Lytle began training for the marathon, making it past the first two miles was her first struggle. She started gaining mileage by running in intervals, walking for four minutes and running for one minute.  She says that some days were more difficult than others, but over time she built up her stamina.

“I kept saying I was going to do it but the reality of doing it kind of unfolded over time.”

“I signed up for the BMC team and it turns out their money is going to the emergency room,” she said. “It’s going to benefit everybody.”

Ultimately, running the marathon not only allowed her to raise $10,000 for Boston Medical Center, it enabled her to begin healing after the fight she endured with leukemia.

“I feel like preparing for the marathon has been my mechanism in which I have gotten back to feeling healthy again,” Lytle said.

However, Lytle did not consider completing the marathon as a triumph or an awe-inspiring event. She views it as just another connecting factor that has allowed her family to come together more deeply over the last year.

“The family support, to me, that’s what it’s all about,” Lytle said.

While Lytle was in the hospital fighting leukemia, her family helped her to get through each day by simply being by her bedside. Her brother and sister would come and spend weekends with her, and her husband, daughter and son were nearly always present.

“I don’t wish [leukemia] on anyone and I don’t really want to do it again, but it didn’t seem that bad because there was always somebody there,” she said.

On Monday, after running for five hours, 45 minutes and 47 seconds, Lytle crossed the finish line at 5:17:27 p.m., surrounded by her family.

Afterward, she said there’s only one reason she would do it again.

“The reason I would want to do it again will be to do it with Julia,” she said. “If it’s something she wants to do, I will do it in support of her. But I probably will move onto something else.”