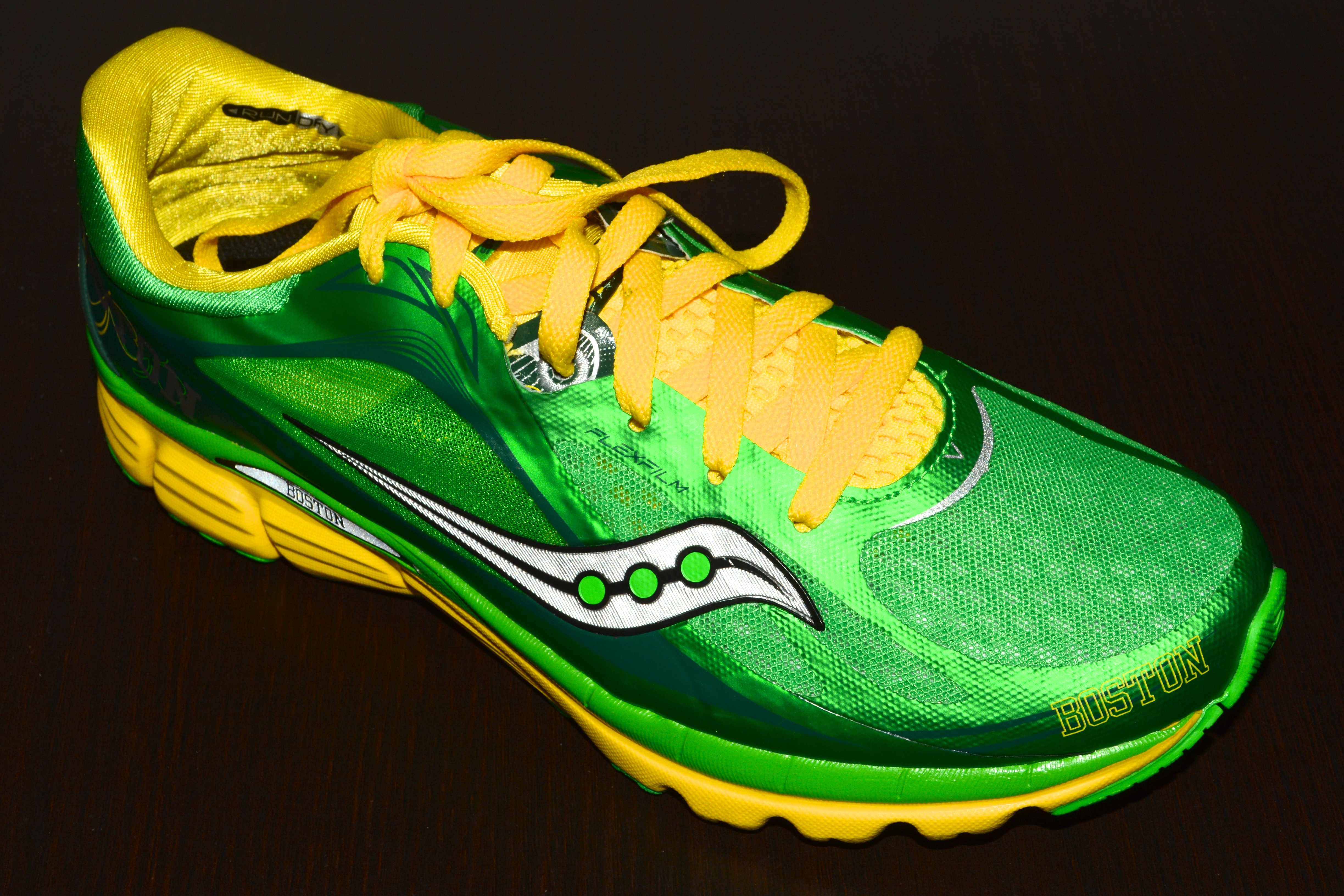 BOSTON–Even though is was a blistery, yet warm, Monday night and exactly one week before the 2014 Boston Marathon, runners were partying on Boylston Street.

Saucony and the Marathon Sports store rolled out the green carpet to welcome the fortunate few who managed to snag a pair of the Kinvara 5 Boston Edition running shoes. Just a few feet away from the legendary race’s finish line, a line of runners formed within the Marathon Sports store’s compact space to pick up their pair of limited edition running gear that was available for pre-order on Marathon Sports’ website. Once they picked up their shoes,
runners walked a few blocks down Boylston Street to the Back Bay Social Club where they mingled with other Kinvaraphiles while enjoying cocktails and appetizers in the restaurant’s event space. Some guests were festively dressed in St. Patrick’s Day attire, while one couple walked around in green and yellow feather boas.

The footwear they were celebrating is unabashedly unique, much like the city it commemorates. Named after a small seaside village in Ireland, the shoe’s bright green and gold color scheme with shamrocks and “Boston” emblazoned across the sides and back oozes Irish pride and makes sure that its proud owner will be seen.

One of those people will be Dorchester resident, Alyssa Quattropani. With her black athletic jacket, neon-yellow t-shirt, and yoga pants, Quattropani looked ready to jump into her new shoes and take off at that very moment. Her brunette hair was pulled back by a ponytail and secured with a thin headband that read ‘13.1 Once Upon a Run,’ Quattropani said that she now owns all five versions of the ultra-lightweight Kinvara shoe. When asked why she decided to buy the limited edition shoes, Quattropani, who is running the Boston 5K this Saturday and hopes to run the Boston Half Marathon, said that she has always worn Saucony shoes so when a pair in honor of her hometown became available, she could not pass up the opportunity.

As excited as Quattropani was to get home, open her box, and see her shoes for the first time, she was even more excited to transfer the metal clip that read Boston Strong from the laces of the Kinvara 4s she was wearing to her new kicks.

The bright green 2014 running shoes are the fifth generation in the Kinvara collection, but only the third Boston Edition. According to Saucony General Manager of Apparel Todd Dalhausser, who was at the release party, the Lexington-based company sold 340 pairs of shoes within 48 hours, and that 130 of those pairs of shoes were picked up last night at the party. The rest of the pre-ordered shoes will be shipped to their owners. The general public will be able to purchase a pair through Saucony starting April 18th.

Dalhausser emphasized that Saucony did not produce a limited edition shoe because of the tragic events of last year’s Boston Marathon. “The community of runners is tight,” said Dalhausser and the latest edition is a way of celebrating that community and the city which has always been site of the unveiling of all new Kinvara designs. Saucony. All proceeds from this year’s limited edition Kinvara shoes will be donated to The One Fund.