OPINION: Syracuse’s Struggles Will Haunt Them in March Madness 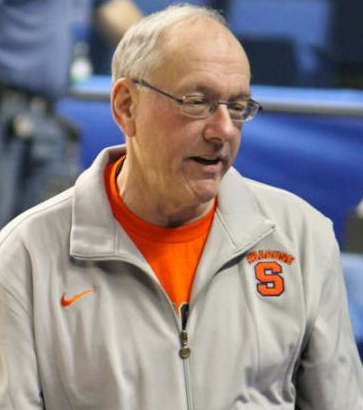 After winning their first 25 games, the Syracuse Orange are finally showing their true colors. They have lost three of their last four games and are spiraling down at the worst time. In college basketball, March means tournament time and with the Orange struggling now, it could mean an early exit in the NCAA tournament this year.

This year’s team is very reminiscent to last year’s which thrived in the tournament and reached the Final Four. They also lost three of four regular season games entering last March but were able to come together at tournament time. The team had leaders such as Michael Carter-Williams and Brandon Triche that helped the team peak at the right time. After blowing a 17-point lead against Louisville in the Big East Tournament Championship game, they played smart and great defense which led them to the Final Four.

This year’s team had much more to lose however from their late season struggles. The 2013-14 Orange spent four weeks atop the AP rankings and were expected to have a lock for a number one seed in the NCAA tournament.

After consecutive buzzer beater wins against Pittsburgh and North Carolina State, Syracuse finally surrendered their first loss of the season. The loss came at home against Boston College, a team that won just six games prior to this season. After that came Duke’s redemption win in Cameron. That game was by far Syracuse’s best performance in the month of February though it came in a loss. The same however cannot be said about Jim Boeheim who lost his cool, and almost his jacket, when he got thrown out after a controversial charge call against his team. The call nullified the game-tying shot with under a minute left and Boeheim’s ejection called for a double technical and Duke was able to shoot four free throws to put the game away.

Their next game was a two-point win at Maryland. Their last game on Saturday was their third loss of the season when they got demolished by ACC champion Virginia. The game threw away any hopes of a regular season conference championship for the Orange, who are in their first year in the ACC. The conference is one of the hardest in all of college basketball but after the 25-0 start, Syracuse is far from perfect.

The bad stretch has likely cost the Orange a number one seed in the NCAA tournament as they have fallen to 7th in the AP rankings. Their only hope of returning to a top seed would be to win the ACC tournament. That is unlikely however with Virginia and Duke playing their best basketball as of late and Syracuse on the downward spiral.

That perfect start seems like it was years ago when you watch Syracuse play now but perhaps this is who they were all along. Boeheim’s 2-3 zone defense is his calling card and this year’s team is no different. That has not changed even in this string of losses. The defense gives up an average of just over 59 points per game throughout the season. In their three losses, they have given up an average of 67 points per game, which though is considerably higher, is still a respectable defense.

The problem is on the other side of the ball. Even when things were going well for Syracuse, their offense was averaging just 68 points per game which ranks 254th in the country. In the three losses however, they have averaged just 58 points. That is why this Syracuse team will continue to struggle. Defense can win games for you more often than not, but come playoffs, good teams score. If your defense is off for one night, you’ll need to rely on scoring to bail you out. This Syracuse team just doesn’t have that.

With a problem like lack of scoring, even the 9th ranked defense in the country will struggle in March.  Syracuse’s true colors have been shown and they cannot change who they are now. With most Hall-of-Fame coaches having their teams peak come tournament time, Boeheim’s teams seem to do the exact opposite year after year.