Rucking On: Military Men and Women Walk 26.2 Miles for the Fallen 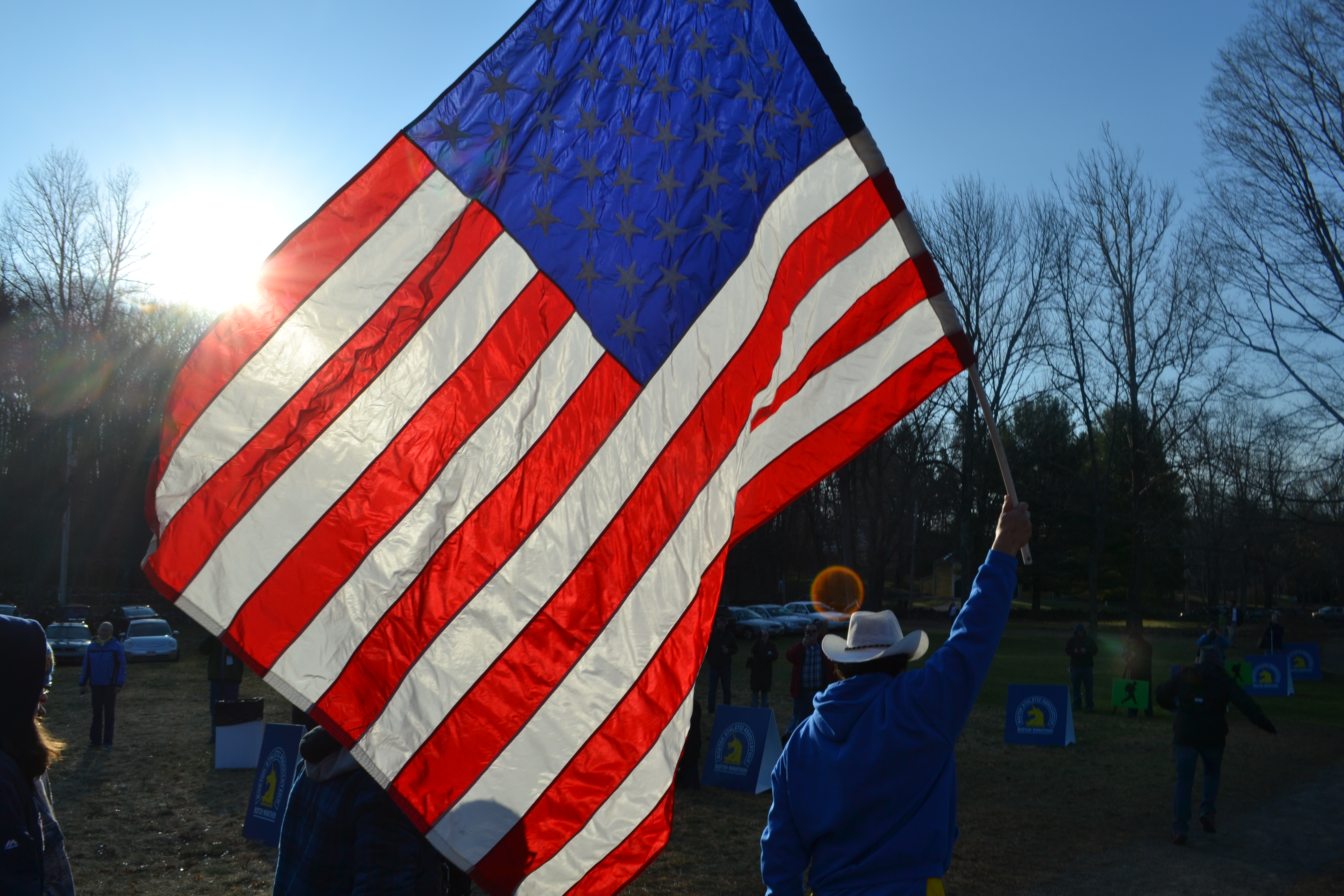 It was 6 a.m. on Patriot’s Day in Concord, Mass. The ground was soft, moist and covered in dead leaves. The sky was still dark as the moon hid beneath cloud cover. In the distance across a small bridge, the boom of several cannons infiltrated the early morning air.

After the cannons ceased, the strains of the National Anthem could be heard in the distance, barely audible over the chatter of hundreds of military men and women preparing to “ruck,” or walk with a rucksack, 26.2 miles for fallen soldiers. The “ruckers,”as they call themselves, were missing the annual dawn salute at Minutemen National Park to recognize the opening battle of the American Revolution.

First Lt. Steve Fiola of the National Guard, from Fall River, Mass., stood nearest to the dawn salute, and seemed to hear the anthem immediately. He turned around and faced the waving flag in the distance—the voices of the ruckers drowning out the tune. Without a sound, Fiola turned and glanced back at the chatting men and women. One by one, the ruckers went quiet and raised their hands in salute. The historic  American Revolutionary battlefield went quiet—all was still except for the sounds of the Star-Spangled Banner.

Men and women in the military have been rucking the Boston Marathon for years, and this is the first time they would not be included on the traditional route. At the end of February, the Boston Athletic Association, or B.A.A., which oversees the race, announced that due to heightened security this year, no backpacks would be allowed during the race.

Fiola and his team had less than 40 days to put together a new event.

Fiola had walked last year’s Boston Marathon, crossing the finish line only about 30 minutes before the bombs went off, running straight toward the explosions without thinking twice. This year, he and the others would not be able to participate, all because of their rucksacks.

“Everyone wanted me to stand up on a building and bang my chest like a baboon to petition,” Fiola said. “It is just a waste of time and it is irrelevant to the cause, which is putting on a rucksack and paying tribute to our fallen.”

Walking the marathon without their backpacks was not an option for Fiola, who created the “Tough Ruck” group after the 2012 marathon in order to unite all military ruckers under the same cause and name, after seeing countless groups ruck separately.

Last year they had about 30 military men and woman march under the Tough Ruck name. They now have more than 1,000 members in the group all over the country, and though they did not all show up yesterday,  more than 400 people registered for Saturday’s ruck.

“The rucksack is the embodiment of what we need to live,” Fiola said. “We put that on for our fallen brothers and sisters. We ruck, because they can’t.”

On this cold, mid-April Saturday morning, the ruckers were transported by bus from the parking lot to the white tented check-in table, which was staffed by volunteers—family members or friends of those who were there to walk, and also of the fallen.

The ruckers stood around in groups chatting, stretching, eating, or drinking energy drinks to prepare for the approximately six- to eight-hour walks ahead of them.

Nolan Calamia, of the Army Reserve, originally from Long Island, New York, was standing alone with his rucksack by his side after check in. He raised $410 that will be donated to the Military Friends Foundation, which provides for families who have lost a loved one in the military, where all of the money raised at the Tough Ruck will go.

“Personally we didn’t lose anyone,” Calamia said. “I am marching for two firefighters. If they hadn’t been there, then I wouldn’t have my uncle.”

Fiola was ever-present around the group before the walk, thanking higher-ranking staff for coming, answering phone calls from lost drivers, and talking with his own mother, who was volunteering.

He is the only child of a single mom, and grew up with few luxuries. But this was never an excuse to slack off for Fiola, he said.

He enlisted in the National Guard in 1998 when he was 17 years old, going away to basic training before his senior year of high school.

He remained in the service for 12-and a-half years, when he decided he wanted to have a bigger impact on the military.

“I got tired of commanders who were making decisions that were disconnected from decisions soldiers were expecting,” Fiola said. “So, I went through accelerated office candidate program through Alabama Military Academy in 2010 and then went to Fort Lee for a basic transportation officer course in 2011.”

Though he already has two bachelors’ degrees, Fiola is now enrolled in a doctoral program is studying leadership psychology.

“A big problem in the National Guard is suicide,” he said. “How do we fix that? I am trying to help distinguish between people who lead and people who are leaders.”

As ruckers approached the check-in table, they received long yellow ribbons to attach to their rucksacks. Some had one, others had five or six, but they all had fallen soldiers’ names hand written on them in black pen.

As it got closer to 7 a.m., Fiola, who wears glasses and has a soft, approachable face, got up in front of the ruckers. He led the group through a moment of silence to honor fallen brothers and sisters.

“The importance of being on this ground is profound,” Fiola said to the group. “This is where it started. You are going to be on land where the regulars in the militia, the blacksmiths and the farmers, they literally died right here fighting for our freedom.”

The ruckers this year left the check-in tent and headed down a sidewalk into the town of Concord. They then departed the town and traveled onto the Battle Road Trail through Minutemen National Park, where they would do four laps—each 5.5 miles. After their last lap, they would continue back into Concord toward the race start.

There would be two water stops: Meriam’s Corner and Fiske Hill.

All of the men and woman lined up at the start with rucksacks on, most weighing around 40 pounds.

Fiola said his rucksack usually contains an extra uniform, cold or wet weather gear, extra socks, a medical kit, boots, water, food, granola bars, sustaining-type food, extra t-shirts, an ice pack or two (not for injury, but for hot days), face cloths and a wool blanket or sleeping bag. It weighs about 37 pounds without water, but more than 40 once water is added.

Fiola walked to the front of the pack, but it was not he who would be starting the ruck—it was the “cowboy hat hero,” or Carlos Arredondo, a Costa Rican native who wore a cowboy hat, a blue-and-yellow Boston Strong sweatshirt and carried a large American flag on a pole.

Arredondo became famous last year from the iconic photo of him helping Jeff Bauman, who lost both of his legs in the Marathon bombings. Last year, Arredondo had been at the finish line as a Tough Ruck volunteer. He lost his own two military sons—one in Iraq in 2004, another committed suicide in 2011.

Saturday, he carried a much larger flag whose colors shone vibrantly against the early morning sun.

As they headed into the town of Concord, spirits were high and the ruckers stuck in groups. Though Fiola said they would not walk together the whole race, he started the ruck with Mark Welch, also in the National Guard, who was one of the first responders to the Marathon last year.

Welch said he followed Fiola’s lead to the finish line last April. Welch, shorter than Fiola, but with a larger-than-life, outgoing personality, rucked for SFC Michael J. Squillaci, his very first squad leader out of basic training. Squillaci died in 2013 of an apparent suicide.

Maureen O’Boyle, of Lynnfield, Mass., was left standing alone after everyone had passed through the town. She had an orange Tough Ruck volunteer shirt on and pinned on her left side was a picture of her son, Kevin James O’Boyle. He died this past August after serving two tours in Afghanistan.

“It is a shame they can’t hear the cheering crowds,” O’Boyle said in reference to the usually loud Boston Marathon route. Much of the Tough Ruck route would be silent.

“Only 24 more to go,” Welch yelled as he passed through Meriam’s Corner, two miles into the ruck. “Hurry up!”

Fiola quietly passed at a steady pace with a big grin, giving high fives to volunteers.

“This is the finish line right?” another rucker said jokingly as he passed by the food and water table.

After more than seven miles of rucking in their military fatigues and boots, many of the ruckers changed their socks and took a small break at the second checkpoint, Fiske Hill.

An Army Ranger sat on the ground and took off his socks. His feet were red and blisters were starting to form. He lathered his feet in baby power, switched his socks and started back toward Meriam’s Corner.

Though the volunteers cheered on the runners at each of the checkpoints, the rest of the ruckers’ route, filled with switchbacks, hills and open space, lacked the typical Boston Marathon atmosphere.

After rucking back and forth for hours, just past 1 p.m. the start line was turned into a finish. BAA and Tough Ruck signs lined the path to the 26.2-mile mark. The BAA donated signs and medallions to give to the ruckers.

The men and women started to trickle in at around 1 p.m. and would continue over the next two to three hours.

Every rucker had a different reaction to finishing—some limped, others ran. One woman fell to her knees with joy and exhaustion, yelling “Yes!” and immediately bursting into tears.

Volunteers handed out custom BAA medallions for the ruckers—all of these volunteers were Gold Star families, meaning they had a family member give their life to service.

A mom chased a little girl in a white sweater with a large American flag on the front while girls in pink dresses high-fived the ruckers as they returned. Everyone cheered as soon as another rucker was spotted in the distance.

The wind blew, and planes from the nearby base thrummed overhead.

Last year at this time, Fiola, Welch and Bernard Madore, who was also at the Tough Ruck, left their ruckers and their rucksacks near the Boston Public Library and ran back toward the finish line of the Boston Marathon.

They tore down barriers made of steel, helped people out of bleachers and made tourniquets from ropes and belts.

“There were body parts and debris everywhere,” Fiola said.

This year as he crossed the finish line in Concord, Fiola high-fived and chatted with people he knew, picking up a little girl cheering for him. Before his boot hit the line, he put his hands in the air and did a little dance, swaying and shaking.

“I was trying to stay grounded,” Fiola said about last year and how he acted in front of the rest of the ruckers. “I don’t look at myself as being allowed to show fear or vulnerability because I have soldiers looking to me.”

He was able to walk straight to his car and take off his rucksack this year.

After walking 26.2 miles, Fiola did not have a drop of sweat on his face and did not break stride by limping.

“I’m tired, but I could still go,” Fiola said after he dropped off his rucksack, stretching his back. “I feel great. I got sore feet, but that’s par for the course.”