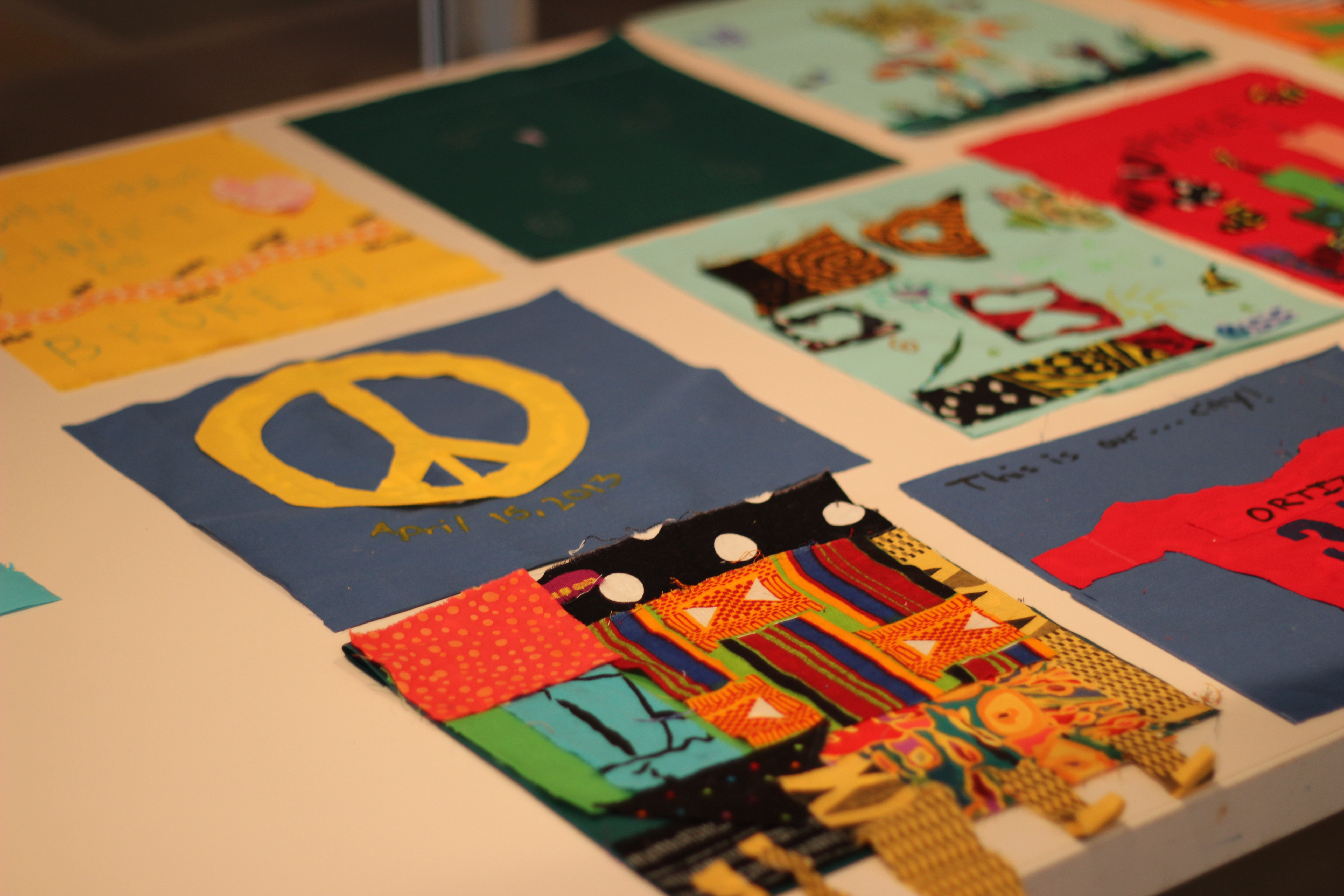 Clara Wainwright sat at one of the low standing tables of the Isabella Stewart Gardner Museum Education Studio. Behind her, in front of the windows, bright colored flags hung from string with phrases such as “hope,” “peace,” “love” and “Boston Strong.”

On the table in front of her lay a square green piece of fabric, the start of a Tibetan flag, which she had glued on smaller, cut out pieces of fabric. There were blue squares in the shape of a winding pathway, trees in the bottom right corner and a orange and blue pattern to the left.

“Proceed as the way opens,” Wainwright said she would be writing on her flag. “It’s good advice.”

For the last four Sundays, the Education Studio has been open to people of all ages to make their own Tibetan flag, dedicated to the upcoming anniversary of the 2013 Boston Marathon bombings. Today was the last day for the public to make the flags and thus far, 300 flags have been made. The museum plans on hanging them up in Evans Way Park by Friday.

We had a lot of people come in who were connected in some way or had friends or family who were injured,” said Johnetta Tinker, Director of Community Programs at the museum, behind a table covered in fabric scraps. “People have been so gracious.”

She said that she gave people the choice to take their flags home with them, but that everyone decided to leave their flag to be put up on display. Last week, 68 kids came from a nearby Tibetan Sunday school to make flags.

“It is important because it captures people’s hearts,” Tinker said. “I felt we should be a part of this marathon. When the prayer flags blow in the wind, it would blow throughout the universe. It is something to be hopeful for.”

Tinker had a box she flipped through of finished flags and said that everyone has their own message and style they want to convey.

“The idea of Tibetans is they hang flags in high places so wind can pick them up and carry prayers all over the world,” Wainwright said. “Last Sunday when the Tibetans came, it was wall to wall, the kids were so quiet and went right to work.”

She said she talked to one of the teenagers about the silence in the room and why there was no fighting or bickering. He responded: “That’s the way we were raised.”

Wainwright and Perkins are both quilt makers and this is not their first art project commemorating the 2013 marathon.

The two women have both been featured in the Boston Globe and on WBUR for their project, Mending Boston, a 13 by 5 foot fabric display in which they went to sites around the city and had Bostonians “mend and talk about the marathon.”

The four corners of the fabric were used to remember the four people who were killed and there is a yellow strip down the middle to symbolize the marathon route. People could mend whatever they wanted to the quilt, but Wainwright preferred that it be something positive. It was on display at MIT for a while, but is now at Spaulding Rehabilitation Hospital in Charlestown, where many of the marathon bombing victims went for treatment.

“I was following Clara’s lead,” Perkins said, regarding both the Mending Boston and the Tibetan flags. “It was just amazing to hear different people’s stories. It is amazing what happens when people are quite and are working together – people’s inhibitions are dropped.”

Munjeet and Perry Geyer brought their two daughters to the museum to decorate the flags. The girls have been to the museum before and love to come.

“We are making flags because it’s almost the anniversary for the Boston Marathon,” the Geyer’s older daughter said.

Munjeet Geyer said that they live only a few blocks from where the bombs went off last April.

“Art gets them to think about what they are doing,” Munjeet Geyer said. “It helps them understand and they know they are doing something nice.”

The younger Geyer daughter decorated her flag with sunshine, flowers, hearts and the words, “have a nice day!”

Mitzi Marsh, who was working at the table with Wainwright, said that Wainwright sent an email to all of the people who had worked on Mending Boston to go to the Stewart Gardner to help on this project as well. Marsh and Wainwright have been friends since they were young girls.

Marsh’s daughter-in-law was injured when running the marathon last year and was in the hospital for five days, but has now recovered.

“I feel like I am contributing to those who were injured,” Marsh said while gluing fabric shaped like flower petals on to her flag. “Anything you can do to up spirit in Boston is fun and satisfying.”

Look for the hundreds of flags to be on display by then end of the week in front of the Isabella Stewart Gardner Museum in Evans Way Park.