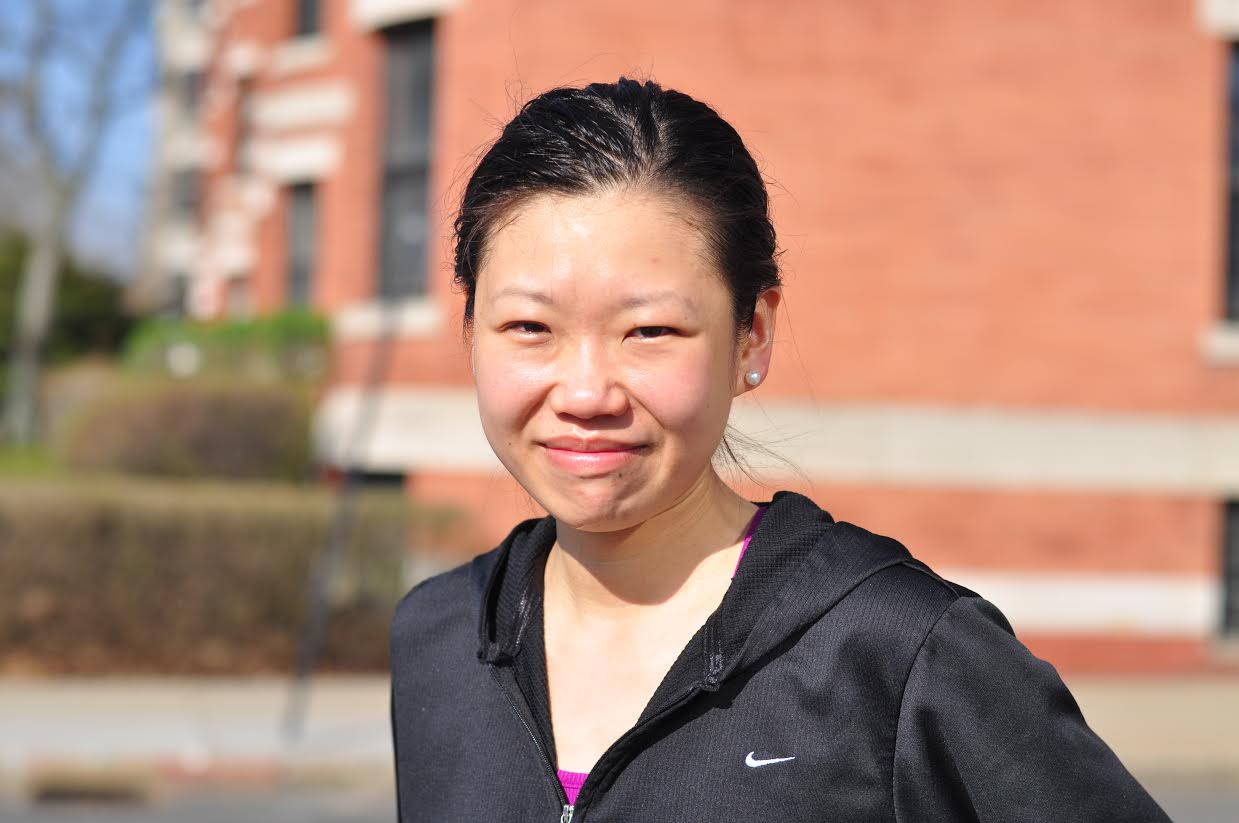 On a rainy Tuesday night, Shuheng Lin (GRS’16) started her daily training on the treadmill at the FitRec center. As one of seven people selected from the BU community, Lin will run this year’s 26.2-mile Boston Marathon on April 21, in honor of Lu Lingzi (GRS’13), one of the three victims of last year’s marathon bombings.

Lin,  a Ph.D student in  Economics, was working at her office during last year’s marathon, but she was following the race online.

She was shocked by the bombs and was even more astonished to find out Lingzi, a Chinese student at BU, was killed in the tragedy.

“I got to know her from her father’s eulogy,” said Lin. “And I have a lot of admiration for her. She had a passion for life, she excelled at school, and she was such a talented musician.”

They were both international students from China, studying in the same school, trying hard to adapt to a brand new culture here in the U.S.  Lin says the culture assimilation is long and challenging, which Lin says is a like  a marathon race.

When Lin saw the opportunity to run for Lu Lingzi on BU Today in early February, she signed up with no hesitation.

“A marathon race reminds me of my experiences in this country,” said Lin. “It allows me to come to terms with my limitations, and also cultivates tenacity and positive energy.”

Soon after BU and the Lu family announced which students were selected to run, Lin  and the six other runners started their marathon training.

Lin and the others were left with only 11 weeks before the marathon, compared to a typical 16-week training period.  Jennifer Carter-Battaglino (SED’03), is an instructor of a FitRec marathon training class and also one of the seven who will run  in Lingzi’s memory. She is helping the other runners with a personalized training schedule.

Lin has to run four days a week with a different training focus each day. She usually has a tempo run for six to eight miles on Monday, and adds two more miles on Tuesday’s medium-long run session. On Thursday, there’s a track workout.. Lin and the six other runners usually gather on Saturday for a long run ranging from 14 to 20 miles.

Lauren Ferraro, a nutritionist working at BU’s Sargent Nutrition  Center is offering a class focused on hydration and proper nutrition for distance runners. Lin and the other runners learned how to adjust to a healthy distance running status by managing their eating habits.

“There are people really running fast even in a long run like the marathon, but I’m not one of them,” said Lin, laughing. “I usually run 6 miles in one hour. And a 16-mile run usually takes me three hours.”

As a fifth year PhD student, Lin has a busy schedule preparing for her dissertation, usually staying at her office from 9 a.m. to 9 p.m.

After finishing her work at the office, she still has to go to the gym or run around the Charles River at night.  Lin has a pinched nerve in her back, which makes running more difficult. Before running on a track, she usually runs on the treadmill for 30 minutes, listening to her pace and making some adjustments accordingly. After the training, she needs to do some stretch exercise to prevent further injury.

Lin ran in the 2012 Chicago Marathon and she said it took her 5 hours to finish. Because the seven BU students  are running in honor of Lu Lingzi, they are exempt from needing a qualifying time.

On April 14, BU held a memorial service for Lu Lingzi at Marsh

Chapel. Lin joined the Lu family and Lingzi’s friends and she couldn’t stop her tears when listening to people talking about Lingzi in Chinese, which to Lin is not only her mother tongue but also a symbol of home.

“What I learned from that is we shouldn’t sink in the sadness anymore,” said Lin. “Instead, we have to carry on Lingzi’s spirit and keep moving on.”