Support From the Other Side: Double Amputee’s Foundation Aids Bombing Victims 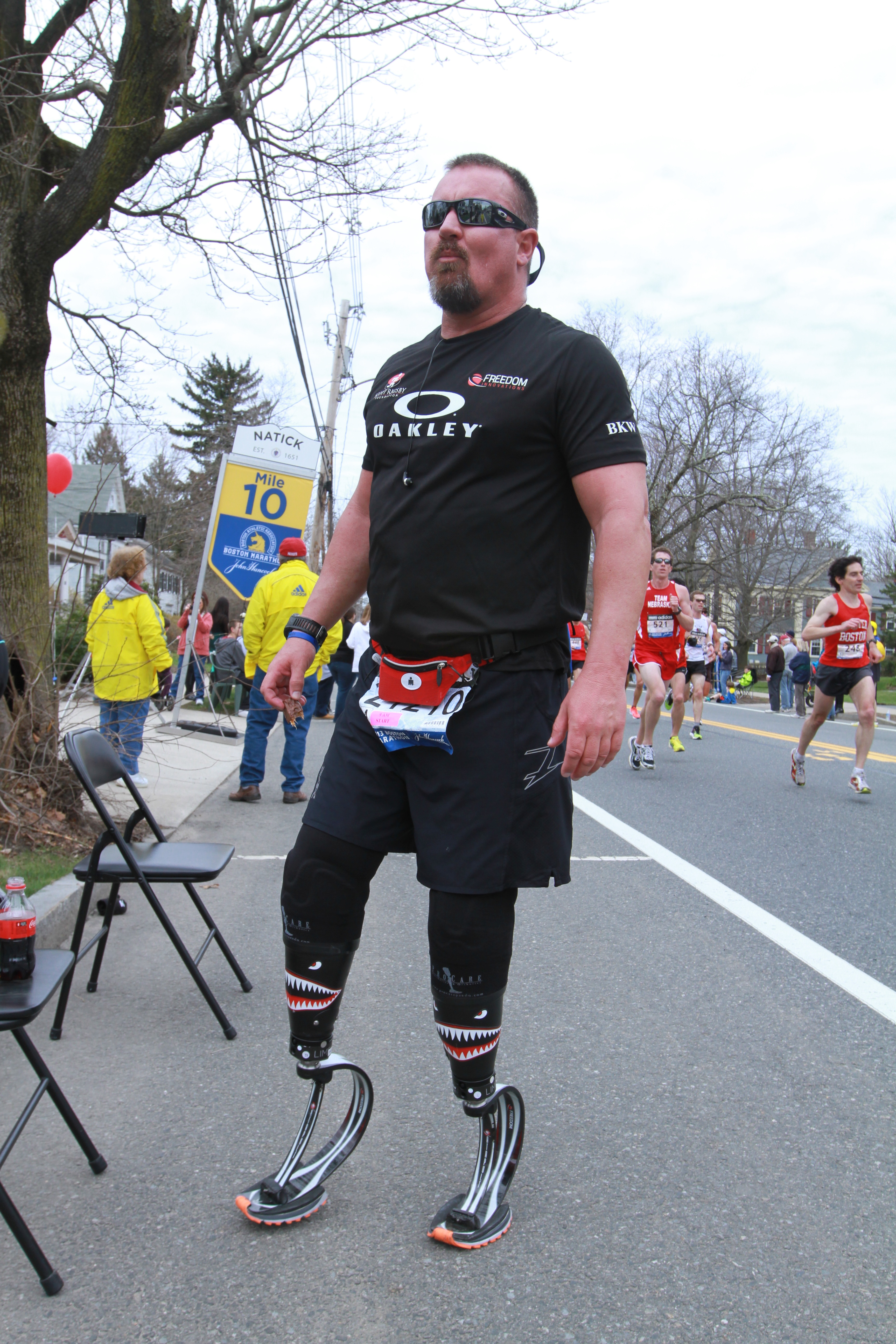 The 2013 Boston Marathon bombings left more than 275 people physically and emotionally scarred.  Runners and spectators alike found themselves rebuilding their lives and regaining their abilities one step at a time, oftentimes literally. Double amputee and two-time Ironman Scott Rigsby had already won that battle by the time he stepped onto the course for the second time last year.  This year he’s back in Boston to tell the victims of the bombing and all other disadvantaged runners: “You can run.”

That was Rigsby’s message in Room 310 of the Hynes Convention Center on Friday, where he worked with the Athletes with Disabilities Clinic.  Sporting a neat beard and close-cropped hair, the barrel-chested Rigsby carried chairs and handed out flyers, bouncing around on two rods of black descending into attached sneakers.  They were his “walking” legs, markedly different from his mountain biking legs, road biking legs, aqua legs, and the arced running legs he will use for Monday’s marathon.

Hailing from Marietta, Georgia, Risgby lost both legs in a car accident when he was 18.  In 2007, after 20 years of struggle to overcome his disability, he became the first double amputee to complete the Hawaiian Ironman Triathalon.  Afterward, he founded the non-profit Scott Rigsby Foundation.

The foundation typically works with amputee veterans and the people who love them.  The foundation has hosted Warrior Family Retreats to offer counseling and community to military members and their families.  Rigsby said he believes that healing from accidents that result in loss of ability doesn’t just affect the victim, but all those who support them.  “We want to be able to heal families, heal communities, not just individuals,” he said.

This year, he used his foundation to campaign for victims of the bombing.  Rigsby said he raised more than $350,000 in a few months.  He donated a grant of $200,000 to the Spaulding Rehabilitation Center, which has provided aid for amputees from the bombing.

According to a March 17th press release from the foundation, “the grant will support Spaulding’s long-term care and research programs for the survivors who suffered loss of limb as a result of the 2013 Boston Marathon bombing. It will also enable the expansion of Spaulding’s Comprehensive Rehabilitation Unit, which will serve the hospital’s patient population for years to come.”  Part of that care will ensure adaptive equipment and sporting programs to those with disabilities.

Rigsby ran 25.7 miles of last year’s marathon before the bombs went off.  “I’ve always had a great deal of respect for the Boston Marathon,” he said.  He partially credits photo-hungry Boston University students for saving his life last year, stalling him long enough to avoid crossing the finish line at the time of the bombs.  Or worse, from being stuck in the medical tent tending to sore stumps when the bombs went off.

Laura Barnard, chief financial officer of Georgia-based Halpern’s Steak and Seafood Company, is a longtime running partner of Rigsby’s.  “He’s basically my kid’s uncle,” she said from the convention center, where she sat at Rigsby’s table. “He’s got all these families all over the country.” Barnard ran as a guide with Rigsby last year, helping him carry extra supplies and tending to his legs.  She looks forward to finishing the race this Monday.  “It’s really meaningful this year,” she said.

Rigsby is running this year’s marathon alongside three veterans with amputated limbs and Stephanie Freeman, a car wreck victim with a traumatic brain injury.  He’ll also support local teacher John Young, who hopes to be the first person with dwarfism to complete the race.

The Scott Rigsby Foundation plans to continue to grant funds to the Spaulding Rehabilitation Center in the future.  “I’m endeared to this city.  I have a fondness, a love,” said Rigsby.  “It’s a very special place to me.”