The Art Behind the Science 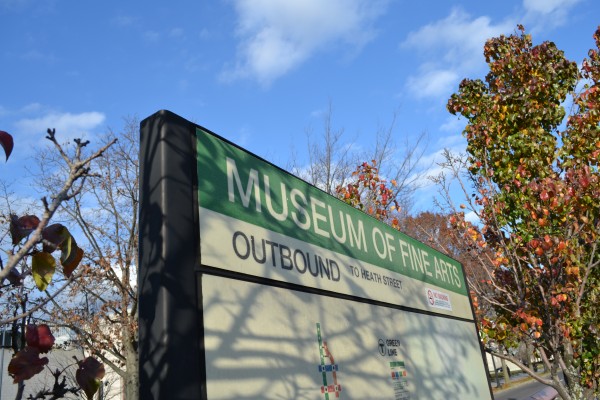 BOSTON — “I missed a meeting yesterday because I was just in the zone,” said Pam Hatchfield, Head of Objects Conservation at the Museum of Fine Arts, Boston as she reached for a brush.

She had on her lab coat, goggles, a mask and ear plugs as the laser heated up.  Large cotton swabs poked out of the top of the cup beside her.  Various chemicals sat next to the patient.  She grabbed her magnifying class and closely peered at the spot she would need to remove.

“Ok, here we go!” Hatchfield said. The patient, an ancient Etruscan sarcophagus, was still as she pressed the “on” button on her laser to begin her work.

Since 1887, two Etruscan sarcophagi have been on display at the MFA.  Each of the covers features a husband and wife in a loving embrace under sheets.  They are gazing into each other’s eyes and their arms are wrapped around one another, frozen in an eternal embrace.

This display of emotion, according to the MFA website, was rare in Greek culture but more common in Etruscan.

According to the Metropolitan Museum of Art in New York, the Etruscans, from a central region of Italy between the Arno and Tiber rivers, were influenced by Greek works until they were “subsumed into Roman culture” in 2nd century B.C.  Women were given more autonomy and a fairly equal role in this culture.

While the other sarcophagus, which is what Hatchfield worked on, is larger, made of limestone and contained the remains of their son and his wife, circa late 4th and early 3rd century B.C.E.  It has “silken surfaces and Grecian modeling,” according to Rowland.

“The most striking aspect of this extraordinary sarcophagus is, of course, the open eroticism of these two spouses who are also still lovers, physically beautiful, rich, and eager,” Rowland wrote.  “Husband and wife are certainly not resting.”

The sarcophagi’s sides contain detailed, deep reliefs filled with action and symbols – all the more reason for it’s cleaning.

In September 2011, the MFA created a program called Conservation in Action for the two sarcophagi.  Lasers would be used to clean dirt, dust and other elements off of the sarcophagi.

According to the MFA website, “Conservation work is normally conducted behind the scenes. However, given the size, weight, and fragility of these objects, a studio space was constructed around the sarcophagi in the gallery, allowing the public to see the treatment process from beginning to end.”

A glass wall surrounds the room where tourists, students, scholars, and visitors can view Hatchfield as she precisely points her laser at the stone.

At the start of my tour of the conservation area in the MFA basement, Hatchfield brought me to the objects conservation room.  She said there are three major areas in art conservation: art history, studio art and chemistry.

The room was white-walled with multiple tables filled with art spanning across different cultures and time periods.  A variety of gold musical instruments sat on the table next to us, waiting to be cleaned, with chemicals lined up next to them.  We sat on low standing stools, and she began speaking of the field in general.

Prevention, treatment plans, technical observation and authentication are all key components in a conservator’s day.

“It’s like combining the right and the left brain,” said Professor Larry Ziegler, a chemistry professor at Boston University, while sitting in is office.

Behind him, above his left shoulder, sitting on a shelf, was an unmoving clock that contained, instead of traditional numeric values, elements from the periodic table of elements.  Over his right shoulder, there were three paintings seemingly Asian in origin.

According to the Art Conservators Alliance, an organization that was founded in 2001, art conservation’s intent “is to improve the condition of an artifact by stabilizing physical condition problems and addressing surface disfigurement arising from deterioration and/or damage.”

Conservation is a science.

“We look at objects to see how they were made, what they are and how they might deteriorate,” Hatchfield said in the conservation room.  “Light levels, pollution, humidity, temperature levels – there is a whole research world that does experiments.”

Conservators are supposed to be generalists with the ability to deal with objects made up of metals, ceramics, glass, stone, wood, lacquer, ivory and synthetics.

Hatchfield went to the Conservation Center of the Institute of Fine Arts at New York University for graduate school, where she earned a Masters degree in Art History and a certification Masters in Conservation.

“We are supposed to be well-rounded,” Hatchfield said.  “But, we all have our particular areas we love.”

I asked Hatchfield what her personal favorite was.  She hesitated before she responded.

“I have many,” she said.  “But, I would say the ancient world – but don’t ask me to chose which one.  I have excavation experience in Egypt, so if I had to pick one – Egypt.”

We got up from our stools and I followed Hatchfield into the small objects laboratory.  Throughout the hallways, tall file cabinets lined the walls.  Each object needs extensive documentation and historiography.

The small objects laboratory is where Hatchfield has her office.  Bottles of chemicals, such as acetone and toluene, sat to the left of her desk.  A silver plate rested in the corner of the room, ready to be cleaned.  An object underneath a blanket was across the room.

“This is proved Renaissance,” she said.  “They thought it was a fake at the Harvard Fogg Art Museum.”

The object was found upside down in the dirt outside of a Medici Villa in Capannoli.  Hatchfield has been working on this now ongoing side project since the 1980s, trying to prove that this piece is, in fact, an original.  She has visited its find spot and performed many tests proving that, due to the degree of wear and materials used, this is a renaissance sculpture.

She immediately grabbed a lab coat, goggles and a mask.  She handed me a pair of goggles.

“You will need to put these on when the laser starts,” she said.

The laser, called a neodymium-doped yttrium aluminum garnet laser, started heating up and Hatchfield put earplugs in.  The sound the laser makes had made her ears ring the day before.

“The surface has already been cleaned once,” she said while looking for a piece of paper to show me.  “We got as much off as we could.  The laser has been removing a lot.”

According to Professor Ziegler, there are two major purposes to using a laser in art: cleaning and verification of chemical composition.

“A laser is a ubiquitous light source,” Professor Ziegler said.  “It is different than a conventional light source in that it is monochromatic and comes out in a single line.  It can be extremely intense.”

He said that a conventional light source is seen in 360 degrees, while a laser is focused in one specific spot.

“One purpose is to ablate direct away from the surface,” Ziegler said.  “Dirt has higher absorption.  It gets hot and causes it to weaken its attraction to the surface and comes off.”

According to e-Conservation Magazine, an online art conservation site, John Asmus, a Research Physicist at the Institute for Pure and Applied Physical Sciences at the University of California, San Diego, is considered the grandfather of laser art conservation.  He co-founded the Center for Art/Science studies at UCSD

In a book of technical summaries from the 2013 Optical Metrology conference in Berlin, Germany, a conference where scientists, engineers, researchers and product developers got together to discuss science and using light, Asmus presented a paper called, “Spin-offs from laser ablation in art conservation.”

“In this paper,” he wrote, “we trace the migration and adaptation of radiation divestment developments in art conservation to numerous applications in science, industry, and consumer products.”

The technologies he helped develop to use lasers in art conservation are now being used as precedent for other fields.

He calls these technology transfers, “Art in the service of science.”

The laser was still warming up.  Her goggles were on her head and her mask was around her neck.  Hatchfield uses the laser to remove dirt and dust from the sarcophagus.

Since her noise cancelling headphones were on, I raised my voice to ask Hatchfield how the fact that the MFA is a “fine arts museum” affects how they clean an object.

“We are very aware of these issues when treating objects,” Hatchfield said loudly.  “We often have to talk curator out of cleaning more than necessary.  We use the do not harm ethics of conservation.”

A fine arts museum, according to the Merriam-Webster Dictionary, is defined as, “a type of art that is done to create beautiful things.”  This is in opposition to college teaching museums that, according Forbes, “generate exhibitions, train student docents, host traveling exhibits and support different disciplines studied on campus.”

Campus teaching museums have the luxury of leaving pieces of art looking like they were naturally found without conservation or treatment.  It is a way for students to learn, while art at the MFA needs to look good, which can lead to disagreements with the conservator and curator.  Conservators do not want to clean too much, therefore ridding the object of part of its history.

“We research what materials to use,” Hatchfield said, “and do it in a way that someone somewhere could retreat that object.”

I asked Hatchfield what her favorite project that she has ever worked on was.

“You are like asking me to choose between my children,” she said.  “But, in terms of appreciation, this has got to be right up there.”

Hatchfield emphasized that every object she works with is different.

“You can’t make assumptions just because it’s a similar object,” she said.  “You have to assume it’s different and unique.”

When working on an object of this size, status and importance, Hatchfield gains an emotional, deeper connection than just merely a cleaning job.

“It’s an incredible privilege and honor to have my hand on an object like this,” she said.  “I know how difficult it was to make and how long it took.”

She put her goggles back on and her mask on her face.  The laser was ready.  She painted some water on the sarcophagus’s surface, a technique that helps to loosen up the dirt.

She grabbed the laser, a bent arm that protruded from a big off-white machine in the shape of a large cube with a screen to make power adjustments and specifications.  It made a loud buzzing noise.

She held the laser in her left hand like a dentist holds a probe.  In her right hand, she held a vacuum to pick off any dirt that was ablated from the object.  A small pinpoint of red light hit the exact spot of dirt she wanted to remove.

The laser began to click and, though my goggles, I could see the light begin to flash.  I stood up out of my chair to see that the spot where the laser hit had turned from dark grey to light brown instantly.

She moved the light over a very small fraction of the surface.  Slowly, meticulously, other small spots of dirt were vaporized.  A layer of dust, dirt and history were instantly evaporated away.  Her hand was perfectly still.  One wrong move could damage the surface.

She put the vacuum down and pointed the light in the other direction.

“So what else do you want to see me do?” Hatchfield asked me.

I looked down at my phone’s clock.

“Ah, well, you see, I forgot again!” she said as took off her goggles and turned the laser off.