Biking to a Beat 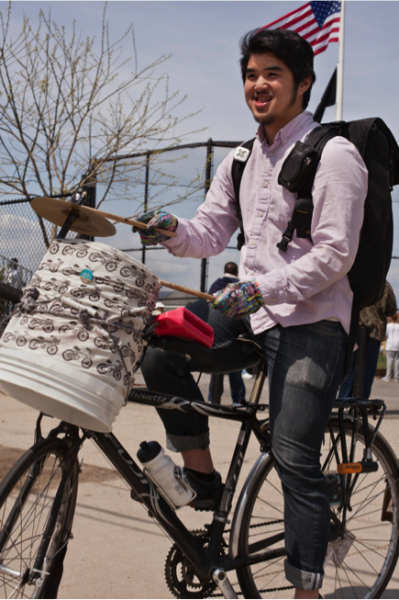 Greg Hum is hard to miss. His appearance isn’t out of the ordinary (he’s 5-foot-7’ with jagged, inky hair and a round, cherub-like mouth), but his preferred mode of transportation is.

At 8:30 a.m. on March 8, 2013, Hum ignored blizzard warnings and took to the streets on his bike. His 3-mile commute from Inman Square to the Boston University School of Management was a little more biting that day.  Passersby might have noticed him simply because he was one of the few to brave the snow, not to mention while riding his bike. But he was even more likely to draw attention on this particular commute because Hum was riding his drum bike, slapping sticks against plastic to break the morning tranquility.

Drum biking is pretty much what it sounds like—attaching some drum-like instrument to the handlebars of a bike and hitting it with drumsticks. It’s as rudimentary as that. Hum found his first drum, a 5-gallon plastic bucket, in the basement of his Boston University dorm.

There’s no established formula for creating a drum bike. Hum’s set is composed of an upside down plastic tub (which he regularly breaks through), a plastic woodblock, and a splash cymbal, all attached to his handlebars. He mentions that his friend and fellow drum biker, 28-year-old Galen Mook, sports a cowbell. The original Boston drum biker, Berklee College of Music student Joey Chang, was even showier. He included bells, whistles, a tambourine, and even flowers. Each drum kit is an expression of the person who created it.

“If I hit it in the middle, I get a nice boom, boom, boom,” Hum says, tapping his finger against his half-full plastic water cup.

He shifts his movement upwards to the lip of the cup, “If I hit the rim of it, it’s called a rim shot.

“And if I hit the side,” he says, quickening the beat, “I get a nice shallow sound.” With little focus, he’s tapping out a rhythm in time with unintentional foot twitching and the sound of the coffee shop’s laid-back alternative soundtrack.

The tradition of drum biking began in 2002, when Joey Chang, the original drum biker, attached an upturned plastic bucket to his handlebars. The inspiration came from the Downtown Crossing bucket drummers, who pound out beats on plastic buckets to the tune of contributions from onlookers. Hum, who’s been drumming since he was 10 years old, crafted his own drum bike in 2009 when he was a senior in college, just two years after he began biking in Boston.

Today, the nickname “Hum Drum” is slapped in loud black duct tape across Hum’s bucket drum. Despite the self-proclaimed nickname, he’s anything but dull. When he gets going about drum biking, his eyes focus intently and his hands flicker like fireworks.

In his early days, Hum drum-biked on a daily basis. No matter the weather. “I would be cracking up as I passed everyone on Commonwealth Avenue going to class,” he says with a toothy grin. “And then it would be over in a minute. But it made people smile, and I think that’s what kept me going.”

Hum’s known for causing a commotion on the street, but he’s been impacting Boston’s bike community in larger ways for years. In 2009, after discovering the convenience of bike transportation, Hum co-founded the Boston University Bikes Club. That same year he founded the Midnight Marathon Ride, in which a group of bikers rides the marathon route starting at midnight the night before. In four years, the event has grown to include more than 600 cyclists. The ride has become such an established tradition that the MBTA arranged for a special train to take participants to Hopkinton last year.

As a local bike advocate, Hum actively campaigns for safer streets. He attends the city’s bike department meetings and acts as a watchdog when he’s riding, documented by his YouTube videos of dangerous bike lanes. But on a more basic level, Hum is just trying to get a smile out of everyone.

“Music unexpectedly makes people happy,” he says. “I love music and I understand that music brings people together.”

He cites the most common reactions to his drum biking as smiling and laughing, but mentions that there have been a few extreme cases—both good and bad. He once incited a group of teenagers to dance across the street in Downtown Crossing by posting up on the sidewalk and rattling out a beat. Another time, in the South End, he inspired a much different reaction.

“This old man was hobbling across the crosswalk and wearing shades and a fedora,” Hum begins. “And he looks at my bike and he looks at the drum and he goes, ‘[Blankety-blank} Chinese,’ and just hobbled away.”

It’s hard to imagine a scenario in which someone would respond graciously to a racist comment, no matter how harmless. But Hum manages to find humor in everything. His rapid-fire laugh constantly rings throughout the café, much like the smell of coffee drifting in swirls out of mugs.

Hum’s passion for urban biking as both an alternative means of transportation and recreational hobby mirrors a general trend in Boston. With the installment of Hubway, a citywide bike share system, in 2011 and establishment of Mayor Thomas Menino’s Boston Bikes initiative in 2007, the city acknowledged a greater demand for attention to the bike community.

“Since we started the program, we’ve doubled ridership,” says Nicole Freedman, the director of Boston Bikes. “When the mayor launched the program it was really three initiatives and biking just sort of brought them together, making Boston a sustainable, economically-responsible, and healthy city.”

In September, the organization released the 2013 Cyclist Safety Report, in which it set a goal of decreasing bike crashes by 50 percent by 2020. The Boston Bike Network Plan, which established five and thirty-year goals for improving bike infrastructure, was released in conjunction with the report. By 2043, the group hopes to have installed 356 miles in a connected network, making biking in Boston more accessible to newcomers.

“We’ve put out a lot of surveys, and being willing to try biking really comes down to having welcoming levels of infrastructure,” Freedman explains. “What we’re doing as a city is addressing those concerns. Our primary goal is to make the city as safe as possible, so we’re adding bike lanes, cycle tracks, and bike paths.”

In addition to official efforts to make biking less intimidating to novices, there’s a tight-knit bike community, with people like Greg Hum paving the way for others.

When I tell him that I’ve recently begun biking, he responds with a genuine, “Welcome to the club, and congratulations,”  and then rattles off some useful information about the most dangerous streets in the city. It’s this warmth and obvious passion for biking that people see when he rides down Boston’s streets, making noise with a smile stretched across his face.

“No matter where you are, when people see me they say, ‘Only in Boston!’ or ‘Only in Brooklyn!’ or ‘That reminds me of San Francisco!’” he says with a now familiar laugh.

As he prepares to face the 30-degree chill of a December evening—Patagonia jacket zipped, gloves on, hat snug—he adds, “No matter where I am, I know music unexpectedly makes people happy, and that’s what I’m here for.”

With that, Hum hops on his Fuji Silhouette bike (his “favorite bike” according to a sticker plastered on the frame), and pedals down Commonwealth Avenue into the slush of recently melted snow.

You can be sure that wherever Greg Hum is, he’s cycling to the beat of his own drum.