David Carr speaks at The New School hours before his death. He spoke with Edward Snowden and Glenn Greenwald live about their Oscar-nominated film Citizenfour. 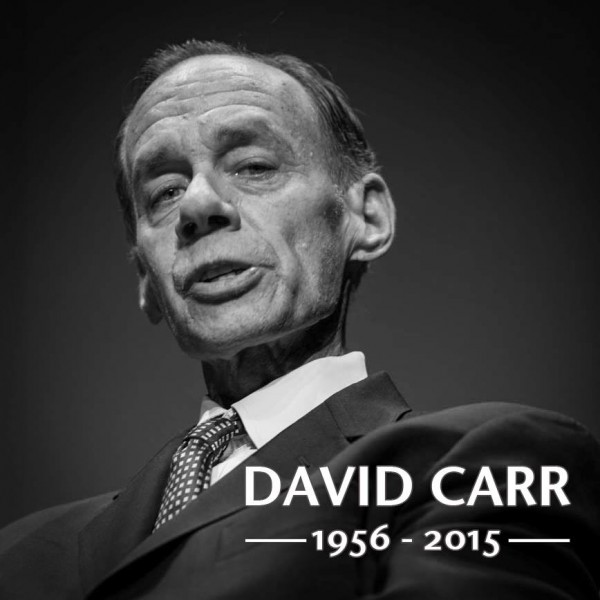 The New York Times reported that he collapsed in the newsroom Thursday evening and was taken to Roosevelt Hospital where he was pronounced dead. According to an autopsy report from the office of the chief medical examiner of New York, Carr died of complications from metastatic lung cancer. Heart disease also contributed to his death, according to the autopsy report.

Carr wrote the Times’ Media Equation column which explored the relationships between media, culture, technology, and business. He joined the Boston University journalism faculty in the fall of 2014 as a professor of media criticism in the College of Communication.

“David’s death is an immeasurable loss to his family, his friends, his colleagues in journalism and all of us here in COM, said Tom Fiedler, Dean of the College of Communication.  “He brought unique talents to Boston University and was just at the beginning of what I know would have been a brilliant new career as a teacher and inspiration to his students.”

“David called his course ‘The Present Future’ and designed it to encourage his students to grab the possibilities created by new communication technologies, to embrace change rather than shrink from it. He asked much in the way of effort from his students and he gave them even more in return. He was a truly unique individual, one who battled his own demons in ways that were inspirational to the rest of us. For now I offer condolences to his daughters, his wife and his family.”

Before joining the Times staff in 2002, Carr was a contributor at The Atlantic and New York magazine, and worked as the media editor for Inside.com. He spent five years as the editor of Washington City Paper, a Washington, D.C., alternative weekly, and two years at the Twin Cities Reader, a Minneapolis alternative weekly. In 2008, he published “The Night of the Gun,” a memoir about his battles with addiction and recovery.

Carr’s appointment to the journalism faculty at BU generated buzz and students had to apply to get into his classes. Those who did praised him as a professor. “David Carr went beyond being just a professor. He was a mentor and a friend in times when he didn’t need to be, but he did anyway,” said Prim Chuwiruch,  who took his course titled “Press Play” last fall.

After being appointed to the faculty at BU Carr continued work full time at the New York Times. He commuted to Boston to teach. BU journalism Prof. Chris Daly  said Carr telephoned last weekend and said that he had pneumonia. “His greatest worry was his Monday class. How was he going to get up here? What if he was too sick? Could he find a sub? These are things that a lot of famous people don’t worry about, but David was all bent out of shape over the thought that he might have to let our students down.”

“He invented a literary genre — the ‘reported memoir,'” said Daly. “Because he had abused so much alcohol and drugs, he recognized that he was an extremely unreliable narrator of his own life. So, he took on himself as a reporting challenge. He bravely pursued himself down some dark alleys. I think my favorite work of his is ‘The Night of the Gun.’ There is a radical honesty there that is unmistakable. It reminded me of Hunter S. Thompson.”
Daly described Carr as fearless. “He was a person who had been through so much in his life that he had no pretense about him. He was without fear, and he had a sense of urgency — almost as he felt that time was short. “

Clinton Nguyen, who was serving as Carr’s teaching assistant for the Spring semester, described Carr as “Bold, honest and wise. Usually not to a fault, and if he was, he was never short of humility. He was a professor who was still very much enveloped in the trade and involved with its movers and shakers day after day.”

“He had this fierce loyalty to anyone who did good by him, and that’s by far one of his most admirable traits. That always showed in the speakers he brought into class. He had this ‘go-get-’em’ attitude toward almost anyone who held the promise of making tremors in the media business.”

Mikaela Lefrak, who was Carr’s teaching assistant in the Fall, also had high praise for him and said she was deeply saddened by his passing. “As a teacher, he encouraged us to take risks, to not be lazy, to find our own strange little voices and use them to tell the biggest and most important stories we could find. He pushed us to be better writers, thinkers, and humans. He called his students his gang. He really cared. But most importantly, while David loved his work and his students, he loved his family best.”

Because BU has cancelled classes in the wake of back-to-back snowstorms for several weeks, Carr’s Spring class had met only once. Sonia Su, a Senior Journalism major who was enrolled in Carr’s class said: “The snow days made it so that we only had one class with him, but that one class was amazing. You could tell he was incredibly passionate about teaching and us students. The reaction [to his death] so far just shows how influential he was not just to journalists but people across industries.”

“I had watched Page One, but his fame wasn’t why I wanted to take his class. His incredible career and amazing insight were and still are so inspiring. What journalist wouldn’t jump at the opportunity to learn from him?” said Su.

Corby Kummer, who worked with Carr at the Atlantic said that Carr “Got in his first take what most people didn’t get even in their third. He was never not working, but he knew how to take off, observe the scene. His loyalty to the standards of the Times was unbounded—as completely engaged as he was when I worked with him at The Atlantic, he found his real home there and made it a home for many others, as he’d made City Paper a home for young talent and a generation of writers who found themselves through his seemingly merciless, but extremely merciful, compassionate, caring discipline: Brett Anderson, Ta-Nehisi Coates, Amanda Ripley, many others. His mark was wide and deep because he cared so widely and deeply.”

Carr lived in Montclair, N.J. He leaves his wife, Jill Rooney Carr, and three daughters, twins Erin and Meagan, and Maddie, a BU freshman. Carr’s wake is scheduled for February 16 at Frank E. Campbell Funeral Chapel in New York City, and his funeral will be held on February 17 at the Church of St. Ignatius Loyola on Park Avenue. BU’s College of Communication will hold a remembrance service for Carr on Feburary 18 at 1 p.m. in COM 101.

Correction: An earlier version of this story misspelled the names of Mikaela Lefrak and Carr’s daughter Meagan.

Posted by: Meggie Quackenbush on February 12, 2015