BOSTON – The mayor of Boston has been alerted of a possible disease outbreak. The threat is grave. He assigns a team of epidemiologists to comb through medical records to find the most likely source of the infection and report back. They have four days.

The team begins by looking for spikes in reported diseases in the past week. They find that salmonella had an unusually high number of reports. Following this thread, they request additional information from each salmonella patient: what they’ve eaten, where they’ve eaten, and where they’ve been in recent days. As the deadline looms, signs point to one origin. All of the patients had recently eaten at either a Jamaica Plain restaurant named Sustain or at the same restaurant’s booth at the JP Food Festival last week. The team gives their assessment and the simulation ends. 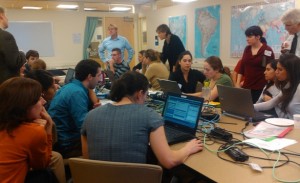 One recent Thursday, more than 20 BU students and faculty gathered in a conference room at Crosstown Center Building on the Medical Campus. There, they played a “serious” video game created by MIT’s Lincoln Lab, called the Epidemiological Disease Investigation Game (EpiDIG). The game simulated the experience epidemiologists often face while trying to locate a disease outbreak. Players had to work with teammates to find disease anomalies in millions of medical records and trace their origin. The four-day time limit in the game was compressed into one and a half hours in real time.

Natalie Morgenstern, a grad student studying epidemiology and biostatistics in the BU School of Public Health, called the game was a great learning experience. Having to make rapid decisions and to work effectively with her team to find answers made it almost feel real.

“I was completely engaged in the game,” said Morgenstern.

She added that the simulation allowed her to practice the skills that she learned in her classes but had not had a chance to use in real life.

“This is the first time I really felt like I’ve gotten my hands dirty.”

Lincoln Lab developed EpiDIG based on another simulation it built for the Department of Defense called Homeland Enhanced Attribution Testbed (HEAT). The original game tasked players with using simulated data to track and find likely criminals in a large group. Lincoln Lab, working closely with the Boston Public Health Commission, converted the game into a tool to help epidemiologists practice tracking disease outbreaks.

Timothy Dasey, who led the group at Lincoln Lab under which the project was developed, said the game replicates real-life situations that epidemiology students will have to face in their future jobs. It can give them experience that would otherwise take years to acquire.

“I think the ability for those in public health to adapt to new situations and to work well in teams is something they’ll need to do their jobs. But it takes years and years to learn,” said Dasey. “The intent is to give them virtual experience.”

EpiDIG, however, has run out of funding and is still unfinished. Dasey said he wants to develop the game further to incorporate more diseases and a greater variety of situations. Maybe Lincoln Lab will eventually be able to give it to students and institutions.

“I want to get to a point where we can hand it off to public health institutions and hospitals and let them use it,” said Dasey.

Lincoln Lab had already shown the game to many epidemiological groups. Last year, they brought it to the International Society of Disease Surveillance conference to show to leading epidemiologists around the world. There, they met some BU public health grad students who suggested that BU host an EpiDIG simulation at the school.

Christopher Gill, associate professor at BU School of Public Health, supported an event to test the game with BU students. He even participated in the game himself. Afterwards, Gill said he thought the game was a good learning tool for students.

“This is a very innovative way of teaching decision-making skills in a real scenario,” he said. “We were given all of the data so we just had to figure out which questions to ask.”

Gill said that he wants to hold more of these types of events with EpiDIG. He would also like to see the game, one day, incorporated into Disease Outbreak classes at BU and to even have BU students work with Lincoln Lab to improve the game. EpiDIG can be an important tool because it gives students a taste of the real world, according to Gill.

“It was the kind of education experience that we should be seeing more of in public health institutions.”

This article is being published under an arrangement between the Boston Globe and the Boston University News Service.