“For seven dollars you can play ‘til we close.” A chorus of bells, sirens and flippers makes it difficult to understand Liz Moore as she explains the rules to me.

Pop Bumpers is a seven-day-old business started by a local husband and wife in what used to be a hair salon in Weymouth, Massachusetts. The one-room enterprise is illuminated by the large storefront window. The only other light comes from a row of ten vintage pinball machines—the source of the racket. 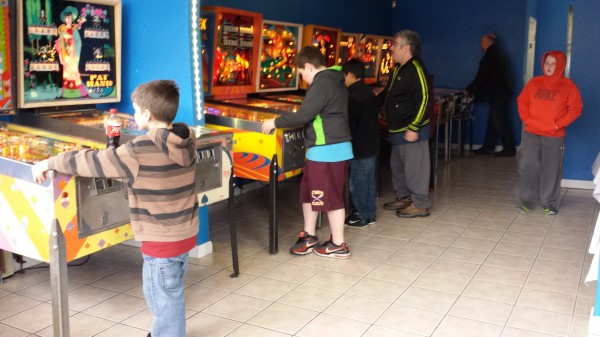 I’m standing in front of a machine called Eight Ball, looking up at its artwork. It depicts a Fonzie-esque-character in leather jacket and jeans and a redhead wearing a button-down shirt tied off at the midriff.  It appears her buttons were decorative though, because she has neglected to use any of them—a fact highlighted by the way she leans over the pool table towards me. My current score, 000000, is displayed next to her face. It’s the only digital part of the game.

I’m a bit daunted by the entire prospect. Until this point, the majority of my pinball experience had been gleaned from Space Cadet 3D Pinball, an electronic simulator that shipped with Windows 95.

The playing surface doesn’t look very different from Space Cadet: there are two buttons that operate the flippers and a variety of bumpers, ramps, and pockets for the ball to navigate. However, the experience couldn’t feel more opposite—the jolting of bumpers, the twitchy thwack of the flippers—I even pick up the vibrations from the ball rolling across the playing surface.

Space Cadet taught me the principle of tilting in pinball. The “X” and “.” keys were used to accomplish this feat, a simplification which, until this point, I had taken for granted. I discover it’s easier to tilt Eight Ball if I widen my stance and use my hips for leverage. Consequently I soon find myself, sort of, dry-humping a 300 pound mechanical beast while surrounded by elementary schoolers.

In modern video games, crashing a racecar feels no different than kicking a field goal—a vibrating controller in your palms. Getting stabbed feels same as falling off a horse, but neither hurts in the slightest. To date, nobody has created a realistic, digital sense of touch—a field of study called haptics. Even the best haptic systems only give pressure feedback—there’s no pain or temperature communicated to the user. Our very best prosthetic hands are only now becoming sophisticated enough to even detect a soft foam block placed in the palm.