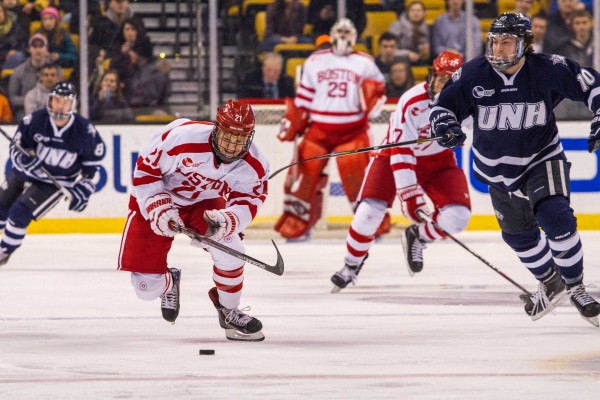 It was six years ago that a deflected Colby Cohen shot eluded Miami (Ohio) goaltender Cody Reichard in overtime of the 2009 NCAA national championship game to give BU the national title. The goal sealed the most improbable of improbable comebacks, after the Terriers were down 3-1 after 59 minutes of regulation.

The ’09 squad was brought up multiple times during the Hockey East championship weekend at the TD Garden, where BU faces North Dakota Thursday night in the NCAA semifinal. The 2009 team was the last great team to don the scarlet-and-white, going 35-6-4. Ten players from that team have played in an NHL game.

“It might be a little bit different game, even though that was only six years ago, but there are some definite similarities [between the two teams],” said BU head coach David Quinn, who was the associate head coach to Jack Parker in 2009.

Until this season, the ’09 Terriers were the last team to win the Beanpot, gain the top overall seed in Hockey East tournament in addition to hoisting the Lamiorello Trophy. Matt Gilroy won the Hobey Baker Award that season, the most recent Terrier to do so. It’s almost inevitable that Jack Eichel will join Gilroy and Chris Drury (1998) as BU Hobey-winners when this year’s award is handed out Friday night.

When the Terriers knocked off Minnesota-Duluth in the Northeast Regional final, it put them in the Frozen Four for the first time since Barack Obama’s first year in the oval office.

Of the ‘definite similarities’ Quinn pointed out, the character of the two teams correlate.

The 2009 squad was led by Gilroy, who was told by Parker not to bother trying out for the team. Little did Parker know this kid from Long Island who couldn’t play in the Iron League would win the Hobey Baker. With one minute to go in the national title game, the Terriers were losing 3-1. Zach Cohen and Nick Bonino scored in the final 59 seconds to force overtime. Colby Cohen’s goal 11:47 into the extra session ended it.

This year’s squad has outscored opponents in the third period by a 68-25 margin. Seniors Cason Hohmann and Evan Rodrigues went through a coaching change as sophomores with the retirement of Parker. As juniors, they played on a team that won 10 games. In their senior season, everything came together. And Quinn has spoken volumes of the two all season, as well as junior captain Matt Grzelcyk.

“I can’t talk enough about our two seniors and our captain,” said Quinn following BU’s 4-3 overtime win over Northeastern in the Beanpot final. “After what we went through last year as a group and the season we had, to come back in the fashion that we have, without question has everything to do with [Rodrigues and Grzelcyk] and Cason Hohmann.”

In both 2008-09, BU was tops in the nation in scoring, averaging 3.93 goals per game. They Terriers entered this year’s tournament atop the land in offense, averaging 3.89.

The big difference between the two teams was how spread out the scoring was. The 2009 Terriers had 16 players crack the double-digit point mark, with 11 cracking 20. Twelve players on this year’s team have 10 or more points, with six above 20. Eichel (24-43–67) and Evan Rodrigues (21-40–61), first and second in the nation in scoring, respectively, account for 31 percent of BU’s scoring.

Eichel not only has been the best player in the country this season, he’s been one of the best players to come through college hockey in decades. The 18-year-old freshman from North Chelmsford is a projected top-two pick in the upcoming NHL Draft, and that’s only because the 2015 class features Connor McDavid, tabbed as the best player to come out of Canada since Pittsburgh Penguins center Sidney Crosby was taken first overall as a 17-year-old in 2005.

That’s not to say the Terriers are top-heavy. While the BU fearsome-threesome atop the lineup in Eichel, Rodrigues, and Danny O’Regan (22-26–48) have factored in about two of every five goals scored by the Terriers in 2014-15, Quinn’s group hasn’t been a one-line club.

“We had a lot of depth up front on that ’09 team, we have depth on this team,” said Quinn. “I don’t think we score as easily as that team did, but we can score goals.”

When Robbie Baillaregeon returned in January from a bout with mono, the sophomore pivot centered the second line with Ahti Oksanen and Cason Hohmann on the wings, and was as productive a second line as you could find. Since being moved up to the second line in a line shakeup by Quinn prior to the conference semifinals, A.J. Greer has provided a spark on the line, now centered by Hohmann. Matt Lane, Nikolas Olsson have been reliable third-line players. Nick Roberto has been a key bottom-six contributor.

On the back end, defenseman Matt Grzelcyk has been a point-per-game player this season, with 37 points in 39 games. Freshman blueliners Brandon Hickey (5-11–16) and Brandon Fortunato (1-17–18) combined for 34 points.

“I guess they’re kind of like those big brothers that we kind of look up to,” said goaltender Matt O’Connor of the 2009 team. “And that team really set the tone and showed us how to play in the postseason.”

Good hockey teams are built from the net-out. BU makes a good case for that premise. O’Connor came into the 2014-15 season after splitting time with Sean Maguire in net for his first two seasons. In 41 games, the netminder put up a 2.88 GAA and .916 save percentage. Solid numbers, but not enough to make anybody forget about Jim Craig, Rick DiPietro, or John Curry.

With Maguire sitting out as a medical redshirt, it was up to O’Connor to take ownership of the Terriers crease. And he did just that. In 31 games, O’Connor is 24-3-4 with a 2.10 GAA and .928 save percentage. Since being pulled after allowing five goals on 25 shots in a 6-5 loss to Northeastern on Feb. 27, the junior netminder has allowed 11 goals in seven games, stopping pucks at a .939 rate.

With BU being outplayed by UNH in the opening period of the conference semifinal game, O’Connor was airtight between the pipes, turning aside 10 of 11 shots, quite a few of which were quality scoring opportunities. It kept the game tied 1-1 after 20 en route to the Terriers 4-1 victory.

“If it wasn’t for [O’Connor] that game could’ve got out of control in a hurry,” said Quinn following the win.

The Terriers were no different in 2009, when freshman Kieran Millan allowed less than two goals per game (1.93 GAA) while posting a .921 save percentage. Millan was behind a blue line that featured Gilroy, Cohen, Kevin Shattenkirk, Dave Warsofsky, Brian Strait, and Eric Gryba, all of whom went on to play in the NHL,

With a group much younger — Grzelcyk was the elder statesman of the unit entering the season, with a year-and-a-half of college hockey to his credit — the Terriers have allowed 2.26 goals per game, 12th in the country. Freshmen John MacLeod and Hickey have played beyond their years. Fortunato has emerged as a reliable top-four, puck-moving defenseman. Brien Diffley has been half of a strong third pairing with Doyle Somerby, who has been one of BU’s best players during the postseason run.

The opponent for BU is North Dakota on Thursday night for the right to return to the national title game. North Dakota is a team not dissimilar to the ’09 Terriers. NoDak (29-9-3) have 13 upperclassmen on its roster, eight of whom are seniors. While Drake Caggiula is the leading scorer with 36 points, North Dakota has 16 players with 10 or more points, nine with 20. Goalie Zane McIntyre has played all 41 games this season, allowing goals at clip of less than two goals per game.

A BU win on Thursday night garners a Saturday night matchup against either the youthful Nebraska-Omaha or veteran Providence.

Like the previous BU team to go this far, there’s plenty of reason not to count these Terriers out.